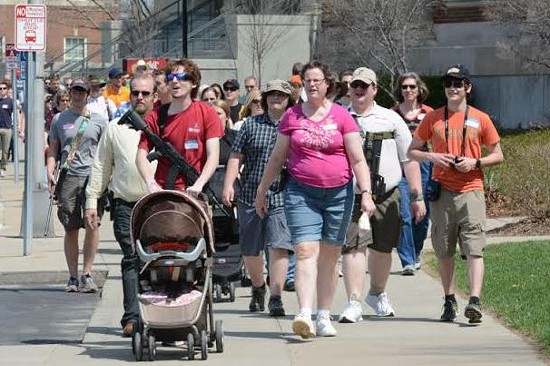 Courtesy of Jeffry Smith
Who wants to get strapped for a stroll?

The current landscape of Missouri gun law is confusing.

Last month, state legislators overrode Governor Jay Nixon's veto on a bill that instantly erased all regional bans on open carrying firearms. Then, add the passing of Amendment 5, which enshrined all Missouri gun laws as "unalienable," and it would appear that gun rights in the Show Me state have never been stronger.

But nobody in Missouri -- including law enforcement and St. Louis city officials -- seems to understand the true scope of these new gun laws, says Jeffry Smith, a firearms activist and instructor from Ohio. Smith is leading an "Open Carry/Firearms Educational Walk" this weekend in downtown St. Louis, saying he wants Missourians to know their constitution provides a fundamental right to open carry firearms, even without a concealed carry permit. He and potentially dozens of local and out-of-state activists want to prove their point by taking a "friendly" jaunt with their guns through Citygarden and the Gateway Arch on October 25.

Update: See below for interviews with St. Louis police chief Sam Dotson and a federal ranger at the Gateway Arch.

"The purpose of this walk is educational, and it's also to test the meaning of Amendment 5," says Smith, who's requested attendees leave their militia flags, "Don't Tread on Me" banners and camouflage gear at home.

For those in need of a refresher on Amendment 5, the measure made it onto the August 5 primary election ballot and passed with 60 percent of the vote. The amendment didn't just reaffirm existing state gun laws or rights granted by in the U.S. Constitution's Second Amendment -- it applied the highest possible legal barrier on changing or restricting existing firearms laws.

The other big gun bill passed this year, SB 656, declared anyone with a concealed carry license can now also open carry. However, Smith tells Daily RFT he plans to completely rely on Amendment 5. He doesn't believe he needs a concealed carry permit to legally walk around downtown as an armed pedestrian.

"Amendment 5, it's the next level up in laws," Smith says. "It's the thing at the top of the food chain."

But Smith isn't simply planning on showing up at the Gateway Arch with a bunch of rifles. According to email correspondence shared with Daily RFT, Smith sent legal notices to the St. Louis city counselor's office weeks ago, and he has yet to receive a response to his questions. No one seems to know if openly carrying guns at the city's biggest tourist spots requires a concealed carry license or, as Smith believes, if all open carrying is covered by the broad language of Amendment 5.

Daily RFT has reached out repeatedly to Missouri's Attorney General's office, the St. Louis city counselor and the St. Louis Metropolitan Police Department, but we've also gotten no answer on how St. Louis will adapt to the state's new, free-wheeling open carry laws. We'll update the story if we hear back.

In an email, city spokeswoman Maggie Crane wrote that "nothing is finalized," and that the city is still reviewing permits for Saturday's event.

Smith tells Daily RFT the city's treatment of the new open carry laws smacks of "intentional indifference," and that he's willing to be arrested in order to expose St. Louis' mishandling of the new state gun laws. He also says he's confused by the "permits" Crane referenced in her email, since he didn't apply for any.

Smith's aggravation is shared by Richard Lofftus, a local firearms activist from St. Charles who teamed up with Smith to publicize the walk. Lofftus says wants local municipalities to address the new laws and eliminate confusion.

"It's frustrating that they seem to be ignoring it like it didn't happen. There doesn't seem to be any push or discussions to turn the laws around," he says. "We want them to clean up the books and make things compliant. If they don't, they're just intimating people out of their rights."

Both Lofftus and Smith clarified that their walk isn't a political protest, and that attendees won't be antagonizing pedestrians or blocking traffic.

"This walk is for the people of Missouri," says Lofftus. "You don't have to be intimidated. Your freedoms are no longer dictated by your geographic location in the state of Missouri."

Dotson declined to comment on Smith's argument that Amendment 5 allows people to open carry in Missouri without a concealed carry license.

Though his officers won't be setting up permit or ID checkpoints, Dotson says additional officers wearing yellow vests will be downtown tomorrow afternoon, and that he "hopes everybody has a concealed carry license" at the walk

"This group has the right to have their voices heard, and what they're proposing to do is perfectly legal," he says. "What you will see downtown tomorrow is increased police presence."

It's worth noting that Dotson is a vocal and active opponent of Missouri's current gun laws, which he characterizes as "some of the most lax" in the country. He says open carrying firearms around downtown St. Louis will give the city a bad image.

"I believe it gives St. Louis the impression that it is a wild west town where you can strap a six shooter to your hip and walk down Market Street," he says. "But in a city that's seen violence and increasing homicide, more guns doesn't seem like the solution to me."

In June, Dotson sued to strike Amendment 5 from the August 5 ballot. The suit argued that Amendment 5's ballot language failed to describe the full effects of passing the measure into law. Though the lawsuit failed to convince a circuit court judge, Dotson maintains that the ballot's language misled voters. Dotson is appealing the decision to the Missouri Supreme Court.

Continue for an interview with a federal ranger at the Gateway Arch.