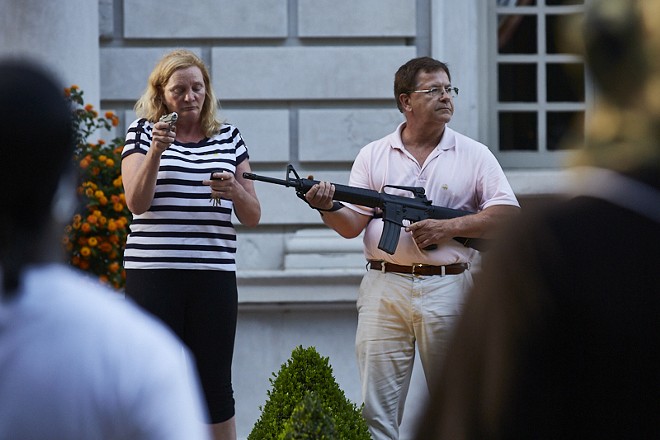 
As hundreds of protesters marched toward Mayor Lyda Krewson's house this evening they were met by a surprising sight — a gun-swinging couple on the lawn of their Central West End mansion.

The couple, personal injury attorneys Mark and Patricia McCloskey, shouted at marchers who seemed to be just passing through the gated community.

The protesters were walking to Krewson's house for a demonstration, part of the backlash the mayor is facing for broadcasting on Facebook Live the names and addresses of advocates for defunding the police department.

Multiple people marching tonight filmed the scene in front of the McCloskeys, and various angles show the couple sweeping their weapons in the direction of protesters who were standing on the sidewalk or walking past. 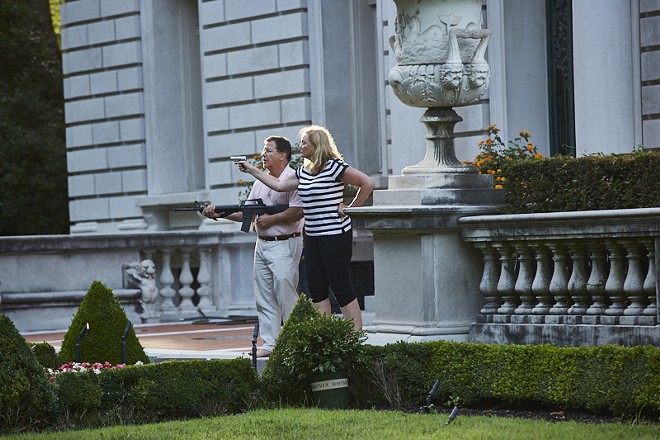 THEO WELLING
Patricia and Mark McCloskey in front of their home in the Central West End.

At one point, a barefoot Patricia, whose law firm bio says she is a member of the Missouri Bar Association ethical review panel, crosses the lawn and stumbles briefly while she has her gun aimed at protesters. It's not clear if the guns were loaded.

The McCloskeys are apparently very proud of their house, welcoming St. Louis Magazine in 2018 for a tour of the Renaissance-style palazzo that was originally built by a Busch heiress and her husband, but it's unclear what prompted them to grab their guns and pop out front, shoeless but armed, to confront nonviolent protesters.

We called the after-hours number for the couple's law firm, and a woman answering the phone said the McCloskeys couldn't be reached until morning.

After the brief, but intense encounter, marchers continued down the street. Some in the crowd shouted, "Let's go! Let's go!" at stragglers.

The procession continued to Krewson's house, where hundreds of people filled the street, extending into her yard and front porch. Activists have called for her resignation for doxxing her constituents on Friday. After initially declining to say she was sorry, the mayor issued an apology through social media and news outlets on Friday night.

Correction: We misidentified the magazine of Mark McCloskey's rifle as a clip in the original story. Sorry about that.