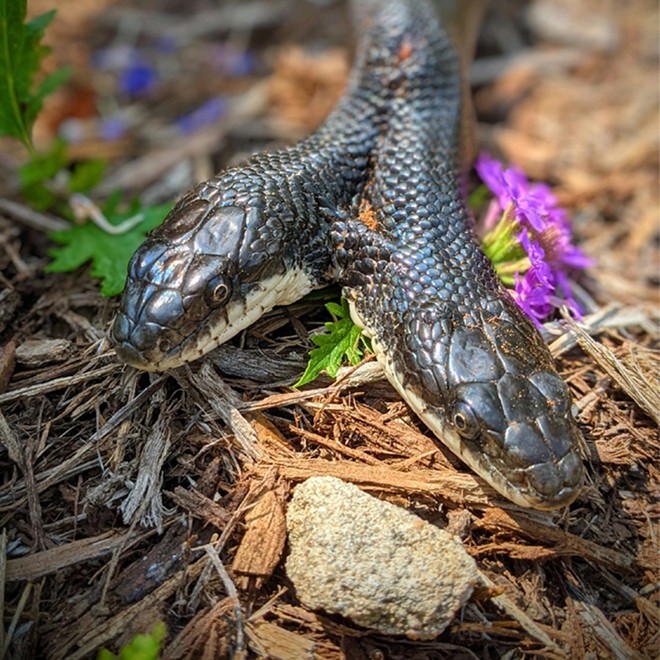 Courtesy of the Missouri Department of Conservation
It's her "Ssssweet Sssixteen."

A rare two-headed snake is celebrating its sixteenth birthday this weekend — an especially sweet milestone for the birthday girl, a female black rat snake who has survived despite its two heads not always being on the same page.

"We have a very special process for feeding her," Cape Girardeau Nature Center Assistant Manager Jamie Koehler told WSIL-TV. "We'll cover one head up with a cup and feed the other head, and then we reverse the process."

Indeed, with two brains sharing one digestive system, things can get tense between her two heads, which compete for food and direction.

While snakes do have a pretty notable instance of, um, multiple organs, two-headed snakes such as this — a rare result of twin snakes becoming conjoined during development — generally do quite badly in nature. 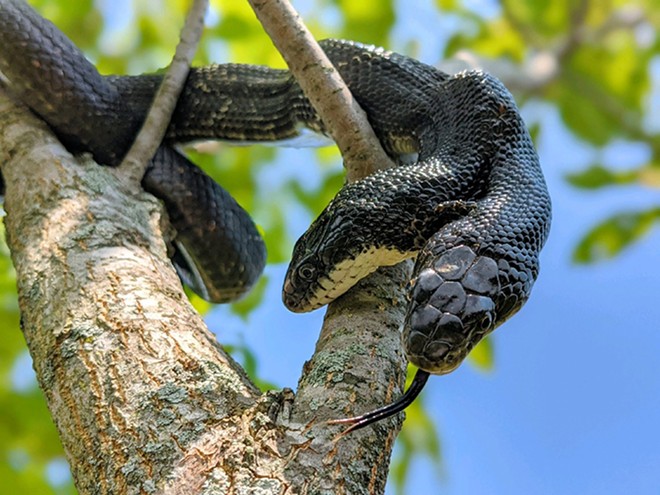 Courtesy of the Missouri Department of Conservation
Sssshe wants the keys to the car.

In a blog post, Missouri Department of Conservation naturalist Alex Holmes explained this sort of "conjoined twinning" is only recorded in one in every 100,000 black rat snake births. In the wild, Holmes said, these snakes wouldn’t be able to escape predators "due to their body’s lack of dominant leadership."

But this particular snake has beaten the odds, and its sixteen years appears to make it one of the oldest two-headed snakes on record. St. Louisans may remember "WE," a two-headed albino rat snake that thrilled visitors at the City Museum before it passed away from natural causes at age eight in 2007.

In an email, Cape Girardeau naturalist Laci Prucinsky said the snake has never been named, writing, "We usually refer to them as the two-headed black rat snake."

Whatever you call them, the girls will be partying this weekend at the Cape Girardeau Conservation Nature Center, which is hosting a "Ssssweet Sssixteen Birthday Party" on Saturday from 1 to 3 pm — including "a meet-and-greet with the twins."