The group of major companies that runs St. Louis needs to get out of the real estate business.

That’s a strange sentence to write. I’m guessing it’s a puzzling one to read. But 18 months into the grand experiment known as Greater St. Louis Inc., it is more apparent than ever that its promised dramatic overhaul of the region’s civic structure has a fatal flaw.

That flaw is known — or not known — as the Arch to Park Equity Fund LLC. It is a private, for-profit company that invests in real estate. It’s also a central enterprise of GSL, the not-for-profit group of companies that presumes to provide vision and leadership for economic development in the St. Louis region.

The co-mingling of a powerful civic organization with a powerful real estate company destroys any pretense of impartiality on development issues that groups like GSL focus upon. That’s not a sexy issue, but it’s a big one.

In its articles of incorporation, GSL — a merger of the St. Louis Regional Chamber, AllianceSTL, Civic Progress, Downtown STL Inc. and Arch to Park — mentions a focus on the area’s “urban core.” But they also reference GSL being “operated exclusively to promote the common business interests, growth and opportunity, and the general economic welfare for businesses in the St. Louis metropolitan area.” (Emphasis added.)

Catch up on Hartmann's columns here.

The Arch to Park fund’s stated mission is to provide “patient capital” to development projects that otherwise could not find it. That might seem great news for a region dotted with pockets of poverty and despair that could use a guardian angel like that.

But it turns out that the fund is limited by charter to investing in projects in the city’s urban core. What a terrible fit for GSL, which bills itself as the unifying voice of the sprawling metropolitan area of 15 counties. What about the patient-capital needs of those other counties and parts of the city?

Since it’s a private company, there’s little to report definitively about Arch to Park. It was spearheaded by Enterprise CEO Andrew Taylor, the most revered civic leader in St. Louis, who reportedly has the largest investment stake in the fund, by far. Taylor, the driving force behind GSL, remains its dominant leader.

The fund counts among its investors a who’s who of untouchable St. Louis companies and institutions, from the Cardinals to the major universities to Schnucks and others. Again, details of the fund’s structure are a private matter. 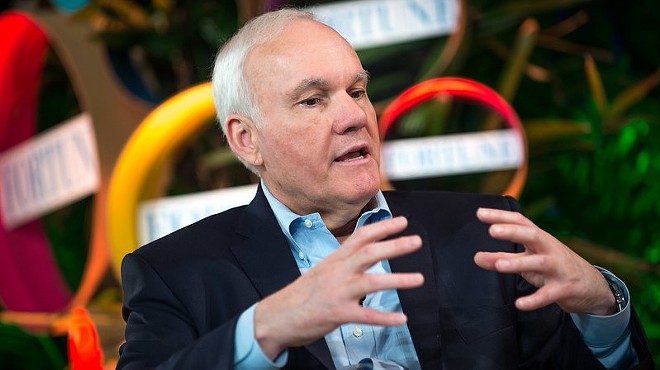 But the fund seems to have developed a particular fondness for the area immediately around the new MLS soccer stadium.

What a happy coincidence. The soccer franchise and stadium are widely regarded as a generous gift to the community from Taylor and his family. No one with a brain would question that.

As reported last week in the local media, AHM group, a locally based developer, has advanced an exciting new proposal within a short walk of the stadium. It hopes to build up to 500 apartments and 30,000 square feet of office space, and another 25,000 to 30,000 square feet for restaurants and retail.

Buried deep in a Business Journal story was this: “AHM was able to buy the [needed] sites using money from Greater St. Louis Inc.'s Arch to Equity Fund, a patient capital fund designed to encourage development for large projects. Greater St. Louis Inc. declined to say how much capital they invested in the project.”

Other media dutifully reported the same point in passing: GSL isn’t answering questions on the details of its investment. OK bye.

What an act of civic benevolence by GSL.

Is it really though? The soccer stadium is one of the most exciting local developments in years. The area around it is arguably the hottest real estate game in town. Whatever virtues investors might need there, patience isn’t high on the list.

And there is that pesky GSL bylaw about “exclusively” serving the needs of the metropolitan area. Not certain how a project near the stadium does that.

Let’s assume that 500 new tenants decide to relocate to a downtown area wracked with a terrible reputation for crime — a short walk from where thousands of strangers will be coming to and from a stadium (always a valued amenity). From where do you suppose these people would be relocating?

In a city with declining population and a region that’s largely stagnant, I’m going to go with “somewhere else in the 15-county region served by GSL.” Unless folks will be moving to St. Louis in excitement over the new MLS stadium.

Now, there’s nothing wrong with the Arch to Park moguls doing whatever they want with their money. But there’s plenty wrong with GSL favoring one part of the metropolitan area at the expense of another.

And the lack of transparency is even worse. Not-for-profit groups must disclose financial activities annually with IRS Form 990 detailing the size of their operation, compensation of key employees, top vendors and so forth. Profit-making companies file nothing.

GSL will be filing its first-ever Form 990 in the next several months, having availed itself of a six-month extension to which it was entitled at the filing deadline in May. But that reporting is essentially meaningless without knowing who benefits how much from the non-disclosed spending of the fund it manages.

GSL hotly denies this. Last week, spokesman Tony Wyche repeated what has been said before: GSL does not earn a dime from the fund. GSL only manages the Arch to Park fund, and purely at its costs, which are reimbursed. GSL makes no decisions as to the investment decisions of the fund.

He added this: “I will add that Arch to Park Equity Fund LLC has no employees.”

Wow. Maybe robots are running it?

So, let's get this straight. GSL is managing a private, for-profit real estate fund at cost, out of the kindness of its heart? Why? And what does "managing" mean if GSL isn't making subjective investment decisions picking winners and losers in the region? Finally, would GSL provide this sort of management help to other real estate funds in the region should they request it?

Understand this is a St. Louis thing. No other major region has an overarching chamber of commerce with a Civic Progress–style organization operating a real estate side hustle out of its office.

In the process of making unwelcome inquiries to GSL, I was told by Wyche, “Your questions have been asked and answered on MULTIPLE occasions. But you seem entirely unwilling to accept what we have provided you.”

That’s true. I have not accepted the bogus answer that what GSL is doing is no different than other cities. Last week Wyche reiterated that Greater Cleveland Partnership and GSL “operate almost identical to one another.” He cited its relationship with the Cleveland Development Partners as analogous to GSL and Arch to Park.

Bad example. I looked it up, something that GSL, with all its clout, can count on the mainstream media not to do. (The Post-Dispatch, for example, is listed as a major GSL investor in the $50,000 to $99,000 range).

Cleveland’s situation turns out to be precisely the opposite of St. Louis. Both of its organizations are not-for-profits fully disclosing their financials to the public annually. They both file Form 990s. The comparison could not be falser.

I’m not sure which is worse: that Arch to Park is a for-profit company and as such totally unaccountable to the public, or that GSL has a problem being accurate about the uniqueness of its situation.

GSL continues to duck the question as to why its real-estate fund wasn’t set up as a transparent not-for-profit. Maybe the answer is worse than St. Louis can be allowed to know.