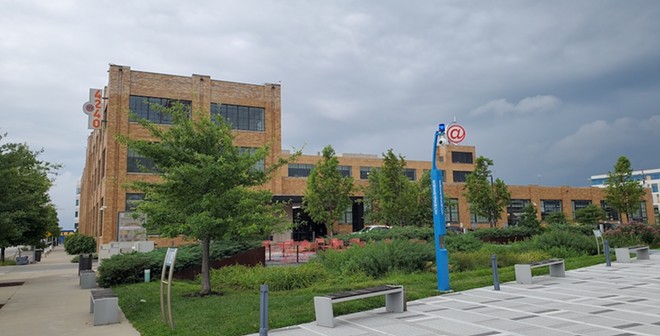 In just 20 years, the innovation hub known as Cortex has emerged as one of the proudest examples of what civic and corporate St. Louis can be at their best.

Now, the politics of Cortex are showing them at their worst.

Anchored by behemoths Washington University, Saint Louis University and BJC HealthCare, as well as the Missouri Botanical Garden and University of Missouri-St. Louis, Cortex has produced striking success as a magnet for emerging companies and endeavors, especially in the tech sector. It has evolved into a valuable asset to the region.

Cortex has fallen short of its initial projections. But when it was founded in 2002, no one could have foreseen the magnitude of the 2008 real estate crash, Ferguson and the COVID-19 pandemic. To succeed at all in the face of such extraordinary hurdles was no mean feat.

So, Cortex is struggling a bit today. Its vacancy rates for commercial space are high. At least three of its Redevelopment Project Areas have gone undeveloped, and the 20-year tax-increment-financing authority initially granted to them expires next year.

On July 13, Cortex leaders held a Zoom meeting with the city’s Tax Increment Financing Commission, a little-known citizen board designed to protect the interests of city residents and property-tax recipients, most notably the public schools, since TIF diverts tax money from redevelopment projects that could go to schools to finance redevelopment costs. The commission plays an important role in negotiating with developers to refine their TIF requests to reflect community priorities — before these make it to the Board of Aldermen.

Cortex made two key asks: one for TIF handouts on a 160-unit residential development by Keeley Properties at Clayton Avenue and Sarah Street, the other a galling request to bypass the commission altogether to expedite approval of two RPAs for which TIF authorization expires next year. The term of art for this is “blank check.”

Both requests are awful. Cortex and its developers can build whatever they want with their resources. But it’s a nonstarter for the city government to give those interests — or their developers — special advantages beyond those they already enjoy as a largely property-tax-free enterprise.

A spanking-new 160-unit apartment building in the desirable Cortex area would largely attract tenants from other places in the city. New renters can hardly be expected to migrate to the city from surrounding counties anytime soon.

At best that means the TIF-aided building would represent a zero-sum game to the city. At worst it would crush other apartment buildings or small real estate investors in places like Soulard, Lafayette Square, downtown and north city.

That blank check — nicknamed “trust us” — is worse. Cortex had almost 20 years to meet its legally established TIF deadlines. Now Cortex is acting as if its dog ate its homework.

The $79 million in TIF incentives for Cortex’s unfinished redevelopment can be allowed to “expire without utilization.” This isn’t the end of the world. All it means is that Cortex would have to restart the TIF application process, which would entail asking for another round of tax breaks against the backdrop of a revitalized area of the city that doesn’t quite scream out “blighted.”

Cortex would have to endure a costly and time-consuming return to the drawing board. And in a more perfect world, it will fail to obtain more TIF funding on the backs of school kids because of a simple fact of life: Cortex doesn’t need it. Sorry for the heresy.

Normally, when Cortex says jump, politicians reply “How high?” and that’s the end of it. But there’s a new alderwoman in the 17th Ward where Cortex resides — Tina “Sweet T” Pihl — and she’s like nothing St. Louis or Cortex has ever seen.

First elected in 2021, Pihl sports an astonishing resume. She has worked in city-planning posts in Boulder and Denver, Colorado, and also has prior experience in Boston and Washington, D.C. She earned a bachelor’s degree in architecture with a focus on affordable housing from Yale and a master’s in urban studies and planning from MIT.

And now she’s dealing with a bunch of yahoos who assume that Yale and MIT surely must each promote themselves as “the Washington University of the Northeast.”

So, Pihl, a political neophyte, had the audacity not to play the subservient role to which any public official in the city — especially a new one — is traditionally assigned. Cortex said “jump” and she responded, “Why wasn’t I told about this Zoom meeting?” Cortex said, “Here are the items we require from the city,” and Pihl said, “I need to crunch the numbers to see if this makes sense.”

I happened to watch the Zoom call when Pihl delivered those messages. Give credit to the Cortex leaders, developers and city officials on the call: None of their blank stares devolved into heads actually exploding.

Now, here’s the problem: Pihl has the advantage — or, politically, the extreme disadvantage — of having seen how city planning is done in other cities that are, let’s say, a tad more sophisticated than St. Louis. “City planning” is an oxymoron here.

Pihl’s colleagues on the Board of Aldermen customarily punt development questions to the not-ready-for-primetime players at the St. Louis Development Corporation. Not always, but usually.

In speaking with her, it was clear that her previous experiences in more serious cities had not prepared her for how things are done here. “SLDC does not have a robust mechanism for analyzing these tax-incentive projects,” Pihl says. “The SLDC facilitates development rather than evaluating development. That’s not right.”

Now, what is this robust mechanism thing you speak of? You seem to have come here from strange lands.

Pihl paid the price for poking the wrong bears. As only a lapdog daily newspaper would, the St. Louis Post-Dispatch rushed to attack Pihl for her uppity behavior.

The Post unloaded two scathing news stories within hours of each other attacking Pihl online. And an editorial-page scolding followed. One article blasted Pihl for having been slow to respond to developers. The other implied that Pihl was about to destroy the tech sector as we know it.

What the Post didn’t mention is that it’s a major investor in Greater St. Louis Inc., the new civic leadership organization that is heavily interlocked with Cortex. (Basic journalistic ethics require such disclosure.)

It is hardly a secret that GSL’s for-profit real estate side hustle — Arch to Park Equity Fund LLC — regards bolstering Cortex as a top priority, second only to the new MLS stadium. The public can’t be certain of Arch to Park’s priorities, because they are shielded from public view by its for-profit status — unlike its counterparts in other major cities.

It’s no coincidence that the Post rushed to soothe Cortex. But that’s not the big problem here. What’s really messed up is this: No one has the guts to challenge the premise that some of St. Louis’ wealthiest and most powerful institutions — with assets collectively in the billions — continue to demand public assistance in the form of tax relief that they do not need.

The last people to blame are the politicians. When local giants with the political clout of GSL and Cortex make demands, politicians are reduced to bit players with scant choice in the matter. The solution is simple: Powerful people need to stop demanding stuff from government that they don’t need.

Their sense of entitlement is appalling.

Tina “Sweet T” Pihl and the strange notions she brings from faraway lands are the least of our problems.