Hartmann: Jana Elementary’s Quick Closure May Be Too Little, Too Late

Since 1989, the feds have pretended to be serious about Coldwater Creek. Yet here we are 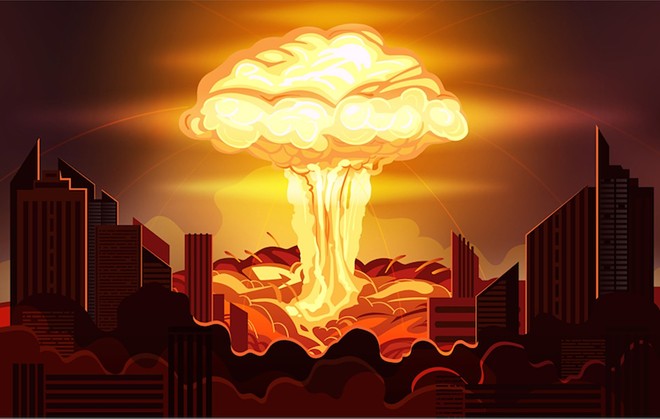 N MACTAVISH
Waste from the Manhattan Project continues to poison St. Louis' Coldwater Creek — even though the federal government first reported that contamination in 1989.

The bombshell news story that just gripped St. Louis with fear over nuclear radiation was a little late in uncovering shocking revelations.

Fifty years late, to be specific. And 80 years late dating back to the original sin.

KMOV first reported on October 15 that Boston Chemical Data Corp. had discovered unsafe levels of radioactive waste at Jana Elementary School in the Hazelwood School District. The independent analysis found 22 times the expected level of the poisonous waste inside the school.

Three days after the KMOV story broke, the Hazelwood School District took the seemingly bold step of acting immediately to close the school. The kids would go straight to virtual learning until this year’s end, when they’d be distributed to other schools.

At first blush, that came across like an uncommonly prompt and decisive action by a school district trying to head off a terrible situation. People could at least breathe a sigh of relief that these kids were removed from danger.

Nothing could be further from capturing the essence of a horror story that will be remembered as by far the worst environmental disaster in the history of St. Louis. Because there’s this: Jana Elementary School may well have been poisoned since the day the school was dedicated on October 1, 1972.

The school sits on the floodplain of Coldwater Creek, which has been contaminated with some of the deadliest radioactive substances ever to exist on the planet. And that contamination in many cases dates back all the way to that day — 50 years ago this month — that Jana Elementary opened.

To be fair, it cannot be said for certain that the creek itself is the source of the waste found at the school. The loathsome federal bureaucrats who customarily minimize the horror of the radioactive waste — perhaps on their way to rotting in hell — may well point out that the new data was revealed by law firms with evil motives such as compensating humans for government-inflicted suffering.

And government-inflicted it has been. Consider some context. The story began in 1942 with the famous Manhattan Project, for which St. Louis’ Mallinckrodt Chemical Works had been selected to execute a top-secret mission: enriching uranium for the world’s first controlled nuclear chain reaction.

For 15 years, the company refined uranium downtown, yielding tons of hazardous waste without a clue of how or where to dispose of it. When space ran out downtown, it would be transported to a site near Lambert Airport, where it was first buried in steel drums but ultimately would land via uncovered dump trucks in two landfills: one on Latty Road, the other at West Lake Landfill in Bridgeton. The government had a name for the waste material. They referred to it as “poisons.”

And perhaps most dreadfully, the poisons (and chemicals intended to extract them) would seep into the banks and waters of beautiful Coldwater Creek.

This is not just any little creek. It’s a picturesque tributary winding through about 15 miles of St. Louis County, spanning communities such as Florissant, Hazelwood, Black Jack, Spanish Lake, St. Ann, Berkeley and Ferguson. It runs past schools, golf courses and soccer fields.

For decades, American-dream suburban homes had been built along its banks. Kids played in it constantly, swimming, skipping rocks and searching for crawdads and more. The creek often flooded, its lethal waters seeping into gardens from which residents thought they were eating healthy vegetables.

Instead, they were poisoned.

In 2008, some of those children of Coldwater Creek celebrated the 20-year class reunion of McCluer North High School. Everything seemed fine. But within just a few short years, they would come face to face with the horror that the contamination had wrought.

One of their classmates had developed a brain tumor and died a few months later, at age 40, leaving behind four children. Another died of uterine cancer at age 40. Two more died from appendix cancer. Still another brain tumor was diagnosed. And one died from a rare case of nonsmoking lung cancer. All in the space of less than two years.

By the time I wrote a 2013 column on this in St. Louis Magazine, the numbers accumulated by some heroic young women (themselves victims) on a Facebook page called “Coldwater Creek: Just the Facts” bore shocking testimony. Here’s just a portion of what I’d learned nine years ago:

“Members of the page have reported more than 2,500 cases of cancer, autoimmune diseases, and birth defects. The data contains more than 100 reports of brain tumors and cancers, more than 50 cases of thyroid cancer, and more than 30 cases of appendix cancer — a stunning number, considering it’s a rare disease affecting fewer than 1,500 people annually.

“There are dozens of cases of leukemia, multiple sclerosis and lymphoma. There’s amyotrophic lateral sclerosis, pancreatic cancer, and more. There are a stunning number of reports of infertility, in addition to the birth-defect cases. There have been three separate cases of conjoined twins (a statistical anomaly if ever there was one). There were three babies born with only one ear, another without either eyeball.”

I can’t imagine how much those numbers have grown since. But this isn’t a story about statistics. It’s about your federal government — across party lines — having wreaked unspeakable suffering on generations of innocent citizens. It’s not hard to imagine Jana alumni being among them.

The people responsible for the Manhattan Project are dead by virtue of old age, unless the poisons (or some other cause) got to them sooner. The villains of the story have been an unending series of federal bureaucrats more concerned about budgets and process than people.

After decades of willful ignorance, the government pretended to get serious about the problem in 1989, when the Department of Energy first reported the presence of radioactive material in and along the creek. It was placed on the “National Priorities List” of the EPA Superfund project that year.

Yet as we learned just a week ago, the material is still destroying the health and lives of people 33 years later. Some priorities list. And for those of us that have attended many of the tearful public hearings on the subject, one clear theme has emerged: The federal bureaucrats cannot bring themselves to care.

For now, the focus needs to be about taking care of the kids of Jana Elementary School. Hopefully there will be a way to clean up the poisons and get them back to school, in person.

In the meantime, it’s worth asking some health questions about the kids who attended Jana over the past 50 years, along with teachers and others who worked at the school. They might be, to borrow my own phrase from 2013, just like the other poisoned children of Coldwater Creek.

Ray Hartmann founded the Riverfront Times in 1977. Contact him at [email protected] or catch him on  Donnybrook at 7 p.m. on Thursdays on the Nine Network and  St. Louis In the Know With Ray Hartmann from 9 to 11 p.m. Monday thru Friday on KTRS (550 AM).