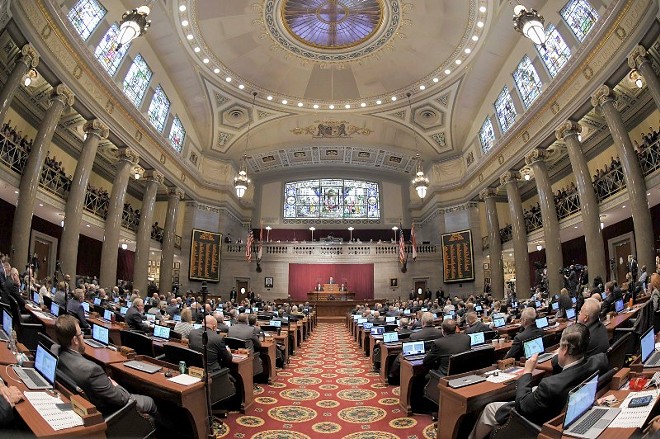 TIM BOMMEL/HOUSE COMMUNICATIONS
In Jefferson City, lawmakers sit on a huge budget surplus that they refuse to spend on services their constituents need.

It doesn't get much simpler than this.

For decades, the state of Missouri has hovered near the bottom nationally in spending on government services for its residents. From education to health care to prisons — pick any category — Missourians get what they pay for: cheap services at a cheap price.

This governing philosophy, such as it is, has been the subject of scant debate. Occasionally members of the nomadic tribe known as the Democratic Party will point out some annoying trivia such as Missouri having the lowest-paid state workforce in America, or the most kids thrown off of Medicaid.

Legislators in the Republican supermajorities haven't bothered to engage on such academic matters. After all, in the past two presidential elections, it was their side that voted overwhelmingly for a man who coined the phrase, "I love the poorly educated."

But an unpleasant turn of events took place for those Republican politicians in the past year: An avalanche of new funding rained down upon states like Missouri in pandemic relief and, more recently, President Joe Biden's Bipartisan Infrastructure Law. Neither "Biden" nor "bipartisan" plays well with the Republican base.

Adding fiscal insult to injury, the voters of Missouri and the state Supreme Court rammed Medicaid expansion down legislators' throats. This caused hundreds of millions in new federal health-care money to flow into the state, a fiscal boon, or as Missouri's conservative Republicans call it, the Great Obamacare Tragedy of 2022.

Republican politicians find themselves in an awkward position. The state government sits on an unprecedented surplus of billions of dollars that cannot be minimized or concealed. That fact alone shines an unwelcome spotlight on lawmakers' malfeasance in funding the basic needs of the people they were elected to serve.

The traditional mantra — "we simply cannot afford these social programs" — is refuted by the size of the surpluses. A substantial portion of elected Republican politicians face making a public choice between funding social spending they despise or admitting that they don't care.

As if that weren't miserable enough, they're in an election year following a redistricting. The resulting primary contests make voting for anything that sounds progressive a dangerous thing for Republicans and even conservative Democrats.

Look no further than the House Budget Committee to see how this plays out. The chairman is Representative Cody Smith (R-District 163) of Carthage (Missouri, not the Phoenician empire) — in whom vast power is vested by obscure internal procedure. Smith's governing philosophy — more like a Pavlovian response — is best portrayed by profundities such as "Medicaid expansion is wrong for Missouri."

Initially, Smith's target was that crazy radical-socialist Republican Governor Mike Parson who had proposed a record $47.3 billion state budget. Parson surprised lots of people by making a good-faith effort to capitalize on the state's enormous budget surplus. (Too bad he wasn't so reasonable about the pandemic.)

Parson's budget stopped short of reversing all of the funding losses suffered by public education — including higher education — in recent decades. But as one stunning example, Parson proposed a $15 minimum wage for all state employees that would end Missouri's dubious distinction as having the lowest-paid state workforce in the nation.

Smith's response to that, as reported in the Kansas City Star, was a beauty:

"I don't think everybody should go to $15 an hour just because we can. There are state jobs that take a minimal amount of skill and experience."

One of those, apparently, is that of the House Budget Committee chairman. Smith dragged his feet so egregiously and nitpicked the budget of his own party's governor so annoyingly that even Republican Senate Majority Leader Caleb Rowden (R-District 19) called it "fairly irresponsible," according to St. Louis Public Radio.

Rowden didn't even pretend that the two Republican supermajorities of the legislature were friendly.

"If they're going to give it to us, three weeks later than they were supposed to, and in a year where obviously we've had time crunches for a couple of other things, the Senate usually wins the budget process. I don't have any desire to lose this year," Rowden said.

In recent years, the pattern of Smith's committee fumbling around and then having the Senate call most of the shots on the budget — with the help of Democrats in the conference committee process — has resulted in less draconian results than Smith might have liked.

But let's be clear: Even the most reasonable Republicans, by Missouri standards, continue to govern with an anti-government disposition. It is not an accident that Missouri is ranked 49th among the 50 states in health-care spending by the Kaiser Family Foundation. It is not an accident that it's dead last in state government support of public education. And that list is about as long as the number of major categories of state spending.

Consider the recent words of a state senator who, as best I can tell, is one of the more respected members of the body across the aisle. He is Senator Lincoln Hough (R-District 30) of Springfield, and he had this to say about the state budget surpluses:

"I don't believe people pay taxes so that the government can put this money in the bank. I believe most people would probably agree that some taxes are necessary and services that are rendered by the state are necessary."

Hough goes on to call for returning something like $3 billion to individual residents in the form of $500 tax credits or the like. That's a lame idea in a state that remains so deficient in delivering necessary services. But at least it's debatable, unlike the knee-jerk anti-government nonsense.

Still, Hough's words were revealing: "Most people would probably agree that some taxes are necessary?" (Emphasis added.) Now there's a ringing endorsement, perched on eggshells.

On the Democratic side, Representative Peter Merideth (D-District 80) of St. Louis is the undisputed champion on this subject and serves as the ranking minority member of Smith's budget committee. Merideth diplomatically says the current budget is the best he has seen in six years on the job but describes the overall work as "unbalanced."

"We are leaving $1.8 billion in general revenue of recurring money unspent and $5 billion or more in one-time money unspent," he says.

Oh that. And as Merideth notes, Parson's respectable budget still falls short of what it could be. For example, the governor's 5.3 percent increase for higher education seems like a good thing until you consider that Missouri has cut that area of its budget by 15 percent — more than any other state — in the past two decades, Merideth says.

"Why not restore it to where it was?" he asks.

Now that's a good question. But I don't think turning to people who don't believe in government is going to provide much of an answer. 