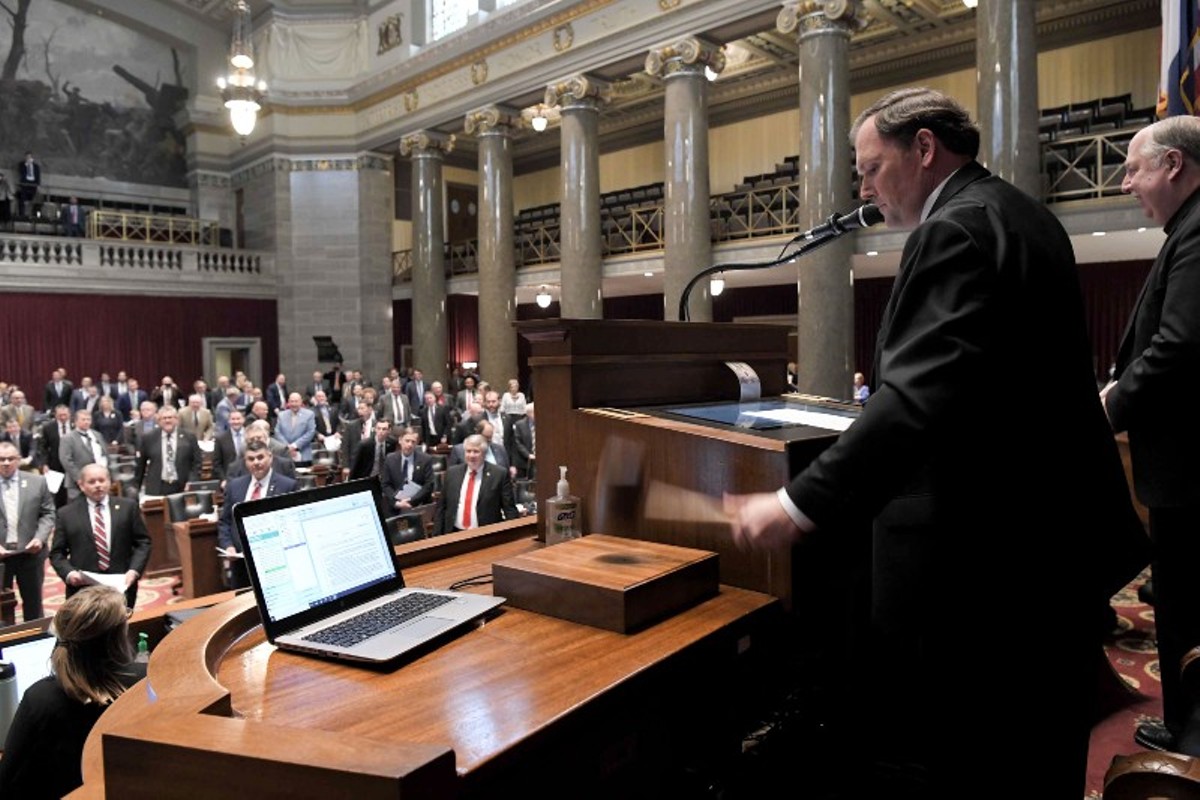 Convened on the very day that Donald Trump tried to overthrow American democracy, the recently concluded session of the Missouri General Assembly might have evolved as a paean to the wannabe oligarch.

Missouri’s Republican Party proved notable more for fission than fiction by session’s end. Despite their 70-percent-plus stranglehold in both chambers, GOP legislators displayed an astounding lack of unity and fealty to Trump’s central disorganizing principles.

Of course there were some awful top-line results from the session. The Republicans’ scandalous refusal to follow the state constitution and expand Medicaid coverage was and is unconscionable. So was the customary harlotry to gun zealots. And an attack on public education via private-school vouchers. And so on.

But for fans of the false narrative that Trump had the 2020 election stolen from him, the 2021 session of the General Assembly must seem a great betrayal.

Trump’s essential grievance checklist was left with many boxes empty considering Missouri is a state he carried by more than fifteen percentage points over President Joe Biden.

Where’s our new voter-suppression laws? Why didn’t you make it legal to mow down Black protesters? Why haven’t we outlawed trans kids’ surgery? Where’s all our anti-immigrant stuff? How about something for the QAnon freaks?

Wingnuts cannot be happy. Republicans could have easily delivered the worst of the worst. Not only did they fail in that mission, but they permitted quite a few decent and normal bills to get to the desk of Governor Mike Parson. That’s not the way the national bosses drew up the plays.

To be clear, 2021 is an odd-numbered year, meaning there’s no election looming in November. Years like this are traditionally the only ones in which normalcy clings to a prayer in Missouri. The reddest of red meat is reserved for even-numbered years.

But a band of feisty Democrats pulled off far more success than most of us ever expected. They were helped by some quietly rational friends in high places in the Republican caucus — often in secret — but they also played a paltry hand of political cards brilliantly. It didn’t hurt that Republicans were preoccupied with internal battles, providing some strange-bedfellow coalitions that Democrats exploited adroitly.

That said, it ain’t till it’s over. No one can be sure what Parson is thinking — or if he’s thinking — when bills arrive at his desk. So there’s always the prospect of vetoes. And a special session is a certainty to complete the work a functional and competent legislature would have finished by its May 14 closing bell. One never knows to where a special session goes.

But even more importantly, a landmark court battle over Medicaid expansion is inevitable, presumably to be waged in short order at the Missouri Supreme Court. Perhaps Missourians can travel across the river to Illinois to bet on the outcome of Democracy v. Douchebags.

While waiting for all that to unfold, here’s one person’s assessment of the legislative session:

Go ahead and celebrate, just like with those legislative victories, large and small, that weren’t listed in the pundits’ pre-season predictions. Unless Parson channels Trump and says “nyet,” the state will actually raise a tax without a ballot referendum since 1993, the first year of the late Governor Mel Carnahan’s tenure in office. That would be a phased-in — albeit modest — hike in the state’s gas tax for direly needed repairs to roads and bridges throughout the state. Combined with the online sales tax increase, that’s officially two tax increases in one year from state politicians who view revenues more hostilely than infectious diseases.

While it may seem a baby step, Missouri actually enacted criminal-justice reform by banning chokeholds statewide and establishing a database requiring the tracking and reporting of incidents of violence involving police. Yes, there were offsets with a list of new “rights” for bad cops to satiate those outraged by the notion of any reform of policing, but the very notion of any progress for any victims of police violence in Missouri is noteworthy.

There were lots of small victories — some by artful deployment of amendments — that frankly don’t sound like the Missouri of recent decades. Women in both prisons and jails will have new access to menstrual products. Pharmacists will be allowed to dispense medication without a prescription to a customer after potential exposure to HIV, often critical to preventing infection. The state finally moved to crack down on abuses at faith-based schools and curtail the awful practice of seclusion and restraints in all schools.

The Republicans’ ongoing assault on the poor raged on. Along with refusing to follow the state constitution and expanding Medicaid coverage to some 275,000 citizens, GOP legislators failed for the first time in decades to extend the Federal Reimbursement Allowance — a tax on hospitals and other providers that would blow a multi-billion-dollar hole in the state budget. They decided it was a fine opportunity for a little ad hoc demagoguery against the evil of birth control. Presumably this will get fixed in a special session, but at what cost to humanity remains to be seen.

The legislature also failed to reign in Parson’s dark instincts to torment people who were overpaid — because of government error, not fraud — in unemployment payments. There’s little upside to the state financially, just that nice cold feeling — where some people have a heart — that little people weren’t getting a break they didn’t earn. In the same vein, the legislators were fine to allow Parson to reject federal unemployment benefits, making a bold political stand that will almost undoubtedly wrack the state economy. To be fair, this one didn’t require independent thought: It’s part of a red-state fad.

The same can be said for two monstrous legislative efforts. One, the so-called Second Amendment Protection Act (SAPA), makes a bold ’21 statement — as in 1821, not 2021 — that says no federal gun laws can apply in these here parts. And that any police department that tries to enforce such alien laws will be defunded — uh, sued heavily — should they try to take away a man’s gun.

Then there’s long-awaited enactment of a private-school voucher program, a two-for-one assault on public education and the First Amendment separation of church and state. In normal times, that would have been a gigantic headline. Not in this era, when people who believe in democracy are actually celebrating that the General Assembly didn’t act overtly to end it.

Somehow, the Republicans didn’t get around to making voter suppression a centerpiece of their agenda, as they have in many other states. Including ones in which Trump won easily but still would like air cover for his noxious lies about having the presidency stolen from him.

You see, the session of the General Assembly that began January 6 might seem awful to normal people. But it’s Dear Leader Trump who’s especially not smiling.