Hartmann: St. Louis Is a Town Full of 'John Does'

Bribery indictments are a spin-off of a warped political culture 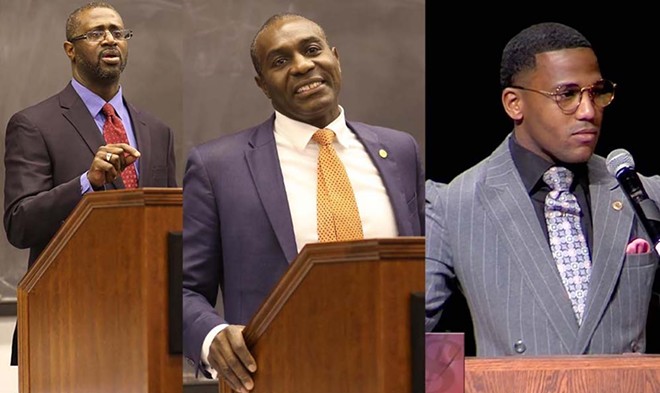 The bombshell indictments that rocked St. Louis politics last week drew indignation from all quarters. The message was clear: This is not how we do our bribery around here.

Aldermanic President Lewis Reed and Aldermen Jeffrey Boyd and John Collins-Muhammad face federal bribery-related charges for helping the owner of a small business get tax breaks from the city, among other nefarious activities. That sort of thing is also known in city political circles as “Thursday.”

Boyd and Collins-Muhammad have resigned, and Reed would seem likely to follow. They have only themselves to blame and will get what they get, most likely prison time. They will also suffer another terrible fate for politicians: irrelevance.

But “John Doe” still matters. Not personally, but as an archetype for politics under the Arch.

Doe was the star of the indictments. He owns some gas stations and convenience stores in the city. He wanted tax breaks and corners cut by city government, just like a whole lot of businesses do, large and small.

But Doe was unusual because he had been arrested by the feds in a 2017 sting that uncovered a cigarette and marijuana trafficking scheme. Perhaps he told the feds of participating in crimes with some city politicians. It appears that wearing a wire to help reel in the bigger fish improved Doe’s situation.

The indictments presented by Assistant U.S. Attorney Hal Goldsmith made for some eye-popping reading. They recounted all sorts of tawdry cash exchanges in which Doe was allegedly buying favors from one or more of the defendants.

Even worse were the transcripts of the wiretapped discussions, featuring cringeworthy references to Collins-Muhammad’s “throw him something … 10 is good” and “whatever you give me we have a relationship” — and Reed’s “oh man, that’s perfect” after $2,000 cash was counted out for him. Or, slightly off topic, Boyd’s reference to how he had been “working like a Hebrew slave” before counseling Doe to inflate the construction costs of a project, fraudulently, from $125,000 to $325,000 for the purpose of qualifying for tax abatement.

My first reaction to reading this indictment was to think, “Wow, how stupid were these guys to throw away their lives over such small change? Cash from ATMs? Car-repair bills? Really?” A number of friends and colleagues had similar takes.

Then I had a second thought: Are we suggesting that these crimes would have been respectable if more money had been on the table? A whole lot of politicians wouldn’t stoop to accepting such small change because they benefit so much more — quite acceptably — by monetizing their public service within the boundaries of the law.

To be clear, nothing herein is exculpatory, mitigating or otherwise apologetic for Reed, Boyd and Collins-Muhammad. If they broke the law, they pay the price. And yes, there’s a big difference between breaking laws and obtaining the same benefits by staying within those laws.

But before the political class in St. Louis gets all haughty and irate about some small-time graft, it might be helpful to pay more attention to John Doe. He didn’t even get in trouble for offering to buy favors from politicians with cash. In fact, it seems to have gotten him out of trouble.

Obviously, that’s not normally the case. But here’s something normal to ponder: What this guy was trying to do was — at its core — the rule, not the exception, in today’s political system.

John Doe was a moneyed interest who wanted something from the political class, and he was willing to give something of value in return for it. Grateful recipients were happy to oblige.

That, friends, is the essence of our system today.

St. Louis is teeming with John Does, buyers of tax credits and all manner of favoritism from politicians, of which corporate welfare is just one small part. There is no shortage of sellers among public officials, though most are careful to stay within the legal lines.

Most of the Does wear expensive clothing and don’t use street language. Folks sitting in paneled offices mostly refrain from phrases such as “throw them something,” as was seen in the indictment.

But whether the transaction takes place in a country-club enclave or at an ATM, it’s the same concept: You do for me, I do for you. And that’s not so great when it impacts the actions of government.

Had Doe written a campaign check to the same politicians — even for exponentially more money — with the direct expectation of a favor to follow, there would be no story here. That’s just the campaign-finance system.

Folks, the place is crawling with John Does. Many are represented by silk-stocking lawyers and bankers and financial advisers handsomely compensated to do the same thing John Doe did, but with all the i’s dotted and all the t’s crossed.

Indeed, there’s an entire cottage industry that has been spawned for this very purpose of connecting John Does and public officials. Or maybe public officials and John Does. And it’s hardly confined to the city.

Consultants, glad-handers and hangers-on flicker around John Does like moths around a light. There’s an entire ecosystem connecting moneyed interests who want something from government at all levels to the public servants who can get them what they want. Across party lines, by the way.

No one finds this more offensive than those in the media. Now, I don’t blame my colleagues for their disgust at it all: It’s well placed. But shouldn’t it count that the bosses who sign their paychecks themselves engage in sleazy pay-for-play advertising activities that make a mockery of journalistic standards? Or that some prominent members of the political ecosystem are the very ones who can get their stories assigned or killed?

And as to that umbrage over the pettiness of some minor politician getting his used car fixed for free, answer this: Would you feel better if the favor was something less untoward? Maybe a nice weekend getaway at some posh condo, or luxury seats at a big game for the Cards or Blues, or a hot event at the Fox Theatre — maybe with some nice autographs and memorabilia for the kids?

Perks like that flow like rivers — not for every politician, but lots of them. Legalized bribery is alive and well in this region. And it’s not any good.

This is not unique to St. Louis. But it’s especially problematic in a place that judges you by where you went to high school, where having inherited generational wealth is regarded as a great human virtue.

In a place like this, it’s worth being especially sensitive to the stranglehold money has over the political system. Catching some small-time political graft is the tip of a very large iceberg.

John Doe didn’t just flash some cash. He held up a mirror to St. Louis.