Hartmann: When It Comes to Murdered Kids, Vicky Hartzler Sticks to Her Guns 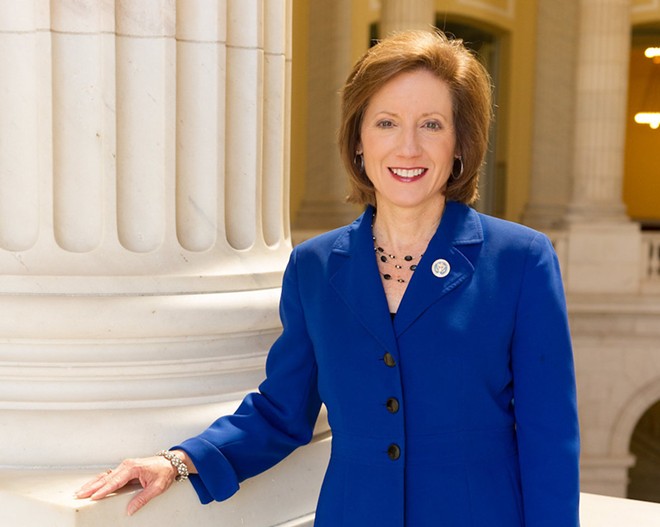 U.S. Representative Vicky Hartzler (R-Harrisonville) has a fair chance of becoming Missouri's next U.S. senator. So, it's worth paying attention to her public statement about innocent schoolchildren being slaughtered by a deranged man and his assault-style rifle.

"As a former public school teacher and a mother, my heart goes out to the families of those innocent young lives taken much too soon. I can hardly imagine the grief and sorrow they are experiencing, and I pray no parents, brothers or sisters will have to bear this burden in the future. We must take on the reckless excess of violence with actions that will truly help protect our children and grandchildren."

Hartzler quickly added, "Banning guns isn't the answer to preventing violence any more than banning cars would be the answer to preventing people from being killed in car accidents. ... Unproven and emotionally driven gun control legislation is a common and simplistic response to gun-related tragedies, but such lawmaking usually fails to address the underlying problem."

But enough about what Hartzler had to say about the mass murder of 20 children and six adults on December 14, 2012, at Sandy Hook Elementary in Newtown, Connecticut. Hartzler expressed these sentiments less than seven weeks after the tragedy in a commentary she wrote for Politico.

Fast-forward to the carnage at Robb Elementary School in Uvalde, Texas, where 19 children and two adults had their lives taken by a deranged man and his assault-style rifle. This time Hartzler's response was reported by KSDK, but her previous empty message echoed eerily.

If Hartzler hadn't written the first article herself, she might have had a case for plagiarism. This is what she said this time:

"I was sick for the parents and the first responders, the entire town and our nation. As a former teacher myself, and a mother, I just can't imagine what these families are going through, what the school is going through. And it's just another example of a loss of lives and potential that was unnecessary. We need to look at this and see if there's anything that can be done to prevent these things from happening again."

The indistinguishable nature of the statements speaks for itself. This time, however, Hartzler did remove the words "public school" in harkening back to her teaching past, presumably in deference to her party's ever-increasing disdain for public education.

But the similarity doesn't end there.

In the aftermath of the Sandy Hook massacre, Hartzler faithfully regurgitated Republican talking points as a voice of faux calm and reason. She sternly warned against any knee-jerk response that would address the scourge of military-combat weaponry in the hands of citizens.

"There will be plenty of time in the weeks and months ahead to address issues of how best to protect our children," Hartzler said nearly 10 years ago — before the murdered innocents of Uvalde were born.

And today? That message hasn't changed a bit. Hartzler said it's "too early to pass any gun-control measures," KSDK reported. "She said she opposes expanding background checks or raising the legal age to buy a firearm." It also reported that Hartzler "said she backs a plan to arm guards in schools." Whatever that might be.

Hartzler, it turns out, isn't all that great at deductive reasoning. Consider a sad case closer to home.

On August 19, 2021, Steve Walsh, Hartzler's former press secretary, died from COVID-19. Walsh was unvaccinated and had poked fun at others who were promoting vaccines. Still, Walsh had been well respected, and his untimely passing might have been a moment for coming together regarding the pandemic.

Not so much. Less than five months after the preventable death of her own personal friend and aide, Hartzler's congressional website proclaimed, "Hartzler Introduces Legislation to End Federal Vaccine Mandates for Employees."

So maybe it's unkind to suggest that Hartzler is one of those politicians who puts her selfish interests above the greater good when it comes to issues in the town square. Maybe she just doesn't "get" stuff.

That would be the kindest explanation for why politicians like Hartzler cannot act with decency in the wake of unspeakable tragedy. A more cynical view is that she might be one of the Republicans in the pocket of the gun lobby, but that's what elections are for, and the nation shouldn't wait a second — much less five-plus months — to react to Uvalde.

An obvious solution is right in front of us: Ban assault weapons.

The nation did it in 1994. The results were crystal clear: During the decade that followed, America experienced a sharp decline in gun-perpetrated massacres, as laid out in a 2016 Washington Post piece citing the work of professor and author Louis Klarevas in his book Rampage Nation.

Klarevas defined a massacre as six or more people shot and killed. He described the results as "staggering," as documented so clearly by the numbers.

And there was this: Klarevas says that the key provision of the assault-weapons bill was a ban on high-capacity magazines capable of holding more than 10 rounds. "We have found that when large-capacity mags are regulated, you get drastic drops in both the incidence of gun massacres and the fatality rate of gun massacres."

As reported at St. Louis Public Radio, NPR assembled this very partial litany of massacres at the hands of an assault-style rifle in the past decade, prior to the Uvalde tragedy:

Dec. 14, 2012: The shooting at Sandy Hook Elementary School in Connecticut where 26 people were murdered and the gunman committed suicide. (The gunman also killed his mother before going to Sandy Hook.)

These facts are self-evident. Obviously, no one law is going to prevent any particular tragedy, which Republicans seem to consider their "aha" argument against sane gun control.

That's pure illogic. No other proposal faces that burden. Murder laws don't prevent any particular murder from happening. Does that mean murder laws are useless? Of course not.

Just like a reasonable reading of the Second Amendment would suggest that it protects firearm ownership without entitling every civilian to own whatever weapons of war they please. That's just common sense.

And so is this: If the Uvalde murderer had been an illegal immigrant who'd crossed over from the Mexican border just 54 miles away, rest assured Hartzler and company wouldn't have tolerated anyone arguing it's "too early" to respond to the crime with swift immigration-related action.

It isn't too early to ban assault weapons again. But if civilian Americans keeps getting more militarized, it may soon be too late.