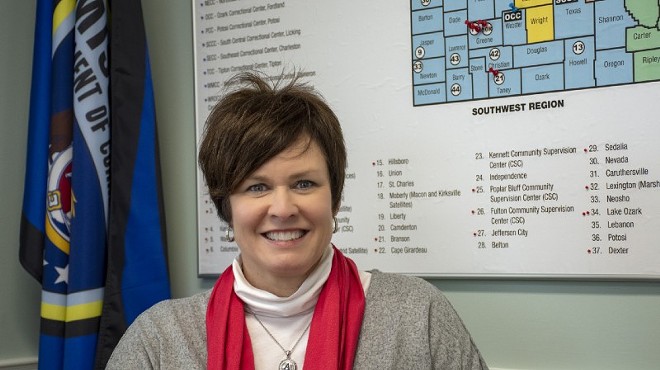 MISSOURI DEPARTMENT OF CORRECTIONS
Anne Precythe became director of the Missouri Department of Corrections in 2017.


This story was sponsored in part by a Fund for Investigative Journalism grant.

The plaintiff in the case was originally on probation in Virginia when she moved to North Carolina to be closer to her family. Maud Ingram became her probation officer and made it clear that he would revoke her probation, sending her back to jail, if she didn’t have sex with him.

Three years prior, the lawsuit alleges, Ingram had blackmailed another female under his supervision in a similar manner and instead of being disciplined was transferred and promoted. Ingram’s pattern of behavior continued until the plaintiff in this current civil case approached a lawyer for help. The lawyer contacted law enforcement, and in 2015 the North Carolina State Bureau of Investigation sent the plaintiff to a meeting with Ingram wearing a wire. Ingram was recorded instructing the plaintiff to pull her dress up. “Oh, I can’t see that pussy like that come on here,” Ingram was recorded saying right before agents entered the room and arrested him. He pleaded guilty to four counts of rape in 2017 and was sentenced to eighteen years. The current civil suit was filed a year later.

“What happened to Ms. Roberts at the hands of her probation officer is not in question," said Meredith Hubbard, the attorney representing the plaintiff in the current civil suit, which is making its way through federal court in North Carolina. "It is undisputed that he took advantage of her and forced her to do horrific things. The only thing at issue in this lawsuit is whether his supervisors can be held accountable for his actions."

Ingram is one of the defendants in the suit. The other nine defendants are the individuals charged with supervising him, ranging from his direct boss all the way up to the person in charge of the entire DPS.

"Obviously, the probation officer at the bottom of this organizational chain directly committed these acts," Hubbard said. "But it was the ones up above who we would argue knew or should have known that he might be prone to do something like this. He'd been investigated for similar behavior before."

As the director of Community Corrections for the North Carolina DPS, Precythe was in charge of an agency whose mission, according to its website, is to provide “meaningful supervision to offenders on probation, parole or post-release supervision” and “reach an equal balance of control and treatment for offenders that will positively affect their behavior and lifestyle patterns.”

The suit alleges that Ingram’s bosses were “grossly negligent” and “reckless” in their hiring and supervision of Ingram. At the time that the rapes occurred, the suit alleges, he was on a “poor performance review plan,” which meant that his cases were to be reviewed every week. The suit claims, “Reasonable supervision would have revealed a history of abuse, misconduct, and unfitness to serve as a probation officer.”

At the time of Ingram’s misconduct, Precythe was in charge of 2,500 employees, including Ingram. A filing made by the defense states that, “As a result of the size of Community Corrections and her areas of responsibility, she relied heavily on her assistants and the chain of command to manage day-to-day matters and to supervise officers in implementing and enforcing policies…Before this matter became a full-scale investigation Precythe had not heard of Maud Ingram” or the plaintiff.

The defense counsel in the North Carolina civil suit has filed a motion for summary judgement, arguing that the case should be dismissed as a matter of law and not go to a jury. The plaintiff’s attorneys have responded, and both parties are waiting for the judge to rule.

The MODOC did not want to comment on pending litigation.

Missouri’s prison system had its own problems during a raucous beginning to 2021. A riot occurred on New Year's Eve at Maryville Treatment Center, a minimum security prison in the northwest part of the state. Between 20 and 25 inmates destroyed a housing unit and administration office after becoming intoxicated.

Injuries to staff and offenders were minimal but according to one individual familiar with the incident, property damage was extensive. Rioters broke windows, toilets and sinks, pulled security cameras from walls and sprayed fire extinguishers in the mailroom and other offices.

Ryan Krull is a freelance journalist and assistant teaching professor in the department of communication and media at the University of Missouri-St. Louis.