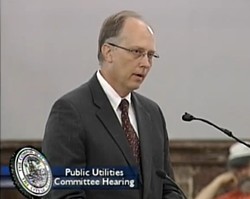 Last week, the Board of Aldermen's Public Utilities Committee met for four hours on a single agenda item: A pending contract between the St. Louis Water Division and the world's largest water services company, Veolia.

Committee chair and 2nd Ward Alderwoman Dionne Flowers kicked off the first of two such public forums with a qualifier for the audience.

"Just for clarification the Board of Alderman has no authority over the selection of this contract," she said. "This would not even be before us today if it was not an issue with the mayoral race."

Controversy over the contract began after Daily RFT broke news of the impending deal in December 2012. Sources within the water department were concerned that if the city hired Veolia to consult with the city on cost-cutting, the French multinational company would advise severe cutbacks and job losses. Since then, a coalition of environmentalists, social justice advocates, and labor interests have come together to oppose the deal on a raft of concerns, ranging from Veolia's involvement in Palestine to its failed dealings in other American cities. The group Dump Veolia spells its position out on its website here. Mayor Francis Slay supports the deal and repeats that Veolia's involvement will mean neither layoffs, privatization of the utility, nor a decline in St. Louis's water quality.

The debate came to a head in the 2013 mayoral election, when Aldermanic President Lewis Reed, running against Slay, promised to strike the deal down if he were to take office. Slay placed the contract approval on an indefinite hold back in March, then was re-elected in April. For more background on the interests involved, read our feature story, "Hosed," here.

Slay promised that nothing would move forward with the contract until the public has a chance to be heard -- the venue chosen was the Public Utilities Committee, though as Flowers said in her opening remarks, the aldermen have no direct say in the deal's fate. The contract must be approved by the Board of Estimate and Apportionment which is made up of Slay, Reed and City Comptroller Darlene Green. The comptroller seems to hold the tie-breaking vote.

Maggie Crane, a spokeswoman with Slay's office, tells Daily RFT an impending rate hike of six percent is the pressing need for Veolia's contract to be approved. She cites a study done by Black & Veatch, an outside consulting company, which is recommending a three percent rate increase for two consecutive years no later than 2016. Read the full Black & Veatch report here (We've also embedded it in the final page of this post).

The evening before last week's hearing, Slay's chief of staff Jeff Rainford sent out a few pointed tweets on the matter:

Study says City water rates need to go up by 6% It's what we feared. It's why we need ideas to hold down rates and maintain quality.

Other two members of E and A need to let the mayor do his job to hold down water rates. If not, they will be accountable for the increases.

St. Louis TV was on hand to document last week's very long proceedings. Check them out after the jump -- Water Commissioner Curt Skouby, Reed, Eddie Roth from Slay's office and Veolia executives testified. The public is being encouraged to attend the second of these meetings tomorrow, July 2, from 6 until 8 p.m.