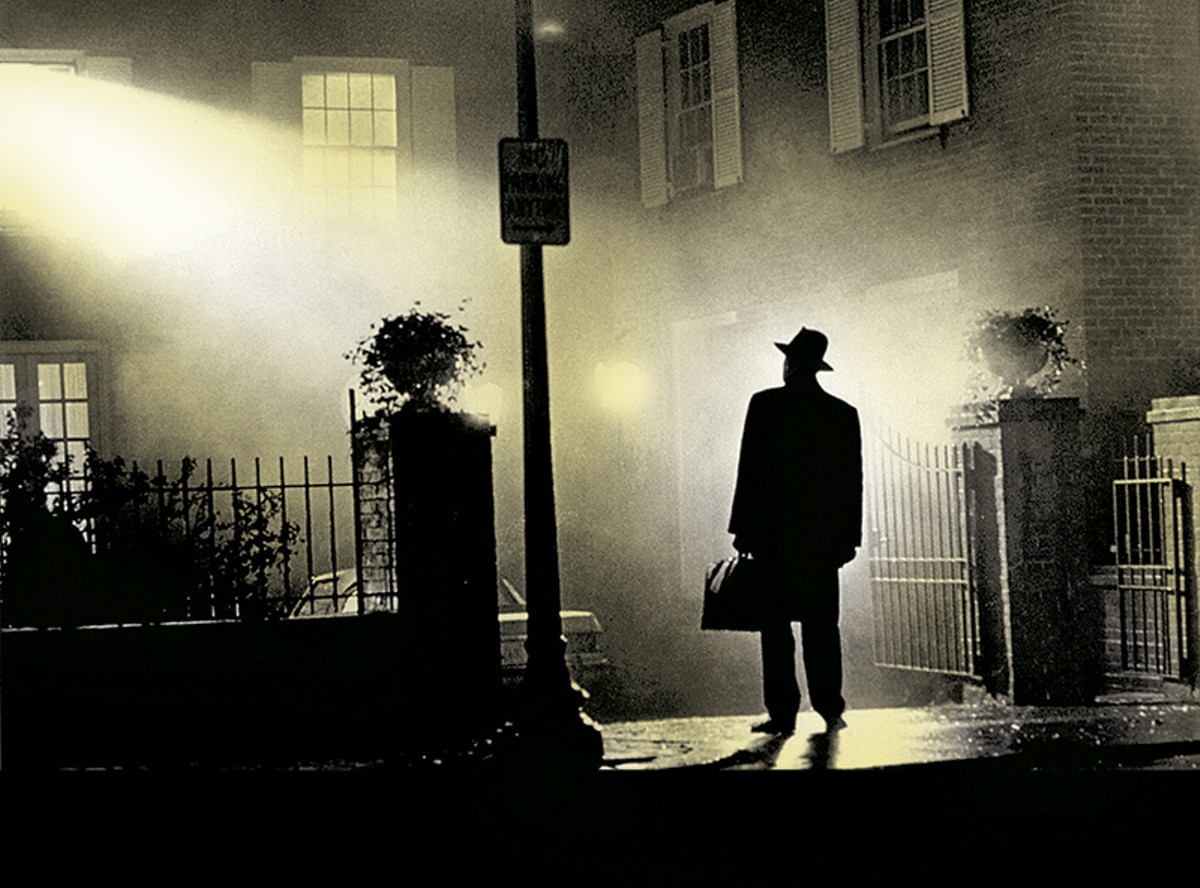 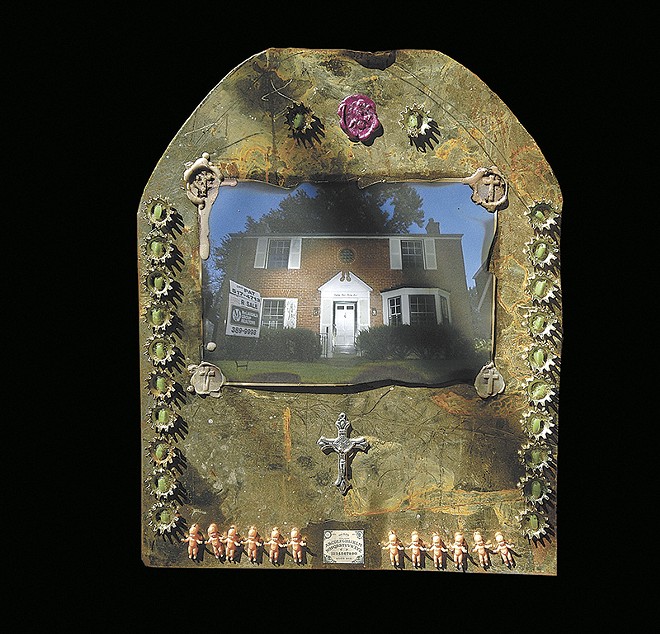 RFT Archives/ Oct. 26, 2005
Priests report arriving at the house on March 9, 1949, to witness the boy's bed shaking uncontrollably. At the mention of the scriptures, the boy screamed out in pain. Scrapes and welts — some forming letters and words — rose up inexplicably on his skin. A bottle of holy water flew through the air.

For two weeks the priests waged night-long battles with the demon inside the lone lit bedroom on Roanoke Drive.

That these scenes in the home are not addressed in the retelling of the exorcism is not surprising, given the extraordinary care the Jesuits took to conceal the identity of the possessed boy.

In fact, few of the St. Louis priests involved in the exorcism ever spoke of it. Father William Bowdern, who carried out the majority of the exorcism rituals, died in 1983 at the age of 85, never having disclosed what he knew of the case.

This past March, Father Walter Halloran, the last surviving Jesuit to take part in the exorcisms, died at 83.

Halloran was a 27-year-old history student at SLU when Bowdern recruited him for the exorcism. A handsome, athletic man who excelled in both football and track, Halloran provided much of the needed brawn, holding the flailing child while the priests read to him the rites of exorcism. During one episode the boy broke free of Halloran's grasp and punched him in the face, breaking his nose.

Unlike nearly all the other Jesuits with privileged information of the exorcism, Halloran shared what he knew of the case but always stopped short of saying anything that might identify the child. His most detailed recollections were told more than a decade ago to Washington, D.C.-based author Thomas B. Allen, who in 1993 published the book Possessed: The True Story of an Exorcism.

The book relied heavily on Halloran's account of the exorcism and, most important, an unedited copy of the exorcism diary he provided. The result is an enthralling day-by-day chronicle of the possession, beginning on January 15, 1949, when the boy's family first heard odd noises in their suburban D.C. abode, and ending April 19, when Bowdern is said to have finally cast Satan from the boy.

In one account, Allen describes the night the exorcism began in the Bel-Nor home's second-floor bedroom.

"Something now rippled on Robbie's right leg," writes Allen, using a pseudonym to identify the boy. "As Bowdern again commanded the demon to identify himself, red welts formed an image on the leg. It was, the witnesses later said, an image of the Devil."

The true identity of the boy and his family has never before been publicized. A dozen years following the release of his book, Allen still declines to disclose the name made available to him in Halloran's unedited diary.

"Soon after the book came out, a television show offered me $15,000 if I'd identify the kid," says Allen when contacted by phone at his home in Bethesda, Maryland. "I passed on it. During the research for my book I sent the kid — then in his mid- to late 50s — two letters to the address where I believed he lived. I never heard back from him, and I have to respect his privacy."

In the book, Allen identifies the St. Louis home as belonging to the boy's paternal uncle and depicts it simply as "a two-story brick house set back behind a front-yard lawn on a quiet street in a suburb a few miles northwest of St. Louis."

How, then, can we be sure the house on Roanoke was indeed the site of the exorcism? The answer comes circuitously, by way of Allen's report. While the author provides scant detail of the house, he does provide the address of the residence in Mt. Rainier, Maryland (just north of Washington, D.C.), where the boy is said to have lived at the time of the possession. That home, listed as 3210 Bunker Hill Road, received far greater notoriety than its counterpart in St. Louis.

Allen writes that the family moved away a short time after the exorcism. The property sat vacant for years. The home was known by locals as the "Devil's House"; teenagers dared each other to enter. Vagrants squatted in it, often setting parts of the house ablaze with their cooking fires.

By the early 1960s, the ramshackle structure — believed by many to be cursed — became such a nuisance that the local fire department used it as a training exercise, systematically burning the house room by room. Today all that's left is an empty lot, but that doesn't stop thrill-seekers from congregating on the very spot where they believe the Devil possessed a little boy.

Sadly for the thrill-seekers, the property is most likely not the true site of the possession. Prompted in part by Allen's book, Washington, D.C., writer Mark Opsasnick began researching the owners of the property on Bunker Hill Road. He discovered that the couple who lived there in 1949 did not have children. Working with clues gathered from Allen's book as well as dozens of news articles telling the "real-life" story behind The Exorcist, Opsasnick determined the boy grew up in nearby Cottage City, Maryland.

In 1998 Opsasnick published his findings in Strange Magazine, a publication dedicated to the unearthly and paranormal. In what is undoubtedly the most comprehensive investigation into the boy's identity, Opsasnick chronicles how his research led him to a home at 3807 40th Avenue in Cottage City. Dozens of interviews with people who knew the family living there at the time confirmed the author's hunch that the Cottage City address was in fact home to a family whose child became "sick" in the winter of 1949 and went to St. Louis for treatment.

Although Opsasnick never identifies the child or the family by name (he uses the pseudonym "John Doe" throughout the article), he leaves valuable clues for anyone wanting to out the family, including which census books, municipal directories and libraries he used to verify the family's name and address.

When reached by phone earlier this month, the periodicals clerk at the Hyattsville Library in suburban Washington, D.C., reported that the 1949 directory Opsasnick cited in his article had been stolen but proudly noted the library did have the same directory for 1954.

In his article Opsasnick writes that Maryland land records show the family lived at the same Cottage City address from the years 1939 to 1958, meaning the 1954 address should have the same name for the family living at the address in 1949. That name: Hunkeler. Mr. Edwin E. Hunkeler and his wife, Odell.

The same last name is listed for the home on Roanoke Drive, according to the St. Louis County municipal directory for 1949. Leonard C. Hunkeler — the paternal uncle of the possessed boy — and his wife, Doris, occupied the home from 1942 (the year the house was built) until sometime in the early 1950s.

As to the identity of the possessed boy: His last name was most certainly that of his father, Hunkeler. No verifiable media report has ever given his full name (or, for that matter, the last name of Hunkeler), but at least two Web sites, one claiming to have obtained the unedited exorcism diary and another that ostensibly retraced the clues given in Opsasnick's article, give the name as Ronald Hunkeler.