Her Parents Were Stuck in Afghanistan, So She Took the Journey of a Lifetime

Latifa Sidiqi left home in St. Louis to rescue her parents from the Taliban's rule 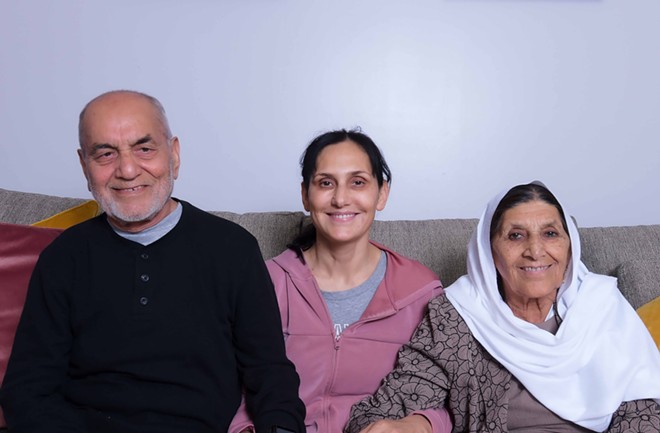 At a regular family dinner, on a normal Wednesday evening, Latifa Sidiqi told her kids that she was going to fly to Afghanistan.

It was May 2022, nearly a year after the Taliban takeover. But Latifa, 51, said she needed to go back to the country she’d left nearly two decades before, pick up her elderly parents and bring them to St. Louis.

Her kids, all grown, thought it was a joke.

“Nobody,” her 32-year-old daughter Moji Sidiqi says, “took her seriously.”

Why would their mother, safe in St. Louis, travel to a country at war? Could she even book a flight to Afghanistan? And what would she do even if she could get there?

But it wasn’t a joke. Latifa already had plans to leave — plans that would lead to a journey of exceptional danger. For months, Latifa did the unimaginable after willingly traveling thousands of miles into a situation that most people with ties to America have struggled desperately to escape.

Latifa first left Afghanistan in 1995 after the Taliban arrived. She immigrated to Moscow before being resettled in St. Louis four years later. She has stayed in St. Louis ever since, running a small business, selling real estate and raising her three kids.

Her parents, though, stayed back in Afghanistan, where her father served as a federal judge. Latifa visited multiple times a year, checking up on her parents and siblings. But when the Taliban overtook the Afghan government in 2021, everyone left in a hurry. Latifa’s siblings, family friends, neighbors –– everyone left.

Her parents, in old age, couldn’t run away. They stayed in Afghanistan for nearly a year, all alone. Before the war, her parents were known for never locking their door, Latifa says. Grandkids, daughters, friends streamed in and out. But after the Taliban took over, and everyone evacuated, there was no one left to keep the door unlocked for.

Latifa tried everything to help her parents from Ballwin. She attempted to get them evacuated to Pakistan. She spoke to U.S. representatives to place them on the relocation list. But as the months passed, no one seemed to care. She received little help. Her parents were still in Afghanistan, without any family.

Then, last March, Latifa’s mother had a stroke.

“Every time I'm calling, [my mom] is just sick,” Latifa recalls. “And then I got to the point, I’m like, ‘My God, what if one of them dies? What if my mom died and my dad is left alone? What were we going to do now?’”

By May, Latifa decided she had no other option. Parents of U.S. citizens were the number one priority on evacuation lists –– and that would give her priority to get out quickly. She would go to Afghanistan and get her parents herself.

“One day I just woke up and I told my husband, I said, ‘You know what? I don't know what to do, but I think the best way … for them to be evacuated will be with me,’” she recalls. “I need to go to Afghanistan.’”

Latifa didn’t tell her parents. She packed a light suitcase with pajamas and her American passport. She wore a hijab that only showed her eyes. And on May 20, two days after booking the tickets, she flew to Dubai and then to Afghanistan.

Over a full day later, she landed in Afghanistan.

Latifa ran into immediate problems upon arriving. Women under Taliban rule can’t take a bus or taxi alone, she says. And if the Taliban found out she was an American, returning to Afghanistan, she didn’t know what would happen. “I could hear my heartbeat because I was really, really scared,” Latifa says.

A far-off relative, responding to a random Facebook message a couple hours earlier, agreed to meet Latifa at the airport. They took a taxi together, not speaking a word, pretending to be brother and sister.

Then Latifa snuck into her parents’ apartment complex in Kabul. She knocked on their locked door. Her father almost passed out. Her mom “cried so hard.” 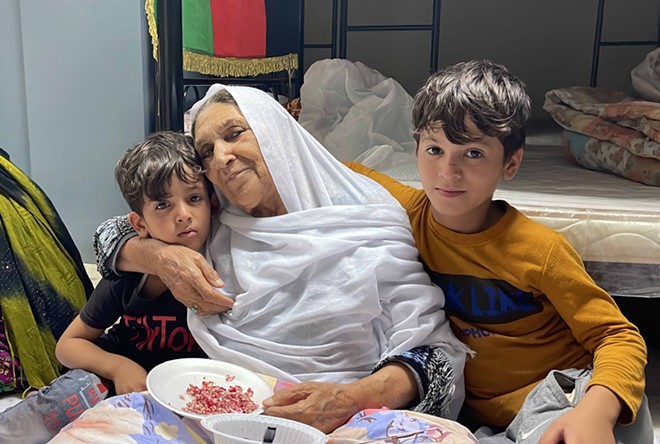 VIA LATIFA SIDIQI
Latifa's mother, BiBi Asifa Danishyar, with children in the Doha refugee camp.
But in reality, Latifa still didn’t know how this would work. For months, she had tried to evacuate her parents to no avail. What would change now?

Sitting in her parent’s apartment for days, she reached out to St. Louis-area congressmen and women, including Ann Wagner (R-Ballwin) and Cori Bush (D-St. Louis).

Wagner’s office responded by telling her that they could not guarantee to evacuate her parents. They also contacted the U.S. Department of State, Latifa says, who told her to leave, immediately, without her parents.

“I was like, ‘What are you talking about?” Latifa says. “I am not going to [leave]. I've been asking you for help for months. My mom is about to die. The woman is sick. She had a stroke. And I am a woman alone. Do you want me to actually walk back to the airport alone? This time I'm here. I'm hiding here. But at least I’m safe.’”

For about 10 days, they went back and forth. The State Department told her to leave. Latifa refused. Leave, refuse, leave, refuse. Bush never even responded, Latifa says.

Back home in St. Louis, Latifa’s son ran her small business. Her husband, who supported her from the get-go, babysat their grandkids. But Latifa’s family worried about her. Moji says she was “in knots.” She serves as the Afghan Community Development Program Manager for the International Institue of St. Louis and has played an integral role in helping Afghan refugees relocate to St. Louis. She knew the reality of life in Afghanistan under Taliban rule.

“We had this heavy burden weighing on all of us because … is she ever gonna come home?” Moji says. “What’s going to happen? God forbid, like, there are worst-case scenarios that we've been thinking about because my mom went into a war zone in a climate like this.”

Latifa spent about 25 straight days in her parents' apartment. She didn’t leave. Until, finally, Wagner’s office connected her with the Afghan American Citizen Service. Shortly after, they received a cryptic phone call from an unknown Afghan phone number. The person told Latifa to meet them at a random address.

When Latifa and her father arrived, it was just a normal house. She worried it might be a “trick.” Maybe it was the Taliban.

They took Latifa and her parents’ documents and, two days later, all three were whisked to a refugee camp on a military base in Doha, Qatar.

What Latifa saw in Doha, though, was much worse than she imagined. “Everything is probably worse than jail,” she says.

At the refugee camp with her parents, Latifa found tens of thousands of refugees hoping for a new life in the U.S. –– only to find themselves stymied by a hopeless immigration process. They were stuck in the middle of the desert, in a windowless facility, where the outside temperature reached 117 degrees and grass was nonexistent.

Latifa calls it “worse than Kabul.” The process seemed neverending, requiring tons of paperwork, even though many people didn’t speak English and interpreters were scant. Some wait a year to get out. Latifa spent much of her time helping other families by translating and filling out documents.

Four months after landing in Doha and five months after leaving St. Louis for Afghanistan, Latifa received a message from the State Department on October 11. Finally, Latifa’s parents had secured their visas. They could be accepted into the U.S..

“That was the happiest day in my life,” she says. “It was embarrassing. I wanted to dance and I was like, ‘My God, when was the last time I've felt like this?’”

On October 19, Latifa and her parents touched down in the U.S. Latifa’s daring plan to pick up her parents from Afghanistan, the one that few people believed in, had worked. “That was like the best feeling in the world,” she says of coming home. “I feel like this is it. I got my parents here. No matter what happens to them, we’re all together here.”

Latifa and her parents are now safe in her Ballwin home. It’s her parents' first time in St. Louis, and they have lots of plans. Moji says she has “fantasized” about living in the same place as her grandparents. “We’re gonna take them everywhere,” Moji says. The Missouri Botanical Garden, Eckert’s Farm, family birthday parties. Friends have already streamed in from Las Vegas and Oklahoma to say hello, and they’re planning a big family Thanksgiving bash in St. Louis.

VIA LATIFA SIDIQI
Latifa Sidiqi (middle) with her family at Eckert's farm –– one of their first trips after landing in the United States.

Moji spoke with the RFT as she was driving to see her mom for the first time since her trip. She expressed a rush of emotions –– elation, pride and exhaustion.

“I cannot believe [my mom had] the courage to just do this,” Moji says. “But I don't encourage anybody to do this. My mom is going in timeout –– trust me.”

Most of all, Moji feels overwhelming admiration for her mother.

“What my mom did,” she says, “is the truest activism I’ve ever witnessed in my lifetime.”