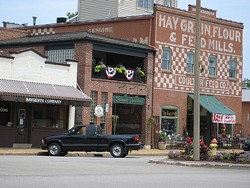 flickr.com/photos/lolololori
Adorable downtown Kirkwood
After a citizen's group forced the Kirkwood City Council to consider an initiative to ban smoking in city bars and restaurant, the measure will now go before voters.

Earlier this month Kirkwood residents opposed to public smoking collected enough signatures to bring the ban before the city council. At last night's council meeting, the board declined to pass the initiative, meaning city residents will now vote on the ban in November.

In 2006, 54 percent of Kirkwood voters rejected a more restrictive ban that would also prohibit smoking on outdoor patios.

Here's betting that Kirkwood voters will approve the upcoming ban. Why? Three reasons:

1. As mentioned, this ban is less restrictive in that it allows for smoking on outdoor patios.

2. Tolerance of smoking has declined sharply since 2006. Although Kirkwood voters rejected a smoking ban just three years ago, a lot has changed in that time. Kirkwood was at the forefront of the smoking-ban debate in 2006. Now they're in the center-rear of the push with other communities -- St. Louis City and Wildwood -- also considering bans and Illinois, Kansas City and other areas having already banned smoking indoors in public places.

3. Kirkwood loves Clayton. This week the Clayton Board of Aldermen voted in favor of a smoking ban effective next July. Clayton's action should resonate largely with the residents of Kirkwood, who love to think of their community as something of a southwestern extension of Clayton with its restaurants, boutiques and storefront sidewalks.

In fact, I'm so confident that Kirkwood voters will approve the smoking ban, I'm willing to make a wager. Whaddya say, Bill Hannegan?

If Kirkwood voters reject the ban, I'll buy you a carton of American Spirits. If voters approve the ban, I'll take a case of Schlafly Pale Ale.