Here's the Agreement that Ended the Occupation of Saint Louis University 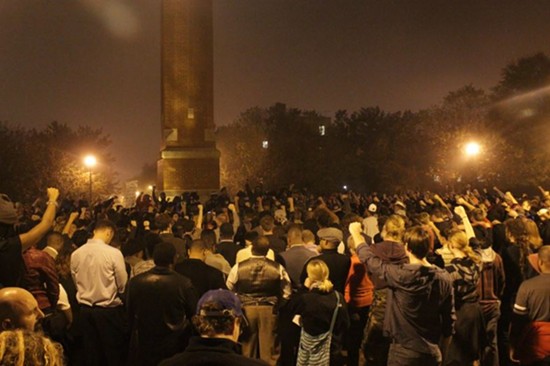 The sit-in dubbed Occupy SLU ended quietly this weekend. By Saturday afternoon, not a tent could be found near the clock tower where protesters massed during the early morning hours of October 13, waving upside-down American flags, raising fists in the air and calling to Saint Louis University students -- "Out of the dorms, into the streets!"

The movement to occupy the private, Jesuit institution kicked off last week's "Moral Monday," and by that day's end more than 50 people had been arrested in a series of protest events around St. Louis. On October 18 protesters and school officials agreed to end the sit-in. In a written statement, SLU president Fred Pestello attributed the end Occupy SLU to "many intense hours of outreach and conversation" with protesters and other community activists.

However, it seems that those intense conversations yielded more than just a broadly worded statement from SLU's president. Shortly after protesters left the campus, a photo of a printed agreement between the school and three protest groups began circulating on social media and right-wing blogs.

The document in the photo is printed on official SLU letterhead and includes thirteen items, including increased funding to African American studies programs, more financial aid for black students and the establishment of a bridge program in the Shaw and Normandy neighborhoods. 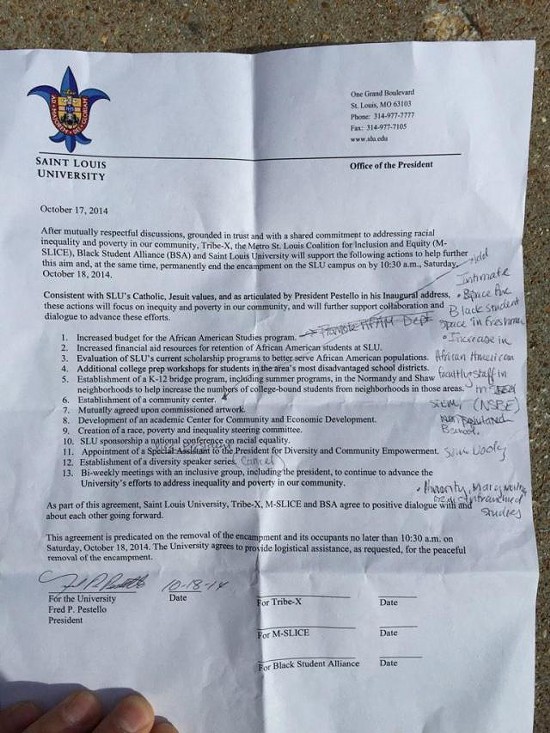 And here's a transcribed version of the document:

After mutually respectful discussions, grounded in trust and with a commitment to addressing racial inequality and poverty in our community, Tribe-X, the Metro St. Louis Coalition for Inclusion and Equality (M-SLICE), Black Student Alliance (BSA) and Saint Louis University will support the following actions to help further this aim and, at the same time, permanently end the encampment on the SLU Campus on by 10:30 a.m., Saturday October 18, 2014.

Consistent with SLU's Catholic, Jesuit values, and as articulated by President Pestello in his Inaugural address, these actions will focus on inequity and poverty in our community, and will further collaboration and dialogue to advance these efforts.

1. Increased budget for the African American Studies program. 2. Increased financial aid resources for retention of African American students at SLU. 3. Evaluation of SLU's current scholarship programs to better serve African American populations. 4. Additional college prep workshops for students in the area's most disadvantaged school districts. 5. Establishment of a K-12 bridge program, including summer programs, in the Normandy and Shaw neighborhoods to help increase number of college-bound students from neighborhoods in those areas. 6. Establishment of a community center. 7. Mutually agreed upon commissioned artwork. 8. Development of an academic Center for Community and Economic Development. 9. Creation of a race, property, and inequality steering committee. 10 SLU sponsorship a national conference on racial equality. 11. Appointment of a Special Assistant to the President for Diversity and Community Empowerment 12. Establishment of a diversity speaker series. 13. Bi-weekly meetings with an inclusive group, including the president, to continue to advance the University's efforts to address inequality and poverty in our community.

As part of the agreement of this agreement, Saint Louis University, Tribe X, M-SLICE and BSA agree to positive dialogue with each other going forward.

A SLU spokesperson confirmed the document is authentic, but could not comment on specific line items. Talal Ahmed, a representative from Tribe X, told Daily RFT the group will release a signed copy of agreement soon.

The end of Occupy SLU appears to have generated mixed reactions within St. Louis' protest community. On Sunday, Tribe X released a lengthy statement via Twitter, and though it doesn't specifically mention the agreement, the statement does reference talks with SLU president Pestello on "significant changes to better SLU's campus wide programs...[and] to also create opportunity and change for African American youth in the region."

The statement continues, "It was after these discussions and seeing the earnest way that President Pestello engaged us that we decided to end the occupation."

Though it remains to be seen how and when the university implements the actions listed in the agreement, Tribe X's reaction to their meetings with SLU officials was far more positive than the aftermath of last week's private summit between St. Louis mayor Francis Slay and five members of Young Activists United, who left that meeting voicing frustration with Slay's attitude and governmental process.