His Unicycle Brought Him Freedom -- and Changed His Life

The slim figure appears almost ghost-like in the photo.

Perched atop, of all things, a unicycle, he leans lightly against the pole of a traffic signal, waiting for the light to turn green. It is January in Brentwood during one of the winter's worst snowstorms. White-knuckled drivers have already turned on their headlights, even though it is still afternoon as they navigate the slush-slicked intersection of South Brentwood Boulevard and Manchester Road.

And here is this young man, not just outside in disastrous weather, but disarmingly relaxed on his unicycle. His right hand rests comfortably on his thigh. His knees are bent as though he is sitting on a bar stool.

If he had been on foot in the blowing snow, he would have seemed pitiable — some sad sack caught out in the elements. But to ride a unicycle in a snowstorm? It sparks something more like wonder.

The photo was taken by a passing driver named Jane Redington. She was on her way from Clayton to Kirkwood and had diverted off the highway because of the storm. As she inched along Manchester, she was stunned to see the unicyclist.

"Who in the hell rides a unicycle in this weather?" she wondered.

Redington was on her hands-free phone with an incredulous friend, so she waited until she was stopped at the intersection and took a photo as proof.

She sent the photo to the Riverfront Times after she got home, and we put it online that evening with the headline, "St. Louis Hero Unicycles Through Blizzard." It was a little cheeky. But there was something truly fascinating about the image of the mysterious rider, blurry through Redington's slushy car window. He somehow manages to seem completely out of place and entirely at ease. He has a whole storm swirling around him, drivers can barely see, and there he sits in perfect balance. 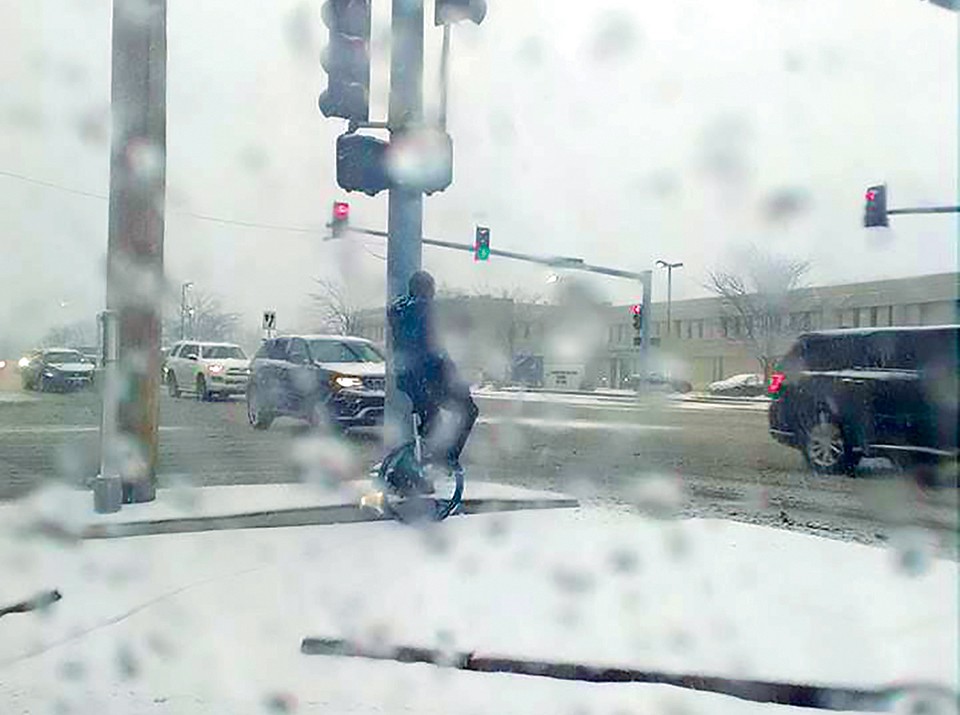 COURTESY JANE REDINGTON
A passing driver took this photo as proof there really was a unicyclist in the snowstorm.

The figure in the photo was instantly recognizable to the unicyclist's friends and relatives.

"It's the only way I get around, whether it's raining, snowing or a tornado siren is going off," he says.

On the afternoon that he was spotted and photographed, he had been pedaling to his 5 p.m. shift at the Brentwood Schnucks, where he would bag groceries and wrangle carts from across the parking lot. Riding a unicycle alongside busy roads has become such a part of his routine that he barely notices the stares anymore. But this was different. In the days after the RFT article went online, coworkers and shoppers alike began complimenting him on his newfound stardom. Friends of his family called with congratulations.

"Mom, everyone at work says I'm famous on Facebook!" he said, his mother recalls.

Austin is five feet ten inches tall and whip-thin with black-rimmed glasses and brown hair that he wears pushed over his forehead. In addition to the unicycle, he likes Legos and sports cars and sports cars made of Legos. He posts funny YouTube videos and occasionally takes care of stray spiders.

In his early days on the unicycle, Austin was caught off guard by the interest he attracted. There were smart alecks, of course, but he was all too familiar with those types. It was the friendly people who surprised him. Strangers smiled or asked genuine questions. Cops waved.

"I think that was the first time he felt like one of the cool kids," says his mother, Laurie Calzada.

They are in the living room of their Brentwood condo, where Laurie moved her two kids in 2011 during a dark time in their lives. The burnt-orange walls, low lights and comfortable couches give the room a warm feel. It is just the two of them since Austin's older sister went off to college. A couple of house cats, Lucky and Lavender, laze around on the thick, beige carpet.

It is a ride of about ten hilly blocks from here to the Schnucks. Austin, who is autistic, first started working at the store as part of the Summer Work Experience Program, which helps high school students with disabilities try out jobs. Schnucks liked him so much they hired him part time after the eight-week program ended and then increased his hours after his February graduation from Logos, a therapeutic school in Olivette.

It is not hard to see why. The teen says he loves "everything" about the job, and he is unyielding in his commitment. When they planned to visit out-of-town family for Thanksgiving, his mother had to reassure him that Schnucks would not fire him for scheduling some time off.

It was Laurie who bought Austin his first unicycle for Christmas in 2017. He had ridden bikes but never seemed to take care of them. She had a hunch something a little outside the mainstream might appeal to him.

"He's always been a non-conformist," she says.

Austin was immediately taken with the unicycle, heading out in the ice and snow to practice for hours. Within two weeks, he could pedal around his neighborhood. He is fascinated by cars, but that has not extended to actually driving. He walks at the pace of a jog, like he is trying to get it over with as quickly as possible.

"I hate walking," he says. "I don't know why. I just feel awkward, like the world around me is so big, and I'm so small."

On the unicycle, it feels a little more manageable. It has changed his life. He is more independent, more confident, happier.

"There was a tear in my eyes for five years every single day," she says.