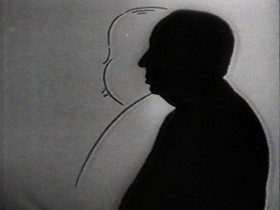 Nope. Wrong Hitchcock. Similar build, though.
Boy, the alliteration in this headline really bugs me. But you know what? There are no synonyms for the word start that begin with the letter H. It's maddening, I tell you. I thought about going with the first name, something like Ken's Capital Commencement, but that sounded a bit fey, even for me. (Which is seriously saying something.)
Anyhow, enough of that. Ken Hitchcock, recently installed head coach of the St. Louis Blues, is leading the team to some rather startling places. He's off to the best start of any head coach in Blues' team history, in fact, and suddenly the St. Louis Blues look less like the chronic underachievers we've seen for the past five-ish seasons and more like the emerging powerhouse I think we were all expecting them to be.
So what's been the difference? And, more importantly, will it last?
Through his first ten contests as head coach of the Blues, Hitchcock is 7-1-2, giving the Blues 16 of a possible 20 points. That 80 percent point mark puts him just ahead of Joel Quenneville, who posted a 70 percent point rate back at the beginning of his St. Louis tenure. So what's been the magic potion for Hitchcock?
Well, I'll tell you what it hasn't been: the power play. When Hitchcock came in initially, he made the rather amazing (and somewhat difficult to believe), claim he could fix the Blues' league-worst power play in a single practice. Ten games in, it doesn't look as if the One Practice Theory of Power Play Excellence is going all that well. The Blues still rank dead last in the NHL with the man advantage, and when David Backes netted a power play goal against Columbus on Sunday night it was the first such goal for the Blues in six games. Perhaps a second practice is in order.
In fact, it hasn't really been scoring at all which has boosted the Blues' record since they got their new sheriff. In those ten games we're talking about here, the Blues have scored more than three goals exactly once. On the other hand, they've scored two or fewer goals in six of those games. They have just 25 goals in 10 games since HItchcock took over, which just isn't enough to consistently get the job done.
Unless, of course, you're doing what the Blues have been doing since Ken Hitchcock became head coach, and that's shut the other guy the hell out.
You want the magic potion? Here it is: goaltending. Actually, just defense period. But especially the goaltending. But especially the defense.
The Blues' defense, led by the tandem of Alex Pietrangelo and Kevin Shattenkirk (and I should really mention Roman Polak as well; he's been nails this season even if he lacks some of the offensive abilities of the other two), has quite simply put the clamps to the opposition in a pretty dramatic way. Over the last ten games, the Blues have three shutouts, have held their opponents to a single goal three other times, and have yet to allow a team to score more than thrice. That's how you beat teams even when you're not scoring.
And then, of course, there's the goaltending. Jaroslav Halak has played much better of late after a brutal start to the season, but Brian Elliott has been an absolute revelation. Elliott is 10-1-0 on the year, and currently sporting an inhuman 1.31 goals against average.
Which brings me to the other question I asked above, about whether or not this will continue. Short answer: no. No team gains 80% of the points for a whole season. It just doesn't happen. But even in a much broader sense, the Blues are in for some definite regression from Elliott, who accounts for ten of the team's thirteen wins. When he falls back to earth, some of those 2-1 victories are going to turn into 3-2 losses in a hurry.
On the other hand, they way the Blues are playing right now is sustainable. The results aren't, but the process most definitely is. Ken Hitchcock has long been touted as one of the great defensive minds in the game, and it shouldn't come as too much of a surprise the Blues' defense took off when Hitch took over. He's also known as a tough coach to play for and a much stauncher disciplinarian than Davis Payne was. Perhaps a hardass is just what the Blues needed for this underachieving squad.
Then again, we've seen this story before. Andy Murray was the toughest of the tough, and the players tuned him out. In came Payne, the buddy coach, and nobody listened to him either. Or if they did listen, they weren't putting the message into action quite right.
What the future holds for Hitchcock and this Blues team is murky, to say the least. The team still needs more scorers, and Brian Elliott isn't going to do this Jaques Plante impression forever. But it's really impossible to be anything but excited about the play we've seen from the Blues in the first ten games under their new head coach.
Now ask me what I think in another ten games.