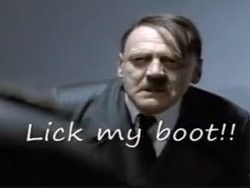 The anonymous opponent of Francis Slay who uploaded a video of the mayor, which compared him to Hitler and implied that he is gay, has taken the footage off of YouTube. We noticed it was down yesterday, one day after Slay's opponent Lewis Reed, president of the Board of Aldermen, sent Daily RFT a statement slamming the video -- a riff on a popular meme -- as offensive and calling on whoever made it to remove it.

Earlier, some Reed backers were sharing it on social media (and so were some Slay supporters, saying it was another reason not to vote for Reed, even though it didn't actually come from the campaign).

Now, it's gone -- though we have some original screengrabs below.

Here's where the video was originally posted.

"It sounds like whoever posted it looked at what Lewis wrote asking for it to be removed," says Glenn Burleigh, Reed's campaign manager, who says he hadn't even realized it was taken down.

He adds, "It was a huge distraction.... These are just distractions to keep people focused on anything but crime in this election."

Reed's statement, which may have prompted the creator of the video to take it down, said:

I personally found this video to be offensive and I call on whoever produced it to take it down. These kinds of things don't help bring our city together or bring the kind of change we are looking to bring on Tuesday, March 5th. But our campaign shouldn't be held responsible for every offensive film, YouTube video, or Facebook comment produced by someone angry with Francis Slay and his record. We are focused on winning Tuesday's election and beginning the long work of healing our city's racial, geographic, and economic divisions.

It's still unclear who is responsible for the video. The primary election is on Tuesday next week.

Below are some screengrabs from the original video.