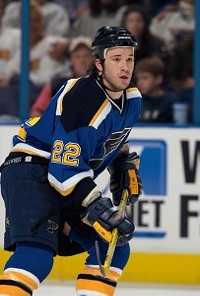 Mike Danton
Remember the case of former Blues hockey player Mike Danton? In April 2004 Danton allegedly hired someone to kill his Canadian agent and mentor David Frost. As it turned out, the hit man was really a police dispatcher who told the FBI about the plot.

Federal prosecutors in East St. Louis charged Danton with conspiracy to commit interstate murder-for-hire. Then, during his time in jail awaiting a court hearing, Danton and Frost reconciled. Once more they were buddy-buddy. Danton eventually pled guilty to the murder plot but refused to provide a motive or admit that he was targeting Frost.

It was confusing to everyone involved in the case, including U.S. District Judge William D. Stiehl. Prior to sentencing Danton to 7.5 years in prison, Stiehl looked down from his bench to proclaim: "In over 18 years on the bench I have never been faced with a case as bizarre as this one."

Well, guess what judge? It gets stranger -- at least if you believe Danton's former agent David Frost. According to Frost, Danton is to soon begin writing on Frost's blog Hockey God Online. Never mind that Danton is still in the penalty box so to speak with another year-and-half to go before he could be released from federal prison for good behavior. For Frost, though, Danton's name alone might generate some much-needed hits for his blog.
The former hockey agent (Frost surrendered his agent's license a few years back) bills his blog as a no-holds-barred take on the NHL. Or in Frost's garbled English, the blog features "Hockey's number # 1 bad boy controversial figure former NHLPA agent Dave Frost. His behind the scenes expertise look, that no one else will tell you about today's game." 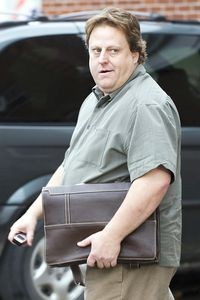 David Frost
Frost founded the site this past November, just three days before a judge in Canada acquitted him on charges of sexual exploitation stemming from a coaching gig he held in that country in mid-1990s. According to reports, Frost shared an apartment with several of his teenage players at the time and often instructed the players to have sex with their girlfriends while he watched. One woman testified that Frost would allow her former boyfriend to have sex with her only if Frost also joined in on the action.

Frosts relationship with Danton is also creepy. Danton was just eleven when he started playing hockey for Frost in Canada and often spent periods traveling and staying with his former coach and agent. (The two were sharing an apartment in suburban St. Louis when Danton allegedly arranged to have Frost killed.) In a letter from prison, Danton says he thinks of Frost as more of a father figure than an agent. Danton disowned his birth-family years ago. In 2002, he changed his name from "Mike Jefferson" to "Mike Danton" to further disassociate himself from his family in Canada.

The section of Frost's blog reserved for his former player, Danton's Den, has sat empty since the site went online in November. Curious as to when we might expect a few posts from Danton, I e-mailed David Frost a few weeks back. His two word reply? "Stay tuned!"

Uhh, okay. We're still waiting. In developing news...Frost's blog now states that members of "Hockey God Online" will get first crack at two soon-to-be-released books: "The True Story of Former NHLPA Agent David Frost" and "When the Ice Melts" by Mike Danton. Maybe then Judge Stiehl -- and the rest of us -- will finally get some answers to these two men and their utterly bizarre relationship.