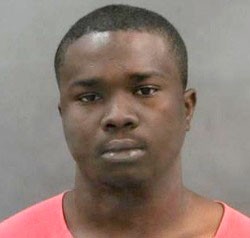 Update below: Two young men tried to escape an armed suspect in north St. Louis yesterday afternoon, but the gunman fired at them as they attempted to flee -- killing one and critically injuring another, police say.

The deceased man, who police have not yet named, is the 55th homicide victim in the city of St. Louis in 2013. Police say he was hit in the chest and transported to a hospital where he was pronounced dead a short while later.

The other victim was hit in the back, police say, and is in critical, but stable condition.

As of this writing, police have not yet released a formal report on the shooting, but KSDK (Channel 5) reports that the two men in their 20s were arguing with a suspect "about a debt."

The incident happened after 4 p.m. on the 3900 block of Ashland Avenue, police say.

The argument turned violent and the suspect, who police also have not named, allegedly pulled out a gun and started firing while the three were on a porch. The victims then attempted to run away into the home but were hit with bullets, police say.

There is reportedly a person of interest in the shooting, but it appears cops have not yet made an arrest.

Update, 2:58 p.m.: St. Louis metro police officials have released a report on last night's shooting and have identified the fatal victim and the suspect.

Charles Moorehead, a twenty-year-old who lived on the block where the shooting took place, was hit in the chest and pronounced dead. The second victim was also a twenty-year-old male, and is recovering from a gunshot wound in the back.

Police say there was a third victim, a 29-year-old female, who was not injured.

The suspect has been identified as Ralph Cato, a twenty-year-old male who lives on the 1400 block of Cass Avenue in north St. Louis.