SLMPD
This still from the Drury Inn & Suites security camera footage shows the suspect who shot and killed a night manager. Police say the man was wearing a Chicago Bulls ball cap, a black or brown leather waist-length coat, a black tee shirt with white "Adidas" logo across the front and khaki pants.

Armed robbers, a jealous boyfriend and a gunman killed six men in separate (and likely unrelated) shootings, and police shot and injured a shoplifting suspect and two suspected car thieves who tried to ram their cars into officers. 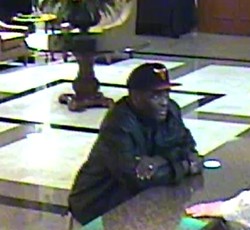 SLMPD
The suspect who shot the night manager at Drury Inn & Suites.

St. Louis Metropolitan Police are on the hunt for a gunman who killed the night manager of the St. Louis Drury Inn & Suites, near Hampton Avenue and Interstate 44, during a robbery attempt before 3 a.m. early Thursday morning.

The manager, Scott Knopfel, a 50-year-old white man from the 6500 block of Southwest Avenue, was shot in the head.

The suspect, described by police as a black man in his 40s, entered the hotel lobby around 2:50 a.m., pulled out a handgun and jumped over the counter. When the robber and Knopfel struggle over opening the cash drawer, the robber shoot him in the head, tucked his gun into his waistband and walked out of the hotel.

Police released this clip from the hotel's security footage of the robber entering and leaving the hotel:

Knopfel's murder was the bloody ending to a violent day and night in St. Louis, starting with an Des Peres Police officer-involved shooting near West County Mall Wednesday afternoon.

Wednesday, 1:30 p.m. The day of violence started at the TJ Maxx department store at 12129 Manchester Road, where store security saw two suspects removing tags from clothing, steal the items and take them to a black Dodge Charger in the parking lot.

Des Peres Police located the Dodge Charger as the suspects were leaving the store parking lot, according to St. Louis County Police. One officer pulled up behind the car and turned on his emergency lights while a sergeant stopped a patrol vehicle in front of the Dodge Charger, blocking the suspects from escaping west down Manchester Road.

As the Des Peres sergeant whose car was blocking traffic walked toward the suspects to arrest them, the suspect driver ran the car onto the curb and started driving towards him.

The sergeant, in fear for his life, fired at the vehicle, striking the driver in the left arm, according to St. Louis County Police, who are investigating the shooting. The Dodge Charger narrowly missed the sergeant and came to a stop in front of the Edward Jones building.

The gunshot wound was not life-threatening, and the passenger was not injured, police said. Both suspects were arrested without further incident.

Wednesday, 7:30 p.m. An armed burglar shot and killed a 34-year-old man in north St. Louis. The burglar, described by police as a 29-year-old black male, entered a home in the 5000 block of Cates Avenue.

The police incident report says the suspect "gave some instructions" to the man and 42-year-old woman inside the home. KSDK-TV (Channel 5) reports the burglar ordered the man to start running and shot him when he complied.

Police found him lying in the street, unresponsive, with a gunshot wound to the chest, and he died later at the hospital. The female victim was not injured.

The officers were trying to find primary suspects in multiple vehicle thefts in St. Louis County and city in recent months. Police surrounded a large detached garage in the 600 block of Spring Drive when a truck burst through the closed garage door and drove straight into several police vehicles.

Officers fired on the truck, striking two of the three suspects. St. Louis County Police did not know the condition of the two injured suspects.

The Missouri State Highway Patrol will take over the investigation.

Thursday, 12:35 a.m. Nineteen-year-old Kenny Burgett, from the 7800 block of Tennessee Place, was shot and killed by his girlfriend's 22-year-old ex-boyfriend, police said. The gunman went to his ex-girlfriend's home on Tennessee Place and challenged Burgett, the current boyfriend, to a fist fight. When Burgett came outside to fight, the suspect shot him.

Burgett ran a block to the west, where he collapsed. He was pronounced dead at the hospital.

Thursday, 12:45 a.m. Two men were killed during a robbery attempt in the 3500 block of Osage Street early Thursday morning.

The three robbers exited a light-colored vehicle in a nearby alley, walked up to the three victims and talked with them briefly. Then the suspects announced a robbery, during which at least two of the suspect fired shots.

Police released this video of the robbers arriving on the scene and running away after the shooting:

The third victim, a 21-year-old man, was not shot.

Update, 10:20 a.m.: Information about this shooting has been updated with identifying information for the victims and a video.

Thursday, 8 a.m. St. Louis Metropolitan Police detectives responded to a shooting at Chouteau Avenue and Tucker Boulevard, where a victim was found dead from a gunshot wound inside a car. A witness said the car drifted into another vehicle stopped at a red light and a man jumped out and ran, according to the St. Louis Post-Dispatch.