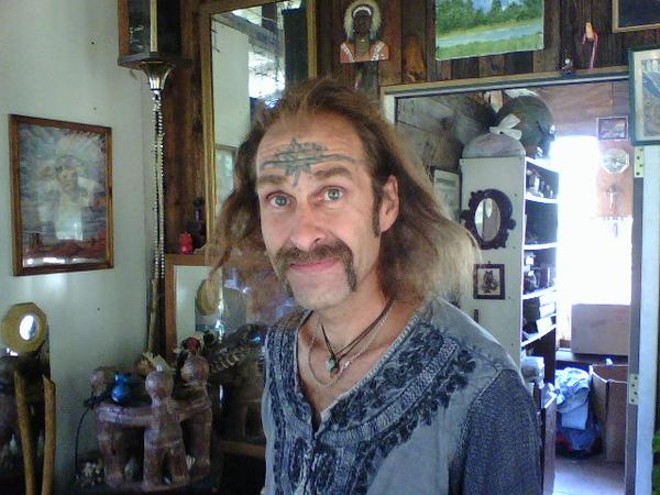 RFT FILE PHOTO
Chief Wana Dubie was born Joseph Bickell before legally changing his name in 2007.
Chief Wana Dubie, whose goofy name and forehead tattoo of a cannabis leaf belied a serious political agenda, died this summer, on August 17. But two months later, the senatorial candidate responsible for the immortal slogan "Dubie vs. Blunt" has yet to be buried.

Dent County Coroner Gina White says that Dubie's family made it clear they had no interest in claiming his remains. So after he was cremated — a wish he had expressed in hospice — her office thought it might have to take responsibility for the body. "It's a rare situation," she says. "I think we've maybe had four in the last sixteen years. But it happens." At that point, the taxpayers reimburse the crematorium, usually making a claim against the estate to recoup expenses, and the deceased gets a pauper's grave — no ceremony, and a simple marker in a shared county plot.

But Sarah Plank wants to give Dubie the burial he deserves. The 27-year-old hairdresser lives in Salem, Missouri, the Chief's longtime hometown. While she wasn't personally close to him, she remembers him fondly as a friend of her mother's — and recalls the kindnesses he showed her family.

"My mom was bipolar and bedridden for two years," Plank recalls. "He made her get out of bed. He got her off of painkillers, helped her get out of her funk." Later, when her mother's home was infected with bedbugs, Plank was too afraid to visit. Not Dubie. Plank says that before turning to politics — and his quest for marijuana legalization — he'd been an exterminator. He put his skills to work on eradicating the bugs.

"The stuff he's done for my family is stuff I can never repay him for," she says.

Mike Thomas, the owner of Rolla Cremation and Memorial, says he's offered Plank a sharply discounted bill. If she can raise enough to cover his business' costs, he will release Dubie's remains. "Sarah is trying really hard to make this happen," he says.

Indeed, Plank says she and her friends have now raised more than $700, just $170 shy of what she needs. She's organized a chili cookoff for this Saturday, and she's confident it will bring in the remaining funds — and then some. (Follow #FreetheChief and #UnpopularforJesus on Facebook for more info.) "I'm hoping I'll raise enough I can just take a pile of cash to someone with medical bills," she says.

And after that, she says, she hopes to take his cremains and scatter them out West, just as he desired.

The only catch is that, as Plank freely acknowledges, Dubie's dream was to be scattered atop Pike's Peak — and Plank has decided she can settle for Oregon, since she has a friend visiting there next spring who can give Dubie a free ride.

But Pike's Peak had significance for him. As Andrew Sheeley, a filmmaker who made a documentary focused on Dubie, wrote in an obit in the Salem News, Dubie associated the spot with his longtime quest for marijuana legalization.

In his opinion, however, that wasn’t his greatest victory of the year. That came upon the top of Pike’s Peak in Colorado when Wana Dubie finally got a doobie of legal weed and fired it up. In that moment, there were no cops, or judgements, or any more strife for the aging hippie. Thereafter, The Chief climbed down from the mountain and quietly declared victory.

Mark Kilgore, an engineer and "vicar for Jesus" who became friends with Dubie in his final three years of life, says he's going to Pike's Peak next July. He too heard Dubie express his wishes to be scattered there; he'd like to help.

"I don't want to step on anyone's toes," he says. "If it's possible for me to satisfy his wishes, I'd like to do right by the Chief."

Plank hadn't heard of Kilgore prior to hearing from the RFT, but she says she'd be willing to talk to him. "I'd definitely like to talk to him before I just handed my friend's ashes over," she says.

And even though Kilgore and Plank have never met, they agree on one point: The old hippie who devoted his life (and gave up five years) to a once quixotic, and now increasingly mainstream, cause deserves better than a pauper's grave.

"He was a great guy," Kilgore says. "I wish we still had around. Now I just want to do whatever would put a smile on his face and make him happy."