How Five St. Louis Collectors Accumulated Troves of Treasure — One Piece at a Time 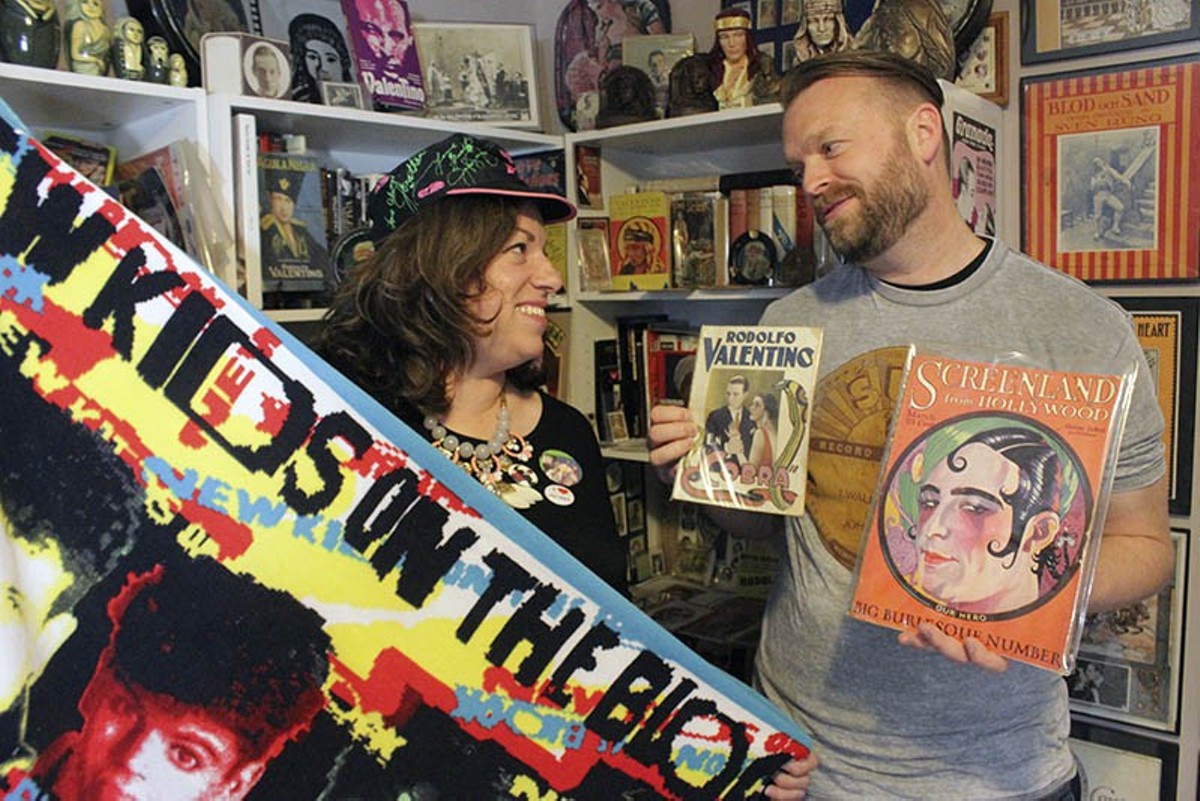 Boy band or Italian sex symbol? Audra and Brad Frick have built shrines to the New Kids on the Block and Rudolph Valentino, respectively. PHOTO BY ALLISON BABKA

Between the two of us, we really could find almost anything you'd need in your life."

Audra Frick isn't wrong — if what you need is a lot of wonderfully random stuff. She and her husband Brad are hanging out in the basement of their south county home, completely surrounded by interesting things. An ancient Ms. Pac-Man arcade game. A "She-Ra" Crystal Castle playset. Racks and racks of clothing for their LuLaRoe boutique. A life-sized Teenage Mutant Ninja Turtle. Just about every twee decor item Target has sold in the past decade. The couple's lower level would be a carnival for the over-stimulated and a nightmare for OCD sufferers.

And all that is just an appetizer for the main course: an impressive feast of nostalgia safely tucked away from the grimy hands of children and the evil threat of sunlight.

"Well, I'm not going to put it in my living room. That would just be weird," Audra says of her extensive collection of New Kids on the Block memorabilia.

Both Audra and Brad are collectors. In and of itself, this is nothing special; author and professional organizer Regina Lark claims that the average U.S. household owns 300,000 things, from office supplies to bracelets to laptop cords. In that sense, the entire population is collecting the stuff of life, almost every day.

But the deliberate, joyful nature of their acquisition is what sets Audra and Brad apart. People like them fixate on specific clusters of things for various reasons: nostalgia, investment, loyalty, preservation. There's a certain glee that comes with unearthing the pop-culture tentpoles of your childhood or finding that special something that's been eluding you for years — a never-ending hunt that sometimes results in a big score. Just one more of these, you think, and I'll die happy.

Of course, that kind of procurement has a way of becoming tinged with darkness. We've all seen Hoarders. When does a person have too many of anything? What is the line between collecting and obsession?

Luckily, the Fricks and the other St. Louis collectors we spoke to avoid the darkness, making sure that their acquisitions don't take over their lives or overwhelm their finances. For them, their collections are conversation starters — and real points of pride. We all accumulate stuff. Why buy mindlessly when there's such fun to be had in doing it with purpose? 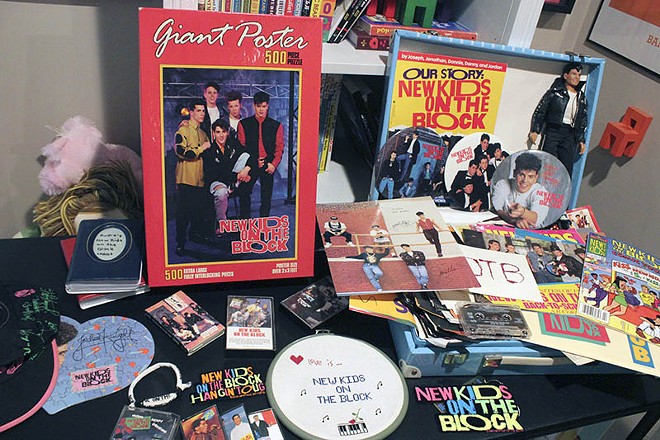 PHOTO BY ALLISON BABKA
Some highlights from Audra Frick's collection.

The New Kids on the Old Valentino Block

At 36, Audra Frick is an impeccably dressed writing consultant with a hankering for grown-up brands like Kate Spade. But in her basement, as she pulls out her array of New Kids on the Block paraphernalia, she might still be a giddy teenager.

Yes, the same New Kids on the Block that made every sixth-grade girl swoon in 1989, thanks to pop hits like "I'll Be Loving You Forever" and "Hangin' Tough." Audra became smitten with Joey, Jordan, Donnie, Danny and Jon after a neighbor gave her a NKOTB cassette for her birthday, and since her tween years, she's amassed a sizeable collection of band pins, magazine centerfolds, dolls, clothing and letters. She's pared down her stash over the decades as she's changed towns and houses, but she's carefully preserved the best of it within a large, tough suitcase.

"The last time I got it all out was around 2002, but I'm so glad I have this stuff from such an important time in my life," Audra says. "I was so bananas over New Kids. I used to cry watching the previews on their concert VHS tape."

Showing off a cross-stitch wall-hanging inscribed with "Love is... New Kids on the Block," Audra reveals that she eagerly forked over $20 to join the band's fan club back in the '80s. That small fortune netted her special patches and pins, exclusive photos, access to a 1-900 hotline that cost $2 per minute (it's now disconnected — we tried), and an official computer-signed letter from the band welcoming her to the club and sharing that Danny's favorite hobby is exercising. "I don't even think I got a t-shirt with it," she remembers, a bit forlorn. "I was also in the Debbie Gibson fan club, and I got a sweatshirt for that."

Audra perks up as she rifles through her stash, giggling while pulling out band-approved items that seem quaint by today's standards. Mini NKOTB "cassettes" with bubble gum and trading cards? Check. A heart-shaped puzzle with Jordan's face on it? Check. Comic books about tour adventures? Check!

She puts on a black painter's cap covered in neon band member "signatures" and then smiles as she drapes an ancient New Kids beach towel over her shoulders. "We still use this at the pool at my mom's house. She said I could have it over here tonight, but I have to bring it back," she says.

Audra isn't the only Frick with a special collection; her husband Brad has his own treasure trove, though it's of a decidedly different nature. Let's just say that a historian probably would be more interested in seeing the makeup compact used by silent film star Rudolph Valentino than a Joey McIntyre poster ripped from "Tiger Beat."

The Italian-born Valentino became one of Hollywood's first sex symbols in the '20s, thanks largely to his role in The Sheik. Connoisseurs the world over seek out the actor's personal belongings and film memorabilia. But who knew that one of the foremost collectors lives in St. Louis? 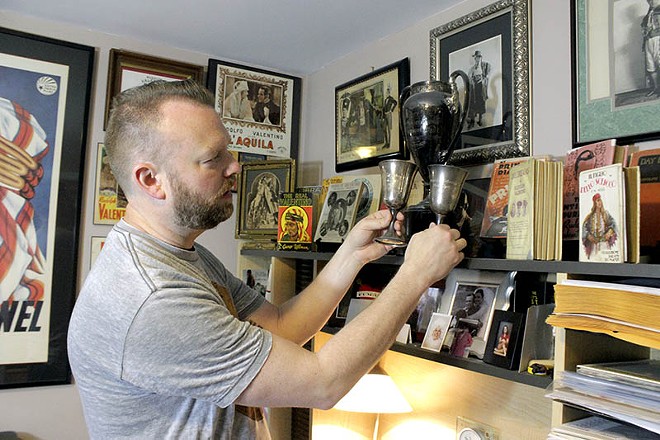 PHOTO BY ALLISON BABKA
Brad Frick shows off the actual goblets that were the costume contest prize won by Valentino and a lady friend.

Brad was only five when he saw Valentino's face on one of his mom's movie magazines. The image must have stayed with him, Brad says, because when he came across The Sheik on TV at 2 a.m. during his high school years, he felt compelled to watch and record it.

"I was totally hooked, started finding Valentino things to collect and found a newsletter," says Brad, now in his early 40s. "At that time in 1995, it would have been Valentino's 100th birthday, so I went to Hollywood to meet other fans from all over the country, many of whom I'm still friends with today."

Brad, who also collects autographs and Elvis Presley albums, became even more serious about finding authentic Valentino items. He started a blog as a reference guide to collectibles, drawing in hundreds of followers and giving people a place to discuss rare, expensive finds. Over the years, he's been able to amass some of Valentino fans' most sought-after items.

"It's getting tougher and tougher to find, because they made this stuff back in the '20s," Brad says. "Original Valentino movie theater posters from Italy in the '20s go for tens of thousands of dollars now, and there aren't many of them."

He doesn't have any of those, but he does have plenty of rare, highly coveted lobby cards, sheet music from the actor's films, a shield that was used during a scene and Valentino's own books with doodles written in them. One of Brad's most unique treasures is a set of goblets that Valentino and a lady friend won during a costume contest. A tight-knit collector community and online communication — eBay, specifically — makes finding pieces a little easier than it used to be, though the passage of time makes it harder and harder to locate the really old stuff in pristine condition.

But even though Brad has become a recognized expert in this field, he won't show just anyone his secret cave of treasures. A senior allocator for a toy company by day, he's justifiably vigilant about staving off potential harm to his amazing artifacts.

"I don't show it off a lot and don't like sunlight near it — it'll fade these very old things," Brad says. "I might display a few at home, but they're mostly hidden."

With this much real estate devoted to cherished memories and expensive artifacts, as well as to the retro toys and decor mentioned before, an observer might wonder if it's ever all too much for the Fricks. And, honestly, sometimes they wonder the same thing.

"If I were to buy someone's entire Valentino collection, then it might be a challenge," Brad concedes. 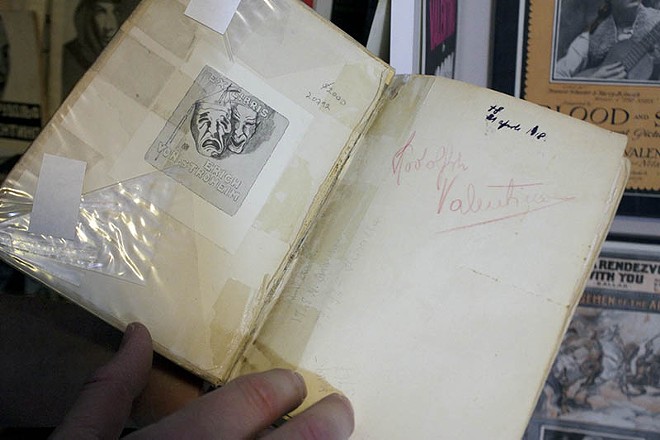 PHOTO BY ALLISON BABKA
A book from Valentino's library, with his name handwritten inside.

"I can be obsessive," says Audra. "When I really like something, I want to have all of those things." Over the years she's also collected pencils, scarves, purses and stationery, some of which she's since sold or donated when the numbers became overwhelming.

"I wonder if it's bad for the kids to see. How will they pull back if we're not modeling that behavior?" she says. "But if it makes you happy and doesn't infringe on other areas of your life, like the kids tripping over it or having trouble from a financial standpoint, then who cares?"

The Frick children, ages six and four, are still too young to truly appreciate the collections that make their parents grin, but Audra says the little ones are on the path.

"They know who New Kids are and know the song 'Step by Step' from my listening to it in the car. They even request it," Audra marvels. "I'm pretty proud of that. I can be done with parenting now."