It's illegal to eliminate a juror on the basis of race. But in practice, it's all too common 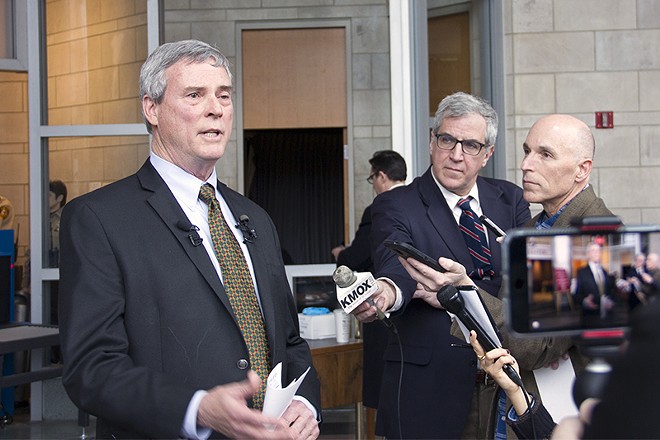 DANNY WICENTOWSKI
Bob McCulloch tried a novel strategy to strike Black jurors when he was the prosecuting attorney for St. Louis County.

This story was commissioned by the River City Journalism Fund as part of its series Shadow of Death, which considers St. Louis County's use of the death penalty.

No less than the great defense attorney Clarence Darrow believed that more than lawyers' rhetoric, more than the evidence, a verdict of guilt or innocence for many defendants rested on the 12 people judging them. "Never forget," he wrote, "almost every case has been won or lost when the jury is sworn."

The theory may sound like hyperbole, but people who study trials have found plenty of evidence that there's something to it — and that a jury's racial composition, in particular, can have a huge impact. Says Peter Joy, a professor of law and director of the criminal justice clinic at Washington University School of Law, "Every study ever done shows that a diverse jury leads to better deliberations." Jurors forced to be in a room with people from different backgrounds discuss the case longer, the studies show, and are more likely to perform effective fact-finding, mitigating their individual biases. On the flip side, all-white juries convict Black people more often than they do white people.

Yet many juries have very few, if any, Black members, even when drawing from communities with significant Black populations, and even when life and death are at stake. In 2014 and 2015, four Black men who'd been sentenced to death in St. Louis County were executed by lethal injection. Of those four, two had been sentenced by all-white juries, even though the county was then 20 percent Black and it's illegal to remove jurors for their race or religion.

How does that happen? Legal experts blame what are called peremptory challenges. Their use in St. Louis County is now front and center in the case of Kevin Johnson, who is scheduled to die by lethal injection next Tuesday, November 29.

Lawyers can always strike a juror for cause — for example, a rape victim might be ill-equipped to bring impartial judgment to a rape case, or a cop (or even someone married to a cop) might have trouble fairly judging a police officer accused of assault.

Peremptory challenges are different. In these more limited cases, lawyers can strike a juror without explanation, and for the most spurious of reasons. "My client sitting next to me can feel like they got a wrong vibe, and they can strike for that," Joy explains.

But they can't strike for race — or religion, or gender. The Supreme Court made that clear in 1986 in Batson v. Kentucky, which has led to what are called Batson challenges. If defense attorneys argue that a juror is being struck due to their race, the prosecution must then offer a race-neutral reason. The judge then decides if the defense has made the case that the strike was improper.

Some experts believe the standard asks way too much of the defense. Joy notes that the Supreme Court has found that prosecutors' explanations don't have to be "persuasive, or even plausible." It's enough if there's "facial validity" — basically, as long as it could be true, a judge can accept it. As a result, in practice, Karen Kraft, a former public defender who led Missouri's Capital Litigation Division, says judges seldom balked at peremptory strikes, even in the death-penalty cases she specialized in.

She recalls an instance when a prosecutor struck a Black juror from a death-penalty case and, in chambers, came hard at the judge as he weighed the back-and-forth over Batson. "The prosecutor said to the judge, 'If you tell me I can't make this strike, you're calling me a racist.'" The judge backed down; the Black juror was struck.

"Most of the time, judges do not want to outlaw a strike," Kraft says. And when they allow it, appellate courts tend to defer to them.

Booker T. Shaw was a St. Louis prosecutor and circuit judge before being appointed to the Missouri Court of Appeals. (He's now a partner at Thompson Coburn.) He says he didn't see dubious peremptory strikes during his years on the trial court bench — although he acknowledges that, as a Black judge, his very presence may have discouraged lawyers from being too aggressive. His experience is one reason he became convinced that appeals courts should err on the side of trusting the judge who was in the room.

"It's one of those things where you have to rely on the intelligence and sensitivity of the judge to observe what's going on in that place or time in his or her courtroom," he says. "You're looking at a dry transcript of what happened. I believe the vast majority of judges are fair and impartial. You have to trust their instincts on it." And so once a Black juror is struck, appellate courts can be loath to second-guess that.

For Kraft's client Herbert Smulls, who was sentenced to death by an all-white jury in 1992 (and later executed), prosecutor Dean Waldemar struck the final Black juror from the pool. Challenged by defense attorneys, he claimed he had a policy against postal workers.

"It's been my experience in the nine years that I've been a prosecutor that I treat people who work as mail sorters and as mail carriers ... for the U.S. postal office with great suspicion," Waldemer explained, according to St. Louis Magazine. "In my experience, in many of the trials that I've had, they are very disgruntled, unhappy people with the system and make every effort to strike back." Maybe that was the reason — or maybe it was the fact that the majority of postal workers in St. Louis County are Black. Says Kraft, "That was typical." (For another case involving the gambit, see "Marcellus Williams Has a Strong Case for Innocence. He's Still on Death Row.")

Waldemar's technique earned him infamy in activist circles, which dubbed it "the Postman Gambit." But it didn't leave a mark on Waldemar's name; he's now a St. Louis County judge.

Some states have decided they're uncomfortable with the Batson standard. In Washington, the rules now hold that instead of "facial validity," a judge should view peremptory strikes from what a "reasonable, average person" would think — a higher standard for prosecutors. (If it looks like a duck, a reasonable, average person may well conclude it's a duck, no matter how much the prosecutor protests.) Arizona has gone even further: It's outlawed peremptory challenges entirely. Now if prosecutors want to strike a juror, they must show cause.

Such reforms don't even seem to be on the table here. "There is no groundswell to change things in Missouri," Joy says drily. That's even though, by the end of her long career in 2016, Kraft says she hadn't seen much change in pattern or practice; judges seldom seemed sympathetic to Batson challenges unless they were in the small group who'd been struck down for getting it wrong in previous cases. Otherwise, they kept excusing Black jurors.

You couldn't blame a defense attorney on capital cases for losing hope, but Kraft hasn't. She doesn't agree with Clarence Darrow on jury selection. "I do think you can win people over," she says. "I've had a lot of white jurors who've been very, very sympathetic to my Black clients. I think it's possible to do it. It all depends on what they hear. ... It can turn the tide."

Even so, she adds, "I certainly think that people have received the death penalty who didn't deserve it — for sure. Including some of my clients." Barring a last-minute reprieve, one client she cites as not deserving — Kevin Johnson, who killed a Kirkwood cop at age 19 — will be among them next week.

Johnson's two juries included both Black and white jurors, but not for a lack of trying on the part of prosecutors. As an independent prosecutor detailed in a November 15 motion seeking to vacate Johnson's conviction, then-Prosecuting Attorney Bob McCulloch saw a death-penalty conviction overturned by the Missouri Supreme Court just weeks before Johnson's trial, with the court finding that "the prosecution's stated explanations for striking a Black juror were 'implausible and merely a pretext to exercise a peremptory strike for racially discriminatory reasons.'"

Seeking to avoid the same fate in Johnson's trial, McCulloch tried a novel strategy: He chose to make fewer peremptory strikes than he was allotted, apparently calculating that the judge would then strike potential jurors in numerical order — which in this case would eliminate four Black jurors.

The judge confirmed that he would indeed make the strikes — but stated that he'd follow his "longstanding practice" of taking race into account, "ensuring that reducing the remaining juror pool to the final 12 jurors would not result in the arbitrary elimination of Blacks."

McCulloch called the rule "silly" and "bizarre." He asked, "If I don't have nine people I don't strike, why am I being penalized?" It was an incriminating response — suggesting that the judge being mindful of Black representation on the jury penalized the prosecution.

Ultimately, Johnson ended up with a jury of six white and six Black members — and they hopelessly deadlocked on whether he was guilty of first-degree murder or a lesser charge.

When Johnson went back for a second trial, prosecutors again chose not to use all their peremptory strikes, but this time the judge used random strikes on the rest of the pool. Johnson ended with three Black jurors — and a guilty verdict of first-degree murder.

Johnson's lawyer appealed that sentence on the grounds that a Black juror had been wrongly removed on the basis of her race. The case went to the state Supreme Court, and its then-chief justice, Richard B. Teitelman, found the Black juror's removal spurious. He called for Johnson to get a new trial, but Teitelman's dissent was not enough to overturn the case.

The independent prosecutor newly appointed to Johnson's case is now trying, 15 years later, to get a different outcome based on those same facts. Much has changed in St. Louis County since then. But this time, the clock is ticking.

For more on the River City Journalism Fund, which provided funding for this project and seeks to support local journalism in St. Louis, see rcjf.org.