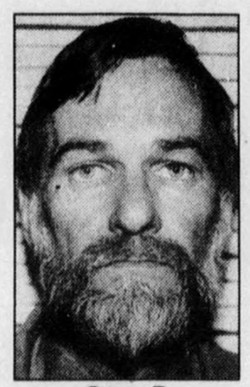 Police booking photo
Gary Muehlberg in 1993.
After February 1991, Burgoon says the St. Louis Major Case Squad came to an agreement with federal law enforcement: The next time the Package Killer struck, local police would seal off the scene so that investigators from the FBI could fly in from Quantico, Virginia, and process all the evidence.

But the notion that serial killers never change their methods is more fiction than fact.

Kenna Quinet is a professor emeritus of criminology from the University of Indiana-Indianapolis and one of the few academics who studies serial killers.

“They change their M.O. all the time. They want to kill as many people as they can for as long as they can,” she told the RFT in 2019. “They don’t want to get caught.”

A man who lived on Miami Street in south St. Louis was the police’s prime suspect for the Package Killer murders at the time. Police interviewed him on multiple occasions, showing him pictures of the victims.

“I didn’t worry because I didn’t know any of them,” this man told the RFT nearly 30 years later, adding that he believed that meant the police wouldn’t be able to pin anything on him.

But then came one more photo. “Then there was a blond that I did recognize,” the man said, “and I thought, ‘This is not good.’” In 1992, the Post-Dispatch reported that police had physical evidence connecting the man to Mihan’s murder, likely the blond the man had recognized. Police asked Lincoln County’s prosecuting attorney to bring charges.

Ed Grewach, now the general counsel for the Missouri Gaming Commission, worked for the Lincoln County Prosecuting Attorney’s Office in 1990.

According to Grewach, the only physical evidence connecting Mihan to the man on Miami Street was candle wax found on Mihan’s body. “She was apparently tortured before she was killed,” Grewach says. “This guy had this candle with the same type of wax, but that candle was sold in hundreds of different outlets.” The man was questioned extensively on numerous occasions but never charged.

Throughout the 1990s, Burgoon and other detectives continued working the case, investigating more than 450 leads over three years. Detective Sergeant Jodi Weber, the woman who eventually caught Muehlberg, says that it was only dumb luck that allowed him to evade capture at the time.

“He was never on any detective’s radar,” she says. “More than 50 investigators worked on these cases back in the day, and not one linked anything to him.”

Bill Carson worked the case as a detective in the early 1990s. Now he is chief of police in Maryland Heights, a municipality with only one unsolved homicide in its entire 37-year history: Brenda Pruitt. “Over the years, there were a lot of persons of interest, people that we thought were capable of doing this that we looked at long and hard,” Carson says. “[Muehlberg] was not on our radar.”

In 1995, a series of similar murders occurred in St. Petersburg, Florida, and St. Louis detectives were intrigued enough to travel there to investigate.

They had no idea that the Package Killer had been sentenced to life in prison earlier that year. That case didn’t involve packages or sex workers. It didn’t even involve a woman.