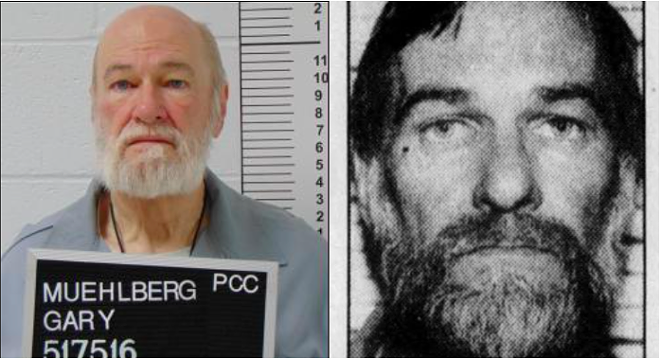 Missouri Department of Corrections, Police Booking Photo
Gary Muehlberg, revealed to be the so-called Package Killer, in March 2020 and in 1993.

Born in 1949, Muehlberg grew up in Bellefontaine Neighbors at a time when the north-county municipality was experiencing rapid growth. Muehlberg’s father, William, had been a policeman until he left to join the military during World War II, earning a Purple Heart after being wounded in the Pacific Theater. He later served as mayor of Bellefontaine Neighbors for one term, 1955 to 1957.

Less is known about Muehlberg’s mother, Palmyra. One of Muehlberg’s ex-wives tells the RFT Christine worked in accounting for a department store.

In 1966, when Gary was 17, the family moved to Salina, Kansas, where his father took a job with an oil company.

Like their father, both Gary and his brother, Ronald, enlisted in the military during the Vietnam War. Gary completed basic training in 1968, though it’s not clear if he was ever deployed overseas. That same year his older brother, who was 21, died during battle in the Mekong Delta.

Gary married for the first time in June 1970. A grainy photo in the Salina Journal announcing the wedding shows a tall Muehlberg flashing a toothy grin. The photo, even in its low resolution, belies the terror that was to come. 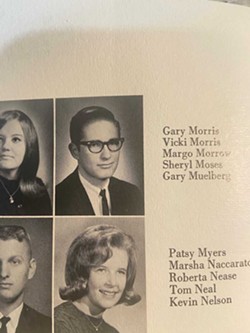 COURTESY PHOTO
Yearbook photo of Gary Muehlberg.
In February 1972, Muehlberg was charged with rape, kidnaping and aggravated robbery after breaking into a house in Salina where an 18-year-old girl was home alone. She told police the 23-year-old Muehlberg held her at knifepoint, raped her, and then forced her to accompany him to the bank to withdraw $25 to hand over to him. A judge ordered a mental-competency examination be done on Muehlberg prior to his trial. He was convicted on the robbery charge but acquitted of rape. After spending a month in prison, he was ordered to check into treatment at VA facility in Topeka, though it’s not clear if he ever did.

In January the following year in Salina, a 14-year-old was babysitting even younger children when Muelhberg knocked on the door, asking if he could use the telephone. Brandishing a knife, he told her he was going to rob the house. He then tied up and gagged the young girl, locked her in the bathroom and began filling the bathtub with water. However, a car drove by and a panicked Muehlberg, thinking it was the girl’s parents, fled.

At trial, Muehlberg’s lawyer claimed that Muehlberg had gone insane at the time of the incident. Muehlberg’s wife, mother and psychiatrist testified for the defense. The jury found Muehlberg guilty, and he was sentenced to five years in prison.

Later in 1973, Muehlberg’s first wife divorced him. He had little contact with his wife or son from that first marriage thereafter. That same year, his mother and father moved back to St. Louis, where his father died of a heart attack soon after.

Upon his release from prison, Muehlberg attended classes at Central Methodist College and Central Missouri State University before moving to St. Louis in the late 1970s.

He married again in 1980. The RFT spoke to the woman, now in her 70s, who was married to Muehlberg for six years before divorcing him in 1986.

She describes Muehlberg as an unremarkable husband who was just “fine” as a father. He always had problems with authority at work, she says. He always resented having to listen to a boss. After their divorce, she says, he wasn’t particularly interested in spending time with his two children, who lived with her but also frequently spent time with Muehlberg’s mother. Muehlberg himself was rarely a presence in their lives.

“I got away from him,” she says. “And I was glad I did after I found out that he killed that guy later on.”

When told why exactly a reporter was calling inquiring about her ex-husband, she adds: “Now I'm really, really glad. I could have been dead.”