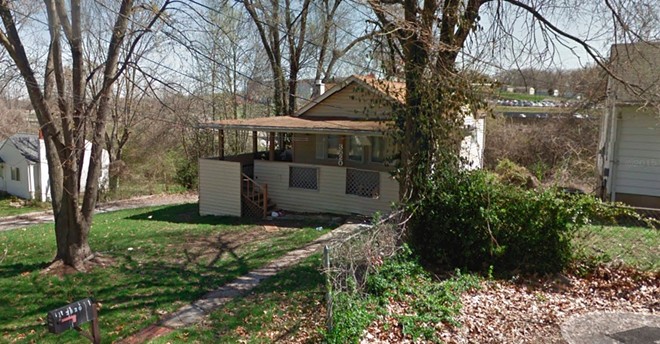 Google Maps
Gary Muehlberg's house in Bel-Ridge, which has since been torn down.

In February 1991, the same month that Muehlberg allegedly left Little’s body beside a highway in O’Fallon, Missouri, a fire destroyed a portion of Muehlberg’s home in Bel-Ridge.

The timing of the fire is significant. It occurred in the basement where Muehlberg almost certainly had been keeping the bodies of his victims, in some cases for several months, over the past year. And it likely destroyed important evidence.

In those years, Muehlberg was a regular at the Diner, a restaurant open 24 hours a day in Overland.

“It was your friendly neighborhood coffee shop,” says Larry Kennedy, a regular who got to know Muehlberg. “Aside from the people who went there at night.”

Another regular from that time said at night the diner became host to a “wild crowd” where people avoided telling each other their last names.

Muehlberg was part of the night crowd, Kennedy says.

Muehlberg stalked his waitress girlfriend, often posting up at the Diner for the majority of her shift, regulars say. When someone Muehlberg didn’t like came in to eat, Muehlberg would wait outside by his van, peering in until the person he disliked left.

“She was scared to death of him,” Kennedy says.

Deborah Layton, who frequented and later worked at the Diner, says that among the milieu of regulars, Muehlberg rubbed just about everyone the wrong way.

“Gary Muehlberg was crazy. He was always bringing women to his house. He was a very bizarre man. He had bizarre ideas, and he was dirty, like he never cleaned himself,” she says. “He kind of thought he was it, but no one really wanted anything to do with him. From what I learned later, he was picking up waitresses from Waffle Houses and places like that.”

Both Layton and the brother of a woman Muehlberg dated at the time say that Muehlberg often bragged about being an officer in the Freemasons and had a highly inflated sense of his importance. “He always talked about what a secret organization it was and that they helped children so nobody would ever investigate the Masons,” Layton says.

“He was more narcissistic than he was anything,” Kennedy says. Layton adds that Muehlberg was always hanging out with a man who openly displayed his gun and claimed to be a police officer, even though everyone knew he was a security guard. “A rent-a-cop,” Layton says.

Muehlberg had previously worked construction, but in 1993, the 43-year-old was telling others that he was in ailing health. Instead of manual labor, he sold marijuana and dabbled in buying and selling used cars. He later told police that he frequently kept considerable quantities of weed in his basement.

Layton says that in the early ’90s Muehlberg tried to recruit her husband into his burgeoning marijuana business. Muehlberg even showed her husband where he kept his stash. 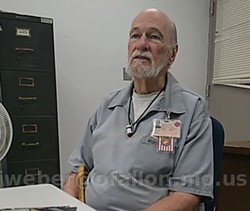 COURTESY PHOTO
Gary Muehlberg being interviewed in prison.
“He took him over to his house and showed him a false wall in the basement, and said, ‘I got all these bricks of weed. Do you want to help me get rid of them?’” Layton says.

“He was the type of guy who was always sniffing around, trying to make a quick buck,” says another diner regular at the time who asked his name not be used.

In February 1993, Muehlberg spread word around the Diner that he was trying to unload a 1989 Cadillac Fleetwood. Kenneth “Doc” Atchison, another regular, was interested in purchasing the car.

On February 8, Atchison told Kennedy and Layton that he was going over to Muehlberg’s house with $6,000 to buy the car.

Both Kennedy and Layton said they were worried about Atchison going by himself, as Muehlberg had always been a menace and was now involved in large-scale drug dealing.

But Atchison, 57, waved his friends off and headed over to Muehlberg’s house alone.

He was never seen alive again.

Muehlberg, however, showed back up at the diner later that same night, showing off a stack of newly acquired cash.

Atchison’s family filed a missing-persons report, but though Muehlberg was immediately a suspect, police waited to search his home.

In the following days, according to a 1993 police report, Muehlberg contacted at least two people and asked them to construct a plywood box made to his specifications. Investigators would later learn that Muehlberg used the makeshift box to store Atchison’s body.

Muehlberg remained in the house for a week with Atchison’s dead body in the makeshift coffin in the basement.

According to a 1993 police report, he then fled to Illinois, telling his “rent-a-cop” friend that if police searched his basement he would be “locked up the rest of his natural born days.”

From Illinois, he called friends offering them money to go to his house and pretend to do lawn work while checking to see if police were surveilling the premises. He offered one man, Jerry Akers, $20,000 to move the box containing Atchison’s body out of the basement. Akers declined. He asked another man to let his dog out and, while he was at it, move the box containing Atchison out of the basement. The man agreed to let the dog out but left the crude coffin alone.

Muehlberg was arrested one month later, on March 27, 1993. The deputy from the Wayne County Sheriff’s Department in Illinois had no idea he’d handcuffed a serial killer.

During interrogation in St. Louis, Muehlberg admitted to police that Atchison was dead in his basement, though he swore he hadn’t killed him. He began to cooperate with law enforcement, but only because he was trying to pin the murder on his boss at the construction company. Muehlberg insisted that he was being framed.

Prior to police searching his home, Muehlberg told detectives that he had built a “secret room” in the northeast corner of his basement.

“He advised that entry to the room could be gained by pushing on a drywall panel just inside the door leading from the basement to the driveway,” the police report says.

Muehlberg’s house near Endicott Park was leveled at some point in the past two years, but old photos show a forlorn-looking, vinyl-sided ranch far recessed from East Edgar Avenue. Its rear door led directly to the basement. A shoddily overbuilt front porch would have concealed whatever Muehlberg was doing from any prying eyes on the street.

Detectives searching the premises in 1993 found total disarray. Muehlberg had been sleeping on a foldout bed in the living room. Its sheets were soiled, and dirty clothes were strewn about everywhere. In the basement’s “secret room” they found Atchison dead, entombed in the hastily constructed wooden box. “A crude coffin” is how police later described it to the Post-Dispatch.

“They couldn’t get his whole body in there. His feet were sticking out,” Kerry Wisdom, one of the detectives who searched the house, tells the RFT.

Wisdom adds, “This guy must have been a pretty tough old guy because he had a rope around his neck. He’d been stabbed. And he’d been shot. They tried to kill him three different ways.”

Muehlberg had also secured Atchison’s hands in a pair of handcuffs. The car Muehlberg had claimed to want to sell to Atchison turned out to be stolen. After killing the prospective buyer and taking his $6,000 cash, Muehlberg sold it to his boss at the construction company.

During Muehlberg’s 1995 trial, the defense claimed he had been framed by his boss. The jury didn’t buy the implausible story, sentencing Muehlberg to life in prison without the possibility of parole.

Doug Sidel, the prosecutor who put Muelhberg in prison in 1995, tells the RFT through a court spokesperson, “We had no information tying him to other crimes.”

Nowadays, the name Gary Muehlberg doesn’t ring much of a bell at the Diner, which operates under a different name, even for some longtime regulars. The loved ones of those he killed, though, still remember. Atchison’s friend Kennedy recalls the moment in the Diner right before Atchison went over to Muehlberg’s house to buy the Cadillac.

“I told him to stand there and wait for me. I was in my work uniform, and I wanted to go up to the house and get a shower and change,” Kennedy says.

Atchison said he didn’t want Kennedy coming along. Kennedy says he realized years later that it was probably because Kennedy and Muehlberg were perpetually at odds.