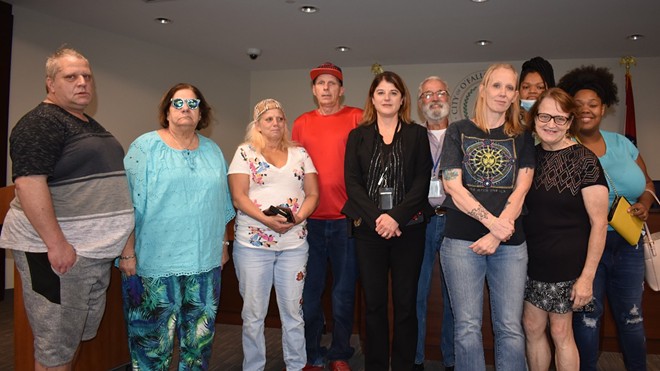 On August 5, friends and relatives of Robyn Mihan, Brenda Pruitt and Sandy Little gathered in a nondescript municipal courtroom in O’Fallon, Missouri, to find out who killed the three women 32 years ago.

Weber had arranged the private event quickly. The family members were only notified the day prior. No one knew for certain what police were going to say, beyond that they had good news. In chairs where trespassers and drunk drivers typically wait to have their infractions adjudicated, the dozen or so family members took seats.

“I wanted to give you guys some answers,” Weber said. “That’s what this is all about.”

Weber said that she’d be sharing the first name and a photo of the man who, though he hadn’t yet been charged, she was certain had killed Mihan, Pruitt and Little. She said that she had interviewed this man in prison twice and that during the second interview, he had confessed.

Several gasped at the word “confessed.”

Weber then asked those assembled to share memories of Mihan, Pruitt and Little.

Geneva Talbot, Sandy Little’s half sister, said that she hates that she never got a chance to really know her sister. “There was a big age gap. She was 20 when she died; I was just 13, a brat annoying her all the time,” she said.

“They were somebody’s sister, daughter, you know, my mother,” Talbot added. “Just because you have the devil on your back doesn’t make you a bad person. My sister was only 20. She could have gotten out of that situation and become an amazing person. We’ll never know.” More than anything, over the last 30 years, the family members had felt their loved ones’ absence.

Brenda Pruitt’s granddaughter, also named Brenda, said that the only things she knows about her grandmother are that she was petite and energetic, always up on her feet, going for early morning walks. She was also clumsy, a trait the younger Brenda inherited.

“And that’s about all I really know about her,” Brenda said. Mostly, they talked about how the murders impacted the families for generations. 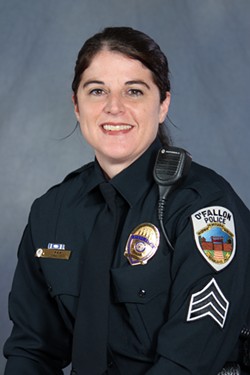 COURTESY PHOTO
Jodi Weber of the O'Fallon police department.
“I’m a paranoid person to this day,” Talbot said. “My six-year-old child knows that there’s bad people out there. And I’m teaching her that at six years old because there are bad people out there.” In the wake of his girlfriend’s death, Chris Day remained mired in addiction for decades, serving long stints in prison. Burgoon often visited Day when Day would get locked up. “He’d show me the picture of Sandy he kept with him. He’d say, ‘This isn’t what she’d want,’” Day recalled.

In recent years, Day has settled down, gotten his life on track. “Sandy would be proud of me,” he said.

He felt that her murder being solved would be an important step toward closure, though he was upset his son didn’t make it to the private meeting that day.

“What could he have more important than this?” he asked afterward. Saundra Mihan expressed gratitude to Weber and the other detectives, but she still held bitterness over how the Lincoln County Sheriff’s Department had treated her family in 1990. Lincoln County is where Muehlberg left Robyn’s body alongside a Missouri highway, and deputies told her that Robyn “was not murdered in our fair city. She was just dumped here.” That still smarts.

After everyone had a chance to speak, Weber displayed a photo of Muehlberg, and for the first time the families of Mihan, Pruitt and Little saw the face of the man who took their loved ones.

The group fell silent. The pain that had clung to the families for 30 years now had a face and a name — “Gary.”

The photo of Muehlberg showed him with a neatly trimmed, white goatee, a crown of short white hair around his bald head. He sat upright at the table where Weber interviewed him. He wore a drab prison-issue shirt.

Tommy Mihan asked if Gary was a St. Louis guy.

Weber said he was.

Weber, careful with what she could reveal at that moment, said truthfully he had addresses associated with him in both. Weber explained that Gary had been in prison since 1993 for murder. “What kind of murder was it?” one of the family members asked. The question had been awkwardly phrased, but there was no good way to ask it.

Weber explained that the 1993 murder had been different. The victim had been a man, someone Muehlberg knew, the motivation money. After the meeting, Day found himself struggling with complicated feelings. He was grateful to Weber, to Burgoon, to everyone who hadn’t forgotten about Little.

“But he ain’t going to do a day for this,” he said of Muehlberg. “He’s already doing life without. They can’t give him anything else.”

“But at least he ain’t going to hurt no one,” Day’s girlfriend, Jackie, added.

Day was convinced he recognized Muehlberg from crossing paths with him during a stint in state prison.

After the meeting, Little’s stepsister Barb Studt said, “When it’s all said and done, Sandy’s killer still gets to eat meals, watch TV, read, make friends if you can do that in prison. But he hasn’t suffered, and I don’t know if he will ever suffer enough for robbing the lives from these girls and causing the cascading traumas of the children left behind.”

Talbot says she was sick when she saw Muehlberg’s photo. “I was disturbed that he looked so average. Like a grandpa,” Talbot recalls later. “That face will forever be in my head. I hate his face, and I only saw it for five minutes. Knowing he took the lives of these young women without a piece of remorse. There’s no way he could feel remorse. He’s lived with this just fine for 32 years. I don’t think he ever had a real desire to confess. He just couldn’t deny the hard evidence. I hope he gets death for this. It won’t bring these women back, but an eye for an eye. He deserves no less.”