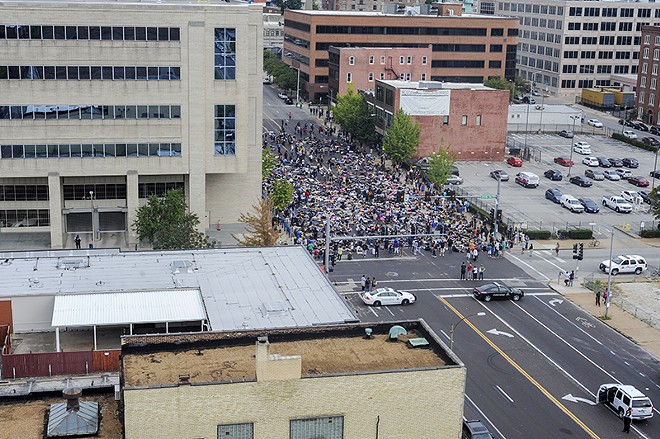 The protesters filled the streets, chanting and leading a die-in, while police officers watched from a distance. Olive was shut down from 18th to 20th streets during the hours of demonstration.

The action was entirely without incident for its two hours in front of the police building, which is located at Olive and 20th Street. At one point, protesters were still for six minutes of silence — noting that it's been six years since Anthony Lamar Smith was killed by then-St. Louis police officer Jason Stockley. Stockley's acquittal Friday has kicked off days of protests (see here, and here). 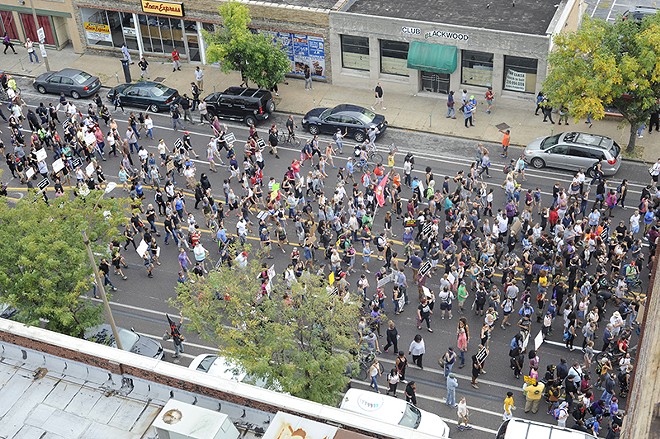 PHOTO BY KELLY GLUECK
RFT staffers who went to the roof of the paper's office at 21st Street and Locust were surprised to discover snipers camped out there. (The RFT is just one of many tenants; the officers told our photographer that they had the building owner's permission.)

At any rate, the gunman were polite to the photographer who joined them. 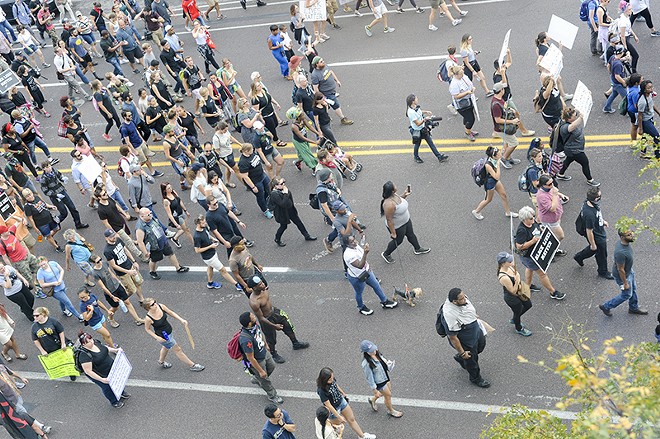 PHOTO BY KELLY GLUECK
The RFT's Doyle Murphy shot the video below as the protesters headed from downtown towards Midtown, taking a few quick maneuvers seemingly designed to outwit (or at least get ahead of) police officers as those assembled marched to Chaiffetz Arena.

Then they marched through the campus of Saint Louis University.


Stopped by a police line at Grand and Forest Park, protesters changed course. They remain on the march. Police seem willing to let them have the streets, but are not letting them get on the highway. 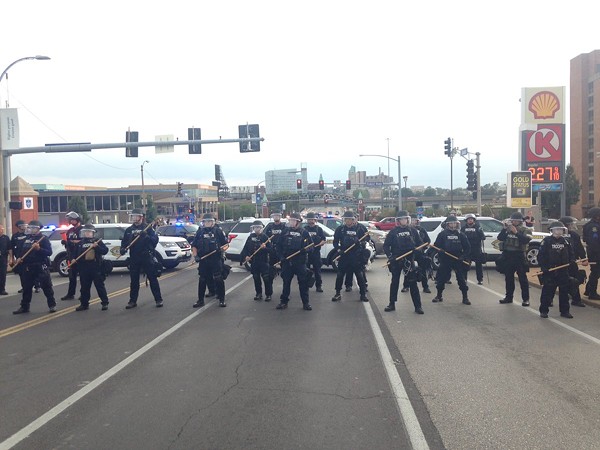 On the SLU campus, the protesters reportedly got a warm welcome from a few local Jesuits.

There was a tense moment with folks & police w/ batons & visors. Leaders pulled protesters back. Now handshakes in street from SLU priests. pic.twitter.com/05qATqF7da


After their journey through SLU, the protesters then circled back to downtown, as shown in this video by the RFT's Danny Wicentowski, shot at the roof of the RFT's building at 21st Street and Locust.

The video shows a protest that stretches for blocks:


The protest largely finished by 8 p.m. The crowd began to disperse, without hundreds going home. Only a hundred or so people continued to march, heading east further into downtown.

It was at that point that some agitators broke windows on Olive.

RIGHT NOW in Downtown: they have warned us tear gas could be deployed. People are driving around walking their dogs. pic.twitter.com/37F4NrCfyl


At 8:50 p.m., police gave official orders to disperse. "This is no longer a peaceful protest," they tweeted.

We have reports of significant property damage in Downtown #STL. Will update soon. #STLVerdict


Police giving order to disperse immediately at Tucker and Pine. This is no longer a peaceful protest. #stlverdict

Officers in personal protection gear have arrived on the scene in Downtown to disperse unruly crowd. #STLVerdict


Police say they have made multiple arrests, and warn that commuters downtown may face "delays and temporary street closures."

Criminals have caused serious property damage in the downtown area. This destruction will not be tolerated. #stlverdict pic.twitter.com/qNl2VwTVmp