Huge Surge in Concealed-Carry Applications in St. Louis County, Averaging Over 700 a Month

The number of people seeking concealed-carry permits has jumped in St. Louis county -- by a lot.

In St. Louis and across Missouri there's been a lot of talk about concealed-carry permit holders in recent weeks. Statewide, a debate has erupted about the privacy of concealed-carry applicants, and in St. Louis county, a recent investigation into an allegedly fraudulent gun instructor has also sparked some controversy.

In our reporting, Daily RFT has stumbled upon some interesting stats. In St. Louis county, officials this year are processing an average of 700 concealed-carry permit applications a month. Seven years ago, the monthly average was around 90.

What's the cause of this huge spike?

It can be difficult to speculate, though when there is talk of gun control and new gun laws across the country, there can be increases in gun sales, permit applications, trainings and more.

What's interesting about the county data is that there has been a rapid increase in recent months -- and a gradual rise over the last half-decade. 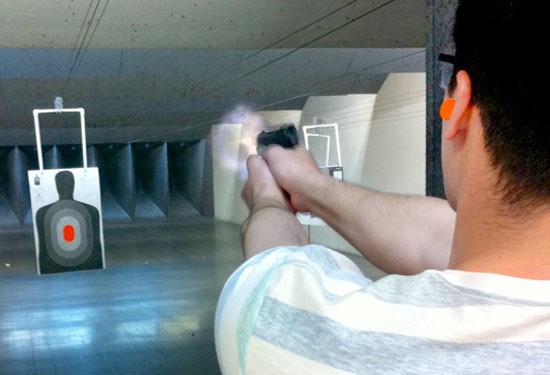 "Since last October, November, they've really gone up," St. Louis county police spokesman Randy Vaughn tells Daily RFT. "But they were rising prior to that."

The numbers could be tied to the media attention around tragedies like the Newtown elementary-school shooting last December, but that wouldn't explain the overall trend since 2005.

Here is some basic data that county police recently sent us:

Clearly, there's been an overall increase since 2005, with a noticeable jump last year into this year. With about 5,000 applications total last year, that would average roughly 400 per month -- almost half the current rate.

Regardless, it seems clear that 2013 is on track to break recent concealed-carry permit records.

This week, county police had to address questions concerning more than 1,000 concealed-carry permit holders who got their required certificates from a gun instructor facing fraud charges.