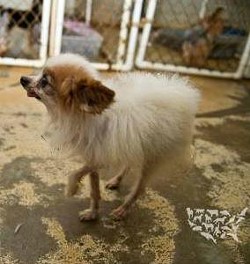 Three years after Missourians voted to crack down on disreputable dog breeding operations, the Show-Me State continues to lead the nation in the number of dangerous and unsanitary puppy mills.

"It's definitely disappointing for Missouri considering that voters passed a law only for lawmakers to overturn many of the key provisions of the measure," says Kathleen Summers, director of outreach and research for HSUS's puppy mill campaign.

The HSUS report cites multiple violations that inspectors uncovered when visiting Missouri breeders. The list of grievances includes finding malnourished canines, dogs that apparently underwent surgery without a veterinarian and animals housed in general squalor and filth. In a visit to a breeder in northern Missouri federal inspectors wrote of odor so strong they experienced a "burning sensation" in their noses. In inspections of other facilities, agriculture officials repeatedly noted dogs so thin that their ribs and vertabrae poked through their coats.

In November 2010 Missouri voters narrowly passed the "Puppy Mill Cruelty Prevention Act" aimed to curb the number of unlicensed and shoddy dog breeders operating in the state. A month later, state legislators went about dismantling the act, removing limits on the number of dogs breeders are allowed to keep as well as guarantees that would have provided that dogs inside breeding facilities have generous space to move about.

Lawmakers also removed the term "puppy mill" from their legislation, choosing instead to call it the "Canine Cruelty Prevention Act." Still, the watered-down act -- which Gov. Jay Nixon signed into law in 2011 -- has some bite to it, allowing the Missouri attorney general to sue breeders for past violations. Records show that Attorney General Chris Koster's office has taken action against at least a half-dozen Missouri dog breeders since passage of the act.

Today Missouri is home to 881 commercials breeders, according to the Missouri Department of Agriculture. That's hundreds fewer than existed in just 2009. Moreover the department now has 15 inspectors who last year made a record 3,460 inspections.

Yet more can be done, says Kathleen Summers at the Humane Society of the United States. She notes that Missouri's canine cruelty prevention act limits civil penalties for breeders at $1,000 per violation. Breeders who repeatedly ignore the law can be charged with no more than a misdemeanor.