SLMPD
Piles of tires as they appeared in police photos of an illegal dumping site in north St. Louis.

On February 2, a green pickup truck loaded with tires stopped in an alleyway in north St. Louis. As a police surveillance camera rolled, two men began unloading the unwanted cargo, adding them to the haphazard piles that stretched along both sides of the alley.

"There were easily a couple hundred tires here," Detective Vince Stehlin said Tuesday during a press conference at the head of the alley. Behind him were parked three bright orange trucks from the city's Street Department, a sign of the sort of effort it takes to clear a well-used illegal dumping site.

The two men in the green truck, identified by police as Jonathan Fisher and Mark Santanello, are now facing 26 charges, including multiple counts of illegal dumping in the alley of the 4500 block of Maffitt Street in the Ville neighborhood.

The duo allegedly used the out-of-the-way spot on seven occasions. The alleyway is bordered by several boarded-up properties, and so it made for a perfect spot for the pair to leave trash, Stehlin said. SLMPD
Caught on police camera in February, a two-person team of trash dumpers unloads tires into an alley.

"There's no residents on that side of the street," the detective noted. "That's what we usually rely on the community to report this stuff, and there aren't any residents to report them. They just found a good spot where you can kind of circle around and not be detected."

Overall, Stehlin said it's difficult to pinpoint a pattern in the city's illegal dumping. While the city's Environmental Investigation Unit — also known as the Trash Task Force — investigates hundreds of incidents every year, he estimated the geographic breakdown as a "50-50" split between busts against trash-haulers in the city and St. Louis County.

According to the St. Louis City Counselor's Office, 144 summonses have been issued this year related to illegal dumping. Although the charges are municipal citations, the punishment per charge can include three days in jail, a $500 fine and community service.

Central to the Trash Task Force's work is a network of some 200 surveillance cameras. During the press conference, Mayor Lyda Krewson praised the task force for improving the city's quality of life and helping the area's residents.

"Trash begets more trash," she said. "When you have hundreds of tires dumped behind your house or dumped in your alley, that's way too big for any individual to take care of."

But even when the city intervenes, the trash persists. City work crews have returned to the alley multiple times since February, each time finding new bags of trash and other dumped items. On Tuesday, the alleyway featured discarded children's toys and a busted amplifier.

"Alleys tend to be a bit anonymous," Krewson noted. "It's not like the trash in front of your house, where people think perhaps, 'Oh, somebody else will get that.' And in fact, somebody else usually does. But it's a major challenge."

The city's Citizens' Service Bureau accepts reports for illegal dumping sites — and offers a $100 reward for any complaints that lead to convictions. 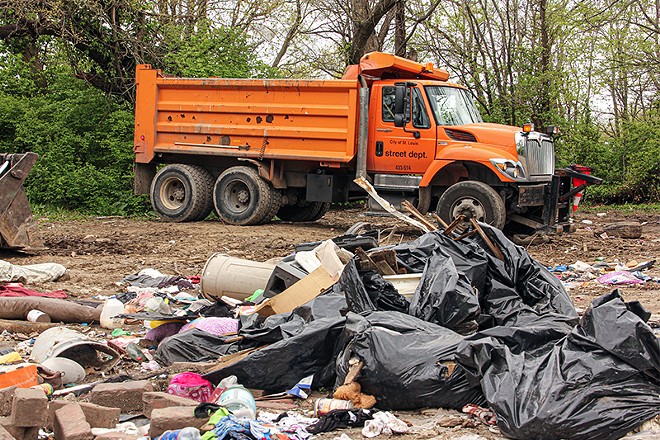 DANNY WICENTOWSKI
During a visit April 13, the alley isn't covered in tires, but it's clear people keep bringing their trash here.