Two FBI agents took the stand this morning in the fourth day in the trial of Tim Norman, the former reality TV star accused of orchestrating the murder of his nephew Andre Montgomery to collect a life insurance policy he’d taken out on the 21-year-old.

Norman and Montgomery were co-stars on Welcome to Sweetie Pie’s, a reality show set in St. Louis that ran for nine seasons on the Oprah Winfrey network.

On March 14, 2016, Montgomery was gunned down outside a home recording studio on Natural Bridge Road. Four years later, police arrested Norman on charges of conspiracy to commit murder. Until that point, Norman had publicly played the part of grieving uncle.

U.S. Attorney's Office
The house on Natural Bridge outside of which Andre Montgomery was killed.
This morning on the stand, FBI Agent Bastian Freund testified about location data pulled from three cell phones belonging to Norman. Two of the phones were registered to Norman and one had “no subscriber,” meaning it was a so-called burner phone.

Ellis, an exotic dancer from Memphis, testified that she initially met both Montgomery and Norman while working as a stripper in East St. Louis. She told the jury that Norman paid her $10,000 to lure Montgomery to his death.

Text messages between Ellis and Norman, sent the morning before Montgomery’s death show Ellis meeting with Norman at Norman’s room in the Chase Park Plaza.

About an hour after meeting Norman in his hotel room, Ellis texted Montgomery, “What’s up trying to see you before I leave.” 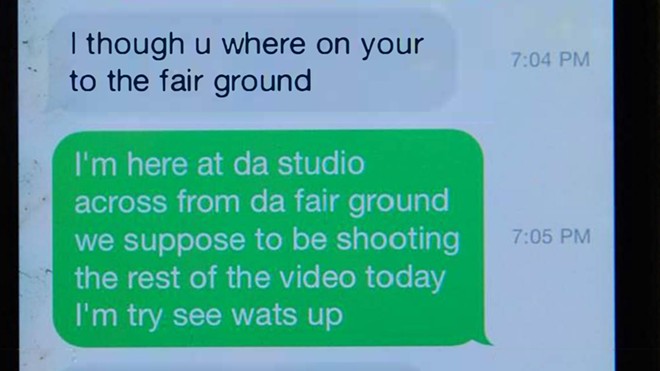 The final text in the thread was sent around 7 p.m. when Montgomery texted Ellis an address on Natural Bridge Road, across from Fairground Park, the place where he would later be killed.

During his cross examination of Ellis, Norman's defense attorney Michael Leonard implied that she was lying in order to receive a lighter sentence after pleading guilty to her part in the alleged conspiracy.

This morning, a second FBI agent took the stand after Freund.

Yesterday Hill testified that Norman paid him $5,000 to shoot and kill Montgomery after Ellis lured Montgomery out of the recording studio.

Leonard attempted to damage Hill's credibility by getting him to concede he was on ecstasy at the time of the shooting.

Hill responded, "I'm always on ecstasy," according to the Post-Dispatch.

Today, Wood testified that on March 4, 2016, 10 days prior to his death, Montgomery traveled from Dallas to St. Louis. Two days later, a man named “Big Ed” texted Norman, who was living in Los Angeles, photos of Montgomery at Sweetie Pie’s in St. Louis.

On March 13, Norman flew from Los Angeles to St. Louis, landing at Lambert a little after midnight on March 14. Later that day, Montgomery was killed.

Earlier in the week, the jury heard testimony from employees of the various insurance companies Norman tried to use to take out policies on his nephew.

The insurance professionals said that many of the policy applications contained red flags, including the unusual dollar amounts being applied for. In one case, Norman tried to take out a $249,999 policy on Andre.