People have got to know whether or not their President is a crook. Well, I'm not a crook. I've earned everything I've got." 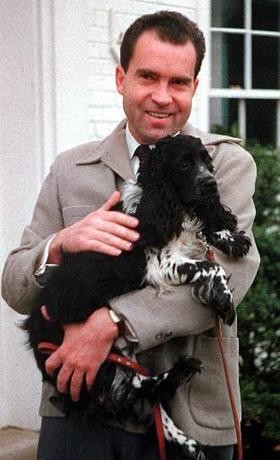 dogguide.net
A survivor at any cost, Richard Nixon, our most famous political Grendel, would of course do and say anything to save his shameless hide. Anything. On this day in 1952, Nixon used the family dog, a cute little cocker spaniel named Checkers, to ensure that his rapid Red-baiting rise in American politics would not come to a crashing halt.

Several days after Dwight Eisenhower tapped Nixon as his running mate, a sensational story appeared in the New York Post suggesting that Nixon had personally profited from a secret, though legal, political slush fund, in the amount of $18,000. Outrage and shock ensued, with many Republicans urging Ike to tell Dick to take a hike.

So here's how Tricky Dicky played it:

Looking to cast himself as an Everyman, the California senator went to a Hollywood theater, where TV ad men had built a middle-class-looking living room for him to make his case to the American people. On the evening of September 23, some 60 million people tuned in on TV and radio to hear what would, forever more, be known as Nixon's "Checkers Speech."

Nixon said very little about the slush fund, preferring instead to ramble on about his modest beginnings, the 1950 Oldsmobile he drove, the two houses with mortgages, and how he was still paying off a $3,500 loan from his parents.

Then, with pure Nixonian flair, young Dick really laid on the syrup. With his wife, Pat, (she, who wore "the respectable Republican cloth coat"), sitting stoically by, Nixon put his political career in Checkers' paws.

A man down in Texas heard Pat on the radio mention the fact that our two youngsters would like to have a dog, and believe it or not, before we left on this campaign trip we got a message from Union Station in Baltimore, saying they had a package for us. We went down to get it. You know what it was?

It was a little cocker spaniel dog, in a crate that he had sent all the way from Texas, black and white, spotted, and our little girl Tricia, name it Checkers.

And you know, the kids, like all kids, loved the dog, and I just want to say this, right now, that regardless of what they say about it, we are going to keep it.

The speech was a triumph. The next day, Eisenhower asked Nixon to come to West Virginia where he was campaigning. He greeted Nixon at the airport with "Dick, you're my boy." The duo went on to a landslide victory. 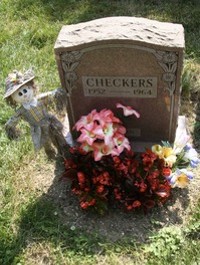 Checkers died at the age of 12 in 1964 and was buried in Long Island's Bide-a-Wee Pet Cemetery. Nixon, perhaps still reeling from his bitter loss in the California governor's race two years before, never visited Checkers' final resting place, nor did any other member of the Nixon clan.

It is said that the dog's final words were: "You won't have Checkers to kick around any more."

Editor's note: Historians have recently examined frame by frame footage of Nixon's Checkers speech and found that present in a small quantity of the footage was veteran newshound -- and current RFT managing editor -- Ellis Conklin. 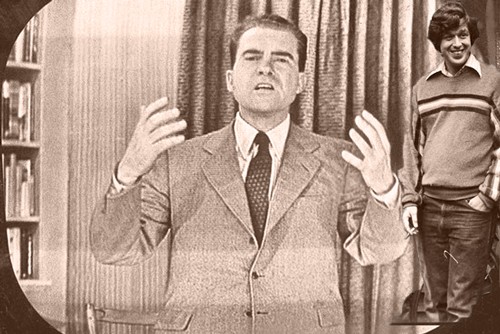