In St. Louis "Remake" of Bud Light Super Bowl Commercial, Nothing Goes According to Plan 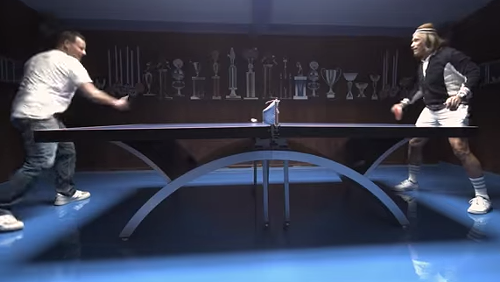 Bud Light on YouTube
Are you up for whatever happens next?

Remember that Bud Light commercial from the Super Bowl?

No, not the cute dog who befriends a Clydesdale. The Bud Light commercial, where an unsuspecting dude goes for a highly orchestrated and totally random night out with Reggie Watts, Don Cheadle, Arnold Schwarzenegger, a bunch of twins and a llama.

Well, what if the evening hadn't turned out well? What if nothing had gone as the production crew planned?

That's the idea behind Adam Huber's parody commercial for Bier Leicht, the perfect beer for when what happens next, isn't what you wanted.

"We just knew even before the Super Bowl teasers were revealed that the agency that came up with that commercial was pretty much setting themselves up for trouble," says Huber, who works in St. Louis as a commercial cameraman and director. "It's always fun to poke fun at stuff we see on TV all the time that wears us down. How could we not?"

So Huber called together a few buds, convinced the Fortune Teller Bar on Cherokee Street to let him take over for a few early-morning hours and shot a spoof commercial for his YouTube Channel, Parody Patrol.

(In case you were wondering, Huber's the one in the control room with headphones and a beard.)

"We knew we had to make this epic production go terribly awry," Huber says. "What better way to do that than with some scintillating slapstick?"

Bier Leicht's commercial starts just like Bud Light's: with a hot girl handing a beer to an "unsuspecting guy" and asking, "If I give this to you, are you up for whatever happens next?"

In Bier Leicht's commercial, everything goes downhill from there. The limo gets stuck in traffic. An ex-girlfriend makes an unexpected (and painful) comeback. The rushed finale goes perfectly wrong.

It's all worth a hearty chuckle, which is good because Huber wants to put out a new parody video every few weeks. Here's our favorite:

"There are a lot of creators here in St. Louis," Huber says. "People are friendly and willing to participate. There are going to be more videos."