In the Midst of St. Louis' Opioid Epidemic, a Rescue Mission

Missouri is on pace for a record number of opioid overdose deaths, and St. Louis is at the center. ERIN MCAFEE

The early evening sun is fading by the time Pamela Paul reaches the end of Garfield Avenue, just west of Vandeventer Avenue, a couple miles north of downtown St. Louis.

This is a corner of town tourists never see, a place of empty buildings and trash-strewn vacant lots.

Here, people — some unhoused — come to hang out, socialize, chill. Street drugs are easy to find.

The leader of a nondenominational Christian church in a nearby neighborhood, Pastor Pam walks in the company of a church friend, Elder Kenna Sykes-Harper.

Pastor Pam is on a crusade — to eliminate fentanyl, a powerful synthetic opioid painkiller that's mowing down lives nationwide at a record clip.

Like all great evangelists, she takes her message to the streets, meeting people where they are: at car detailing shops, grocery and liquor stores, street corners where people are using or looking to use.

Pastor Pam hands out the black bags, each containing a box of Narcan, the drug that reverses an overdose from opiates, especially fentanyl, which is up to 100 times more powerful than heroin.

In a gentle voice that is both sincere and adamant, she urges everyone she meets to keep Narcan on hand for emergency use. And she reminds them of Missouri's recently passed good Samaritan law, which provides legal immunity to those who call 911 to report an overdose or who administer Narcan to overdose victims.

"I couldn't save my son," she says. "But they can save somebody."

Pastor Pam describes the driving force behind her mission as her own life experiences, including the fact that both her parents used heroin for many years, leaving her grandparents to raise her.

In addition to her son Brian, she's lost a brother and nephew to fentanyl overdoses.

"I understand about forgiveness and redemption, you know," she says, adding that she herself was addicted to crack cocaine as a University City High School student in the early 1980s.

Here on Garfield on this warm July night, people are in the street shooting off bottle rockets, which explode with a loud pop. The air smells of gunpowder. Smoke drifts everywhere.

Pastor Pam and Sykes-Harper meet up with a young woman named Shameeka Brown. The women talk, and then, at Pastor Pam's urging, all three pray together.

"It's a wonderful thing," Brown says of their group prayer. "I stay prayed-up."

I ask Brown if she is high right now on fentanyl. 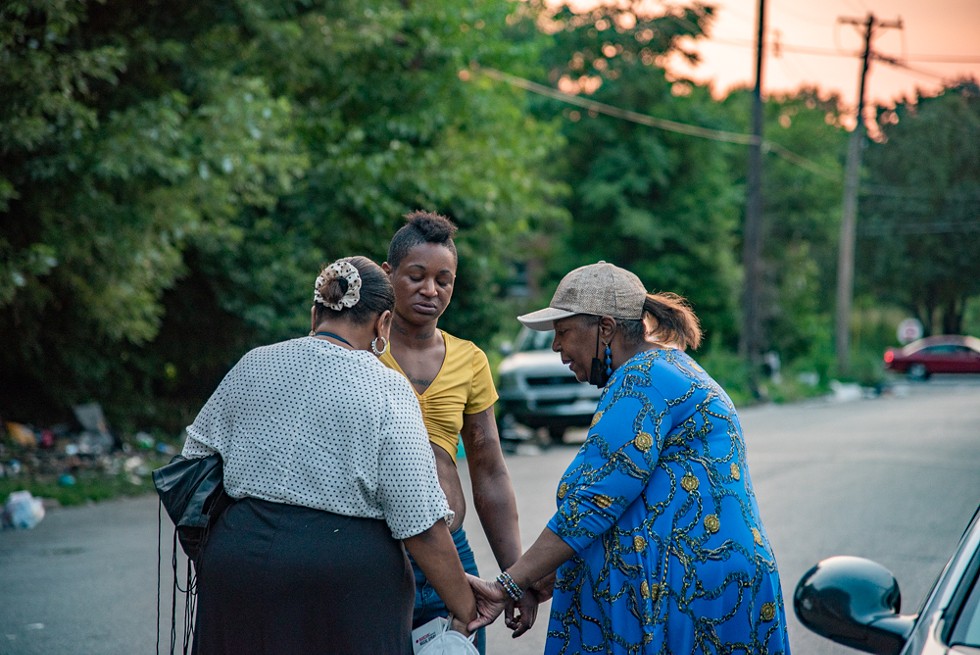 Pastor Pam and Sykes-Harper slow their gait as they draw closer to a tiny woman in an oversized wheelchair parked next to a vacant lot piled high with garbage.

Pastor Pam stops a few feet away from the woman, holds up the nylon bag and pulls out a Narcan box.

Pastor Pam leans in to the woman, who seems almost birdlike in her frail smallness.

The woman in the wheelchair identifies herself as Tonya. She reveals she's been homeless for nearly three years. And yes, she daily injects fentanyl into her body, she says.

Two empty blue syringes lay on the ground a few feet away next to some plastic bags.

"And so we heard that you overdosed a couple times, right?" Pastor Pam says, holding up the Narcan box. "You know what the Narcan is, right?"

"And so you're going to tell somebody, 'Look, I got my Narcan, and if I'm getting high or not, if I go down, don't you leave me down here. Bring me back. Period.'"

Pastor Pam lets that sink in a moment.

"But there's treatment for you, all kind of stuff," she says. "I can get you whatever you need to turn this thing around if you want some help."

ERIN MCAFEE
Boxes of Narcan are part of the care packages handed out in the community.

I ask Tonya how she got started with fentanyl.

She tells me she transitioned to it after the local supply of heroin had dried up early on in the pandemic last year.

I ask her if she's afraid of dying from an overdose.

"I'm not afraid of death at all," Tonya says. "Because I believe in God. But I don't want to be part of a statistic in killing myself."

Pastor Pam promises to find a treatment center for Tonya.

"If you can hang on 'til Monday, I'll be here for you," Pastor Pam says, and then leans in closer.

"All right. You deserve that."

A few minutes later, while walking back to their car, a 2004 Chrysler Concord sedan, Pastor Pam says to Sykes-Harper, "She said she was 38. My Brian would've been 38 this year."