In Wash U's shadow, 3 St. Louisans Struggle at the Corner of Hope and Despair

They fly the sign and hustle for a place to lay their heads. These are their stories THEO WELLING
From left: Kayla, Keith and Sherry have been working at the intersection of Forest Park Parkway and Skinker Boulevard for years.

Keith* has been working the intersection of Skinker Boulevard and Forest Park Parkway for longer than most of the college kids who attend Washington University, just across the street, have been alive. He's been there — off and on, depending on whether he can land another job — for more than 20 years.

Even during the months he's unemployed, which is more and more often these days, Keith works a longer day than most cubicle-dwellers. He walks the intersection — east-west, north-south, with little regard to traffic signals — for nearly 12 hours each day, sometimes more.

At night, he'll sometimes pay $16 for a boarding room just north of here. Other nights, he'll find a corner to curl up in, a place he feels safe, often near Skinker.

In his left hand, Keith holds a cardboard sign — "Just Hungry, please help, Lost everything God bless u to bless others" — scrawled with a black Sharpie. Keith's right hand, missing a middle finger, goes from forehead to hip, as he salutes drivers in time with his march.

Keith is one of a handful of people who frequents the intersection. Across from a private university that costs more than $70,000 annually to attend, and in front of a coffee shop selling $8 egg bagels, is a group of people who often have less than $50 to their name at any given moment.

Not everybody wants them here; some people call the cops. Yet they're adamant that this intersection in St. Louis is the best place for them to be.

Sherry travels nearly an hour by train every day to fly her sign here, even though she needs a walker to move around comfortably. Like Keith, she's been working here for two decades, watching as coffee shops come and go and the ramen restaurant replaces the pizza joint, which replaced a different kind of noodle shop years before. The intersection changes; their situations in many ways have not.

Kayla is newer to this intersection. When Sherry and Keith got started here, she was just a child, not even 10 years old. Now she's a regular, too. She stands on a corner, watching cars pass her by. Some days, she only makes a few bucks in an hour.

Some locals know Keith, Sherry and Kayla by name. Even more know them by description, or feel a pang of familiarity when they see their faces. Most don't know their stories.

Keith's story began only a few miles away, across a street that in St. Louis has become a symbol of divide. He was born in north St. Louis, and grew up there in the '70s as the baby of eight other siblings. In 1982, when Keith was nine, his 15-year-old brother Andre was shot and killed.

"My mom said, 'Well, I've lost one son, and I'm not gonna lose another one,'" Keith says. She moved Keith and his siblings to Northern California. 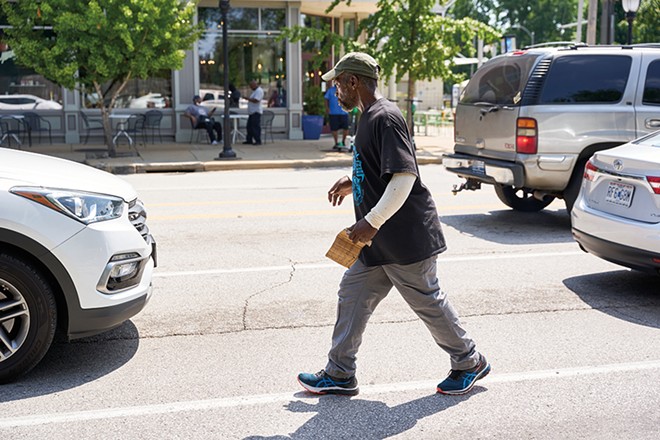 THEO WELLING
When he's working, Keith doesn't stop moving. He approaches cars methodically, sometimes stopping to chat for a minute with a driver and collect a few bucks before moving on to the next vehicle.

At 14, looking for cash and hanging around an older crowd, Keith became a "street pharmacist," selling drugs.

"I didn't have no money, so any money is good money," Keith says.

At 18 or 19, Keith realized he had to get out. He flew back to St. Louis, where he had family. His niece picked him up from the airport with her friend.

Keith and the friend hit it off. "We had a little crush on each other," he says. "She was the perfect woman. Anything you'd ever want in a woman, that was her."

When Keith was 26, they got married and had two kids. Their son is now 27. Their daughter is 24 and moved to Texas with her mom when Keith and his wife got divorced. Keith says neither of his kids fully know his situation, and he wants to keep it that way.

"My son, he has his own family. I don't ask him for anything. He's about to get married, and he has a daughter," Keith says.

Keith fits the profile of many unhoused people in the neighborhood: an older Black man, grizzled by years of being outside in harsh Missouri weather. In St. Louis, Black citizens are nearly four times more likely to be unhoused than white ones.

In the past, Keith's had some steady construction work, which at one point allowed him to afford a studio with a kitchenette. He says that once he lost his middle finger to an infected brown recluse bite a couple years ago, he hasn't been able to work like he used to. Thick scars run from his wrist to his elbow after doctors cut clear to the bone to clean out the wound.

"The last job I had was a year and a half, maybe two years ago," Keith says.

Two decades ago, a friend of his, a white guy with knowledge of the area, brought him to this corner. When Keith needs money and isn't working, he'll come back. He's relatively comfortable here, knows the pattern of the lights and knows the people.

At one point, Keith snaps his fingers at another man sitting in the shade of the Metro sign a few feet away. "Chris!" he calls.

The man walks over, wordlessly pulling a chunk off the chicken sandwich he's eating and hands it to Keith, who hungrily stuffs it in his mouth.

Every couple of minutes, Keith nods off, neck sloping downward and eyelids fluttering shut. He'll stay that way for a few moments, then snap back upright, looking expectant but saying nothing. 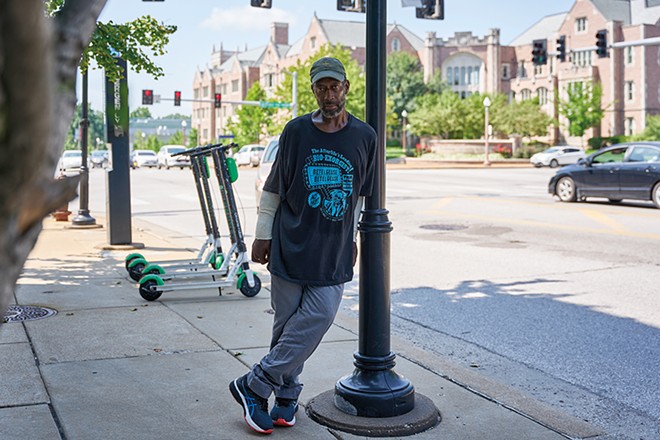 THEO WELLING
Keith leans against a lightpost at the intersection of Skinker and Forest Park Parkway. Washington University is directly across the street.

Keith says it's because he doesn't sleep much. He got two hours last night in the underground Skinker MetroLink station. "You wake up at every noise, every five minutes," he says.

A former team leader at the Kaldi's coffee shop on the corner, Jonah Walker, says that one of his first interactions with Keith was a few years ago, when Keith was found asleep outside the store. Walker was unable to wake him up easily and ended up calling emergency services.

"We weren't sure if he was going to be OK," Walker said. "It was a scary experience."

When Keith isn't sitting or napping, however, he's working hard. He marches, with a distinct jaunt, relentlessly, even on the hottest of summer days. By 11 a.m., his white, long-sleeve shirt is soaked with sweat.

Molly Roberts, who lives in the surrounding neighborhood with her partner Dylan Welsch, says they've seen Keith and other unhoused people for years.

"It's almost like any other acquaintance in your daily life," Roberts says. "This is their neighborhood, and they've been here for a long time and often know the neighborhood so much better than I do or anyone walking around seems to."

Welsch says he's noticed that most people try not to acknowledge the area's unhoused denizens. In the Midwest, where friendly greetings to strangers are commonplace, the silence toward people on the street stands out. 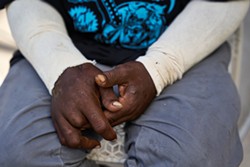 THEO WELLING
Keith lost the middle finger on his right hand after he was bitten by a brown recluse spider while cleaning out a closet. The bite became infected down to the bone.

Keith says, however, that eye contact isn't the most pressing issue on his mind. He's more worried about outright aggression from passersby.

He hears racial slurs. He hears "Go get a job!" even more. Sometimes, he says, people even try to spit on or hit him.

When he first started coming to the intersection, Keith could make $60 to $90 in a day. Now, with more people showing up to fly signs each day, he collects only about $25 to $30.

Keith says the owner of the boarding house he frequents has been talking about raising the price to $22 per night, which would eat up well over half a typical day's earnings.

Despite all this, Keith is here to stay. "St. Louis has to be the most feasible place for me, economy-wise," he says.

Yet ideally, he's not at this intersection forever.

*To protect their privacy, we are only using our source's first names.