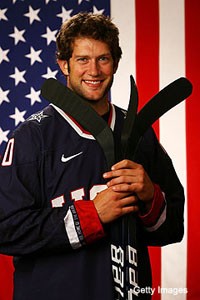 As such, these shirts -- spawned by the folks over at hockey blog Puck Daddy -- are now more appropriate than ever. They went on sale late last month for $17.95.

Unfortunately, they seem to be no longer available on retail Web site Zazzle.com, where they were originally hawked.

"It's no longer on the Web site. They took it down. When that happens, it's no longer available to be sold," says a customer service rep for the site. (Know where we can find more of them? Send us a tip!)

As a clever take on the Inglourious Basterds movie of last year, a few writers have already taken to Backes' patriotic gusto. Leading up to the Olympics, the 25-year-old Blues forward got into on-ice fights with three members of the Canadian team in a two-week span: Jonathan Toews of the Chicago Blackhawks, Corey Perry of the Anaheim Ducks and Rick Nash of the Columbus Blue Jackets.

While eye-catching, this shirt may be a little too on the nose, though. Backes broke Swiss player Julien Sprunger's neck on a big ol' hit last year, and according to Sprunger, Backes reminded him that it could happen again if Sprunger doesn't watch himself.
Backes and the U.S. Team defeated Switzerland 3-1 on Tuesday night, and next play Norway at 2 p.m. Thursday.

Here's the full schedule for the U.S. Men's team during the Winter Olympics.

And if you haven't seen it in a while, here's the incredibly hard hit Backes put on Julien Sprunger during the IIHF World Ice Hockey Championships 2009 in Sprunger's home of Switzerland.