Inside the Race for Board of the Aldermen President 2019

Jamilah Nasheed and Megan Green want to disrupt St. Louis. They'll need to beat Lewis Reed, and each other 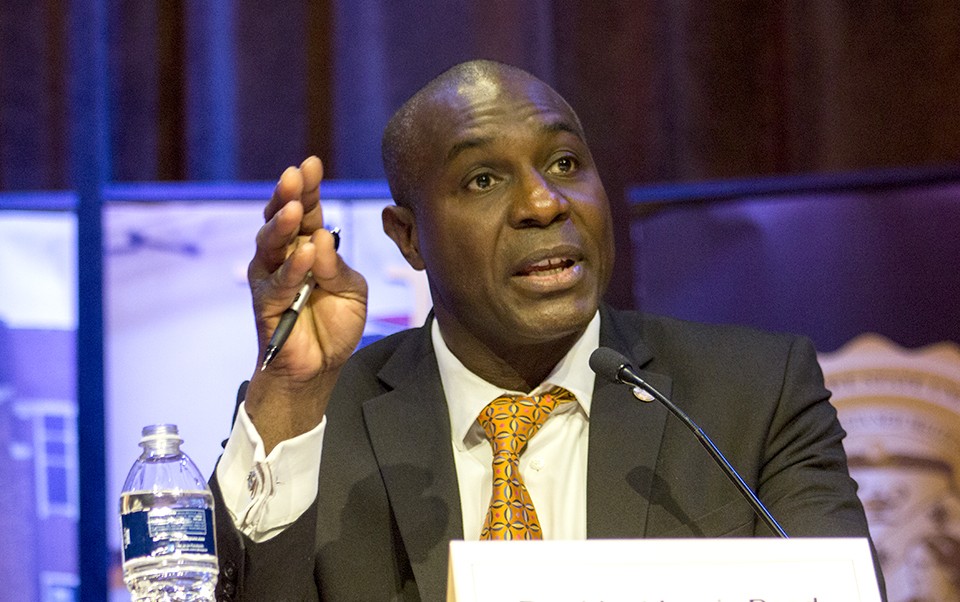 DANNY WICENTOWSKI
Board President Lewis Reed has held his office for twelve years.

Lewis Reed declined to be interviewed for this story. Claiming that the RFT's past coverage lacks "balance," Reed suggested that he would not participate if the story revisited the details of his appearance on Romanik's radio show. (He also tried to push for a guarantee we'd reference the fact that Green once used the phrase "calling a spade a spade," which he has long maintained was a racist reference to Alderman Moore, a charge Green denies.)

Reed may have stumbled into the Romanik scandal, but it's also true that his three terms as board president rank among the longest tenures of any elected figure at City Hall. A fourth presidential term would be unprecedented.

Former St. Louis Mayor Francis Slay was elected board president in 1995 but only served a single year of his second term before leaving the presidency for the mayor's office.

"I loved being president," Slay says during a recent interview at his law office. "You have a tremendous amount of influence. You get a citywide pulpit for anything you want to talk about. And at the same time, you're not the mayor."

The board presidency, he says, requires deft management of relationships as well as policies. It also has the luxury of the leverage supplied by wielding one of three votes on the Board of E&A. With just three players on the board, the president is at all times only one alliance away from controlling the approval or denial of all city contracts.

But being a good president is not about power, insists Slay. He frames the position in terms of "influence and relationships."

Around Slay's office are mementos from those relationships: plaques, honoraria, commemorative shovels and bricks from ribbon-cutting ceremonies, signed photos with celebrities and athletes.

On a side table sits a chessboard. The spaces bear the signatures of grandmasters who participated in one of Rex Sinquefield's chess tournaments, including those of Magnus Carlsen and St. Louisan Fabiano Caruana. As opponents in 2018, the two grandmasters played twelve consecutive draws against each other, their counterattacks so perfectly matched that neither grandmaster could break the stalemate without the help of a tiebreaker.

At the Board of Aldermen, it is the president's job to break ties on board bills and resolutions. It's also his job, argues former president Tom Villa, to ensure that the moves and counter-moves of lawmaking amount to more than a replay of past mistakes.

"The president of the Board of Aldermen, you can be as busy as you want to be," says Villa, who served two terms as president from 1987 to 1995. "Your tentacle is into almost everything."

The next president, Villa believes, will need friends in all the right places — now more than ever. A proposed soccer stadium and airport privatization plan have earned recent headlines, but Villa warns that it is the upcoming ward reduction, from 28 wards to 14, that should be keeping presidential candidates up at night.

"If you're the president, you're going to have to be really, really adept at trying to steer something through that is going to be as politically charged as anything you've ever seen in your life," he says.

Pushed by, yes, Rex Sinquefield and approved by voters, the reduction calls for the redrawing of ward boundaries by 2020 to cut in half the city government's 28-ward structure. The measure remains controversial, and some north city aldermen are backing efforts to reverse (or re-do) the 2012 vote, alleging that the reduction represents "organized gerrymandering" that strips power from black neighborhoods. Whoever wins the March 5 primary, Villa says, will have to deal with a bitter fight over the 2012 vote and the lines of the new wards.

Some positions are less fraught. Like Reed, Villa supports plans for a soccer stadium for an as-yet unconfirmed MLS team. Villa considers it the sort of deal a board president should be backing.

But Villa considers airport privation as something between a scam and a farce. "If it were a cutting-edge idea, somebody would have cut the edge long before the city of St. Louis got to it," he says. "The way this thing is structured is ridiculous."

Behind the high-priced consultants touting airport privatization, is, again, Sinquefield, and the potential conflicts inherent in letting a libertarian billionaire shape city policy are made even worse by what Villa sees as poor judgment by city officials.

Slay, for instance, struck a deal with Sinquefield to have the financier underwrite the hiring of airport privatization consultants, saying Sinquefield would be repaid if the deal goes through. That left the consultants with a big incentive to push for privatization, whether or not it's a good deal for the city. Even worse, soon after Slay left office, he himself was hired by a Spanish firm considering a bid to lease Lambert.

Villa says he's "disappointed [Slay] has opted to be involved in the process." Similarly, Villa questions why Slay's successor, Lyda Krewson, didn't drop the privatization push once she took office.

And then there's Reed, who at the last minute threatened to block an E&A vote authorizing the privatization consultants' hire — only to drop his opposition when the firms of two campaign donors were added to the contract.

"That's not a stroke of political genius," Villa remarks.

It's unfortunate, because St. Louis could really use some political genius right now. In the lead-up to the 2017 mayoral race, Villa, then recently retired from the board, was quoted remarking the city didn't need another "caretaker" mayor, but a bomb-thrower.

Both challengers to Reed could play that role. Of Green, Villa says, "the status quo isn't in her thesaurus," and he notes Nasheed's advantage in a lengthy career as a lawmaker and political fighter. "She's not a shrinking violet."

Whether it's Reed, Green or Nasheed, the board president will have to be ready to use everything in their arsenal, and without much of a grace period to find their footing. They'll be confronted with rapacious developers and machinating billionaires and the revolving door of City Hall. Villa predicts hard choices ahead.

"What a political minefield!" Villa says. For the winner, "It'll be like saying 'congratulations' and handing you a box of hand grenades. And they're all ticking."

Editor's note: A previous version of this story misstated Tom Villa's tenure as Board of Aldermen president. He left the job by his own volition after two terms; he was not beaten by Francis Slay. We regret the error.