Today brings news that the St. Louis Cardinals have acquired Joel Pineiro from the Boston Red Sox in exchange for cash and a minor league player to be named later. The move is intended to shore up the Cards' struggling starting rotation. 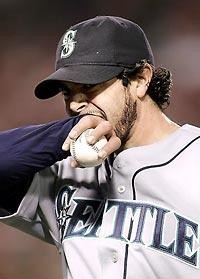 In this case, however, I can confidently state this will not end well. Joel Pineiro sucks. Bad.

Mariners fans have long speculated that steroid use may have contributed to Pineiro's success early in his career, particularly in 2001, when he posted a 2.03 ERA in 75 innings. Since then, however, he has gotten increasingly worse, peaking last year when he rocked an ERA of 6.36 and a record of 6-13. He did nearly lead the league in one category -- earned runs allowed: His tally of 117 was third best, er, worst.

As Jeff Sullivan of the popular M's blog Lookout Landing wrote when analyzing whether the M's should retain Pineiro's services after 2006, "[Maybe] he can bounce back a little in 2007, but the rest is just Joel being really really bad at what he does."

This year he has posted an ERA of 5.03 in 34 innings as a reliever for the Red Sox. Boston briefly considered using Joel (pronounced Joe-EL) as a closer before the season started (presumably because they never saw him pitch before acquiring him on a one-year $4 million contract). Needless to say, the experiment was short-lived.

The bottom line: Pineiro has a mediocre repertoire of pitches, little command of anything he throws, and a proven track record as a loser.

In other words, he ought to fit in nicely with the rest of the current Cardinals rotation.