Is God Really Dead? Or Did We Make God Up Inside Our Head? 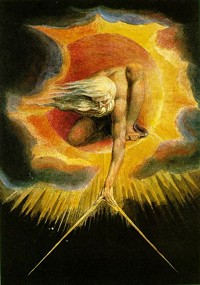 William Blake
Anybody out there?
Just two months ago, President Obama identified non-believers as a legitimate religious group, right up there with Jews and Hindus.

But watch out, non-believers! An article in New Scientist claims that you are just deluding yourselves. Human beings are hard-wired to believe in...something.

In the past, scientists, when they've bothered to consider religion at all, have argued that religion is an evolutionary adaptation that helps humans band together and sets up a series of cultural taboos that may keep them safer, especially in uncertain times.

But now some, including Washington University psychologist Pascal Boyer, claim that the brain naturally distinguishes between the physical, or natural, world and the spiritual, or supernatural.

Boyer thinks this function of the brain is what allows us to have imaginative interactions with invisible friends, fictional characters, dead ancestors -- and spirits and gods.

Boyer points out that people expect their gods' minds to work very much like human minds, suggesting that they spring from the same brain system that enables us to think about absent or non-existent people.

The human brain also has a tendency to seek out patterns and cause-and-effect relationships where there are none. Researchers who work with very young children who have yet to hear about religion found that the children believe that natural phenomena are caused by supernatural forces -- in effect, they invent the idea of a god spontaneously, says Olivera Petrovich, a scientist at Oxford University.

The will to believe never quite goes away.

Petrovich adds that even adults who describe themselves as atheists and agnostics are prone to supernatural thinking. [Jesse] Bering [of Queen's University, Belfast, UK] has seen this too. When one of his students carried out interviews with atheists, it became clear that they often tacitly attribute purpose to significant or traumatic moments in their lives, as if some agency were intervening to make it happen. "They don't completely exorcise the ghost of god  -- they just muzzle it," Bering says.

Belief in the supernatural -- or at least significant cause-and-effect relationships -- only grows during hard times. An experiment last year at the University of Texas at Austin and Northwestern University showed that people who feel a loss of control are more likely to look for patterns.

This would explain a recent article in Slate about the increase in elf-spotters in Iceland after the nation's economy collapsed. (See also the fabulous success of He's Just Not That Into You, which makes a brave attempt to demolish the sort of magical thinking that establishes a relationship between staring at the phone intently and the probability that it will ring.)

The scientists admit it will probably be a while before they discover the true origins of religion. But this could open up a whole new philosophical can of worms: could a God that exists in our heads still be considered dead?