Is This Cahokia Mounds Shit Important? 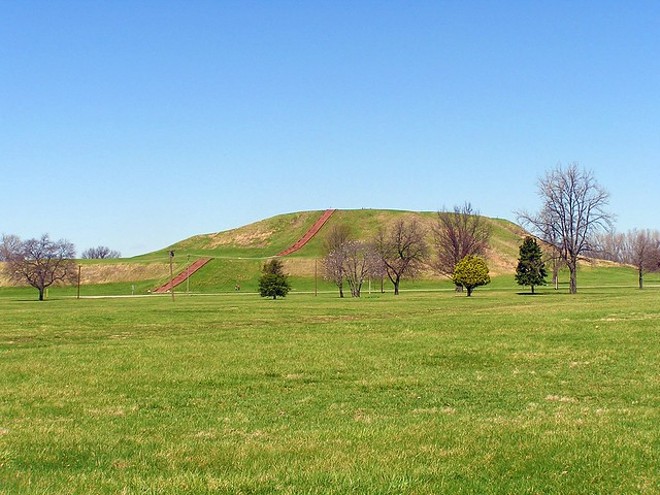 Cahokia Mounds State Historic Site is a wonderful resource for educating young students about the settlement known today as Cahokia, but as it turns out, it’s even better at igniting debates. Recently, a doctoral student named AJ White at the University of California-Berkeley published a study in American Antiquity, an archaeology research journal, about the ancient settlement at Cahokia Mounds.

In 1250 AD, the prehistoric city was larger than London. Today, the mounds span three and a half square miles (about 2,200 acres), but in its prime, the city was about six square miles. In the large settlement, there was anywhere from 10,000 to 20,000 people. Then, the population slowly declined until the late 1300s, when it was abandoned.

At least, that was the popular theory of the "lost civilization."

However, White claims that this theory of depopulation or abandonment among Cahokian people at the site is not necessarily accurate. Instead, White posits that the area reached a population minimum, then became repopulated from the years 1500 to 1700 AD. White came to this conclusion by applying a fairly new research method using fecal stanol data.

If you're not familiar with fecal stanol data, it's pretty much exactly what it sounds like, sourced from tiny molecules found in the gut of human beings. Using a metal tube, White extracted ancient human feces and judged population numbers based on that information. White culled this data from nearby Horseshoe Lake.

One of the reasons White chose to study the ancient settlement is because of the research that has already been done on the Cahokian people who lived there as a basis for comparison. In addition to this practical reason, White also accomplished one of his dreams while conducting his research.

"It's really freaking cool to work at Cahokia," White says. "It's an honor, really. It's one of the most well-known, studied and just impressive archeological sites in the entire country. The fact that I can be involved with it is just a dream." However, professors dedicated to the study of ancient Cahokian peoples are saying that the discovery, as reported by St. Louis Public Radio and the Belleville News-Democrat, is mainly hype. Timothy Pauketat, a professor of anthropology at the University of Illinois, says White’s study is problematic. Pauketat has studied Cahokia Mounds since the early 1990s and has published several papers and books on its history.

“In my mind, the story shouldn't have even made it to print," Pauketat says. "It should've gone, 'Okay, that's a hypothesis you developed because you saw a blip in the fecal stanol data.' And, 'Is there any other data to back that claim up?' should've been the question. If you read the study, there's not. In fact, it’s the opposite."

Pauketat explains that there's not much difference between what's shared in the study and what archaeologists already know. They are aware that the Cahokian population was still living on the site in the 1400s and that some Native Americans from the North as well as Europeans had settled there for a brief time before leaving. Pauketat points out two key problems with the research: the method of dating for the deposits and the chance of the data collected not being directly put into nearby Horseshoe Lake. The deposits analyzed could have been runoff from flooding or rainwater, Pauketat explains, so that makes it more difficult to determine where the ahem, poop, actually came from.

"I could imagine where those dates are off by 100 years," Pauketat says. "The ones they think are in the 1500s could actually be from the 1400s." Instead, Pauketat suggests sticking to the research archaeologists have already conducted. In the past, archaeologists have used radiocarbon dating, the method of determining the age of an object using radioactive isotopes, to determine who was living in the ancient settlement during various time frames throughout history. Pauketat points out that the city itself remained depopulated. "It shouldn’t have been published until he went and got another line of evidence where he could say, 'Oh, look, I know that there are some people in the region,' even if it's not much evidence," Pauketat says. "Because generations of archaeologists say the opposite."

"That paper has been misrepresented and over-hyped," Pursell says. "Specifically, it doesn't show that the mounds were not depopulated. They were depopulated. The paper calls it the 'Cahokia population minimum' instead of saying clearly that there was no one there."

Pauketat predicts there will be a rebuttal for White's study. With the research that archaeologists have done in the past on Cahokia, Pauketat says it will be hard to ignore White's study.

"There are so many archaeologists, and they based so much of their career on getting the historical facts. To have somebody come in and say, 'Actually, I'm not going to pay attention to those facts, but I got this evidence that maybe suggests your facts are wrong,' is going to be greeted with people saying 'No, they’re not,'" Pauketat says. "They’re going to point to the radiocarbon dates and the sites we found and they will effectively counter his assertion."

Pauketat says there's one positive to come out of this study: a further discussion about the 'Vanishing Indian Trope.' Pauketat and White both described the trope as a dismissal of Native American history and those peoples' claims to land taken from them by European and American settlers. In simpler terms, the narrative is that Native Americans simply disappeared or abandoned settlements instead of being forced off their land by colonizers.

"I want to almost compliment, agree on [the confrontation of the trope] generally speaking," Pauketat says. "It's really relevant in some parts of the United States — but not at Cahokia."

"The exciting part of the paper, for me, is that the repopulation of the nearby region may happen a little earlier than I thought," Pursell says. "Otherwise, from a Cahokia archaeology perspective, it's basically just a new data set showing the same thing we already knew. So, good to know, useful new supporting data about the new inhabitants moving in after 1500 AD, but it tells us basically nothing about Cahokia itself." At the Cahokia Mounds State Historic Site, Lori Belknap, the superintendent of the site's interpretive center, says not much will change. The center interprets the culture of the site dating at about 1000 AD through about 1350 AD. White's study is focused on people living at the site about 200 years after that time period.

"During [this] time we would expect to see evidence of small groups of Native Americans living in the region," Belknap says.

As for White, despite the professional criticism of some of his colleagues, he believes that the study has something valuable to contribute to the legacy of the ancient Cahokian people who once built an extraordinary city and the breathtaking mounds still intact today.

"I’d only add that I appreciate that many scholars are well aware of a post-Cahokia indigenous presence in the region, but I’m not sure that the public is," White says. "I think it’s worthwhile to discuss this lesser studied time period."

Jenna Jones is one of the digital content editors at the Riverfront Times. She would love to talk to you about Harry Styles.
Scroll to read more St. Louis Metro News articles (1)