Is Woodson Terrace a Hotbed of Political Corruption? 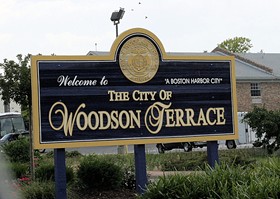 Image source
Does anyone out there know what the hell a "Boston Harbor City" is?

Things are usually pretty quiet up in the north county suburb of Woodson Terrace, population 4,200. Mayor Lawrence P. "Butch" Besmer has been in office since 2006, his position mostly unchallenged...that is until two weeks ago when Kathy Wheeling ran against him.

Besmer won re-election on April 6. His campaign hinged on Woodson Terrace's terrific financial health since he took office, the best it had been, he claimed, since before 9/11. Three days later he eliminated one of the shop foreman positions in the department of public works "for financial reasons." The man who lost his job was Micah Jacquemin, a friend and supporter of Wheeling.

Was it just simple economics or was it political retribution?

"I had two supervisors making $100,000 a year between them," Besmer told Daily RFT somewhat irritably. "Do you think it's financially responsible to pay $100,000 for two people to supervise six employees? It's public works: digging holes, cutting grass."

Wheeling doesn't believe this reasoning. "My fear is that this of the first of many actions he'll take. He has complete control. Everyone is afraid of him."

Wheeling has been active in Woodson Terrace government for the past year, ever since she and her husband Brad attended a city council meeting after their home got broken into. She took an instant disliking to Mayor Besmer.

"Someone got up and complained about a sign," she recalls. "The mayor's face got red. He pounded the table and told her to sit down and shut up."

Nonetheless, Wheeling and her husband agreed to head the Woodson Terrace neighborhood watch committee and became regulars at city council meetings, where they got along pleasantly enough with the other regulars, including members of the Besmer-appointed board of aldermen.

That all changed earlier this year, Wheeling claims, when she filed to run for mayor herself. "I went to the February meeting. It was like The Scarlet Letter. They wouldn't talk to me. It's an old-boys club in Woodson Terrace. It's a whole board of yes-men and say-nothing women."

Wheeling's campaign platform included a plan to cut the mayor's salary. She didn't get much support among the city employees. "They didn't want to come out because of fear of retribution," she says. "I was like, 'Are you kidding? Is this the wild, wild west?' They said he would talk to people about having my yard sign. It was not friendly banter. It was meant to be intimidating."

Jacquemin was not vocal about his support for Wheeling, but the two had been friends for a long time.

Wheeling campaigned vigorously, going door-to-door and dropping in at town events where, she says, she didn't see Besmer. The mayor, instead, sent a letter to all 4,200 of the town's residents trumpeting his achievements. On election day, he won by more than 100 votes out of 800 cast.

Three days later, Jacquemin received notice that his job had been eliminated. Previously, he had been demoted from his position as director of public works after an investigation into money missing from the department's kitty fund. (Police determined that all the money was still there.) He believes the investigation was prompted by a fellow employee who was bitter because Jacquemin had asked someone else to serve as director when he went on vacation.

"[Besmer] said he didn't think I had what it takes to run public works," Jacquemin says. Jacquemin's demotion also involved a $12,000 pay cut, though the mayor did appoint him to a second position as an administrative assistant.

The loss of his job last week came as a complete surprise to Jacquemin. He has been working for the city for fifteen years, his entire adult life. "I was a good, solid, high-performing employee for fifteen years," he says. "I won awards. It's a bummer. I used to tell the staff I was going to retire here."

Wheeling, meanwhile, plans to continue her work in Woodson Terrace politics. She's been keeping a blog about her activities and will continue to go to meetings. "I'm going to show up [to the next city council meeting] and see how our tax money is being spent. If I'm not there, I can't complain."