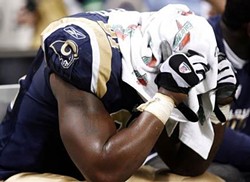 As if we needed a study to confirm this.
A new study by the media-research firm Nielsen Co. confirms what you may have expected about the St. Louis Rams. Not only does no one in St. Louis care about the team but neither does a national audience.

The study specifically looked at last year's season and measured the following factors for all 32 NFL teams: local and national TV rankings, mentions on the Internet and visits to the teams official website. St. Louis earned an index sum of 22 points -- 78 lower than the No. 1 team in the Dallas Cowboys.

News of the study didn't surprise Rams officials. "When you've won as much  as we have recently, it's not surprising," Kevin Demoff, the Rams v.p. of football operations told the Wall Street Journal yesterday.

Of course, like any study, this one has its flaws. For one, it automatically favors winning teams that are more likely to be televised nationally and attract bigger audiences. Two, teams from bigger cities -- Chicago, New York and Boston -- are bound to attract larger local viewers no matter their W-L records. Also, the study only took into account just one year's worth of data.

Still, as the Journal reported yesterday, a less-scientific study over the past two decades suggests the Rams have remained unpopular for decades. Since 1992 a company called Harris Interactive has asked fans to name their favorite teams. The Rams have routinely scored in the bottom five of all teams.

Perhaps, we'll do better this year if we can string together more than just one or two wins. As Marshall Faulk told the Journal yesterday, "everybody in the city loved us" back in the halcyon seasons of 1999 and 2001.