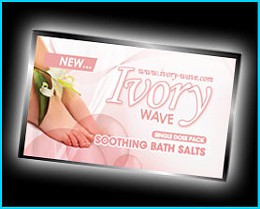 am-hi-co.com
Bath salts now banned in Bath, and the rest of the UK.
Is there any end to the number of new fake drugs on the market? Earlier this year the synthetic marijuana, K2, was all the rage in Missouri and much of the United States.

Now it's Ivory Wave, a drug marketed as "bath salts" but frequently snorted like cocaine. Ivory Wave has been blamed for several deaths in the U.K. (Exhibit A, B) and is now banned throughout Great Britain.

Recently the drug has made its way to the states, and can reportedly be found in St. Louis at the Overland headshop with the truly remarkable name of Smoke Sensations Nights of Rave.

A St. Louis mother says her daughter recently purchased the drug at that store and then went completely bonkers. The girls is now in the pysch ward of a hospital, according to Fox 2, which delivers the following report...