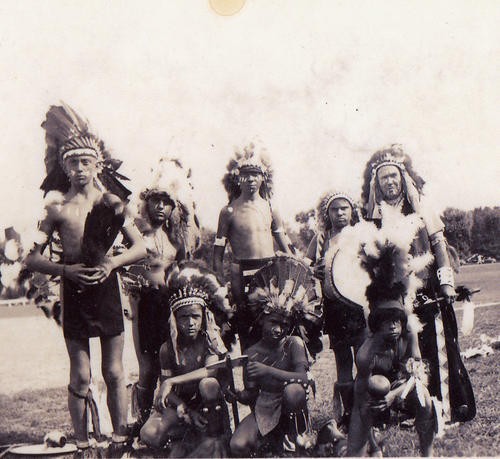 courtesy Kevin Airis
Thomas Airis (far right), grandfather of Kevin Airis, and his dancing troupe. All are wearing some of the now-missing artifacts.

It's been nearly a year since the Missouri Supreme Court put an end to the legal battle of Airis v. the Saint Louis Science Center. The court decided to uphold an appellate court ruling that the science center had not stolen or misplaced 36 Native American artifacts, worth several million dollars, that had once belonged to Kevin Airis's grandfather and which the Airis family had entrusted to the museum for safekeeping back in 1974.

In a 2010 Riverfront Times feature story about the case, Kevin Airis put the blame for the missing heirlooms squarely on the shoulders of James Houser, who was the museum's curator at the time. He quoted Houser's successor, Melinda Frillman, as saying that Houser had been a careless administrator and a poor record-keeper.

The charges wounded Houser, says his daughter Carole Bartoo. "My dad is holding on to hope that somehow something will be printed that will 'clear' his name," she writes in an e-mail. Now she has sent along three documents that she and her father hope will do just that.

Houser was unable to speak up while the lawsuit was still underway. Two of the documents did not come to light until after the investigation for the initial lawsuit and, therefore, were not mentioned in the Riverfront Times article.

The first is a receipt from October 13, 1975, which states that the science center was returning a collection of artifacts, original received on permanent loan on March 7, 1974, to Thomas Frank Airis, Kevin's father. The receipt is signed by both Houser and Thomas Airis. Among the items listed are a papoose carrier, a Peyote fan, a gourd rattle, three beaded breechclouts and three beaded vests. None of these items appeared on the science center's inventories from 1979 or 1989.

The second document is a page from Houser's diary: October 13, 1975. The first item on the list of the day's activities, noted in the curator's precise handwriting, reads: "Thomas Frank Airis picked up Indian beadwork, loaned 3-7-1974."

Thomas Frank Airis died in 1991, apparently without telling his wife Jewel or his son Kevin that he'd picked up the artifacts. Kevin, for his part, believed that the receipt was forged and went so far as to take it to a handwriting expert for confirmation. The court was not swayed.

She told us [Houser] had kept such bad paperwork that he did not keep records of the donors, of the objects that were brought in, that it made her job a living hell, in her exact words. That she had been working to try to do an inventory to try to straighten out his paperwork. That he was not respected at the museum. My son and I walked out of the building and went, "Can you believe she would say that?"

"My father was particularly upset that Mr. Aires [sic] was quoted-as-quoting-her saying my father was a terrible record keeper, etc., etc.," Bartoo writes. "He says she called him, distraught, explaining she was unable to actually be quoted because of Mr. Aires [sic] lawsuit, but that in this deposition she clearly says my father was an excellent caretaker and very trustworthy."

The third document rectifies that misunderstanding: It's Frillman's deposition from the first round of the Airis lawsuit.

"My opinion of [Houser] is that he's extremely professional, that he is extremely knowledgeable, that he's a very good person, and that I would trust him with the collections currently," she told Airis's attorney, Kevin Kasper. She adds that she believed Houser kept accurate records of the collections when he was curator of the science center.

The courts appeared to agree -- if not about Houser's competency as a curator, but that, whatever happened to the Airis artifacts, he was not responsible for anything after October 13, 1975, when he returned a pile of items to Thomas Frank Airis.

On a personal level, however, the whole lawsuit was wounding to Houser, now in his early 80s. He felt it called into doubt his entire career at the science center.

Writes Bartoo: "It is so important to my father that he not be remembered as having stolen history and ruined the public trust as this awful man [Kevin Airis] seems to want people to believe, when James Houser spent the whole of his adult life bringing joy, education and enthusiasm for history to the people of St. Louis for the nearly 30 years he served as curator of the Museum of Science and Natural History at Oak Knoll Park."

View Houser's documents after the jump: