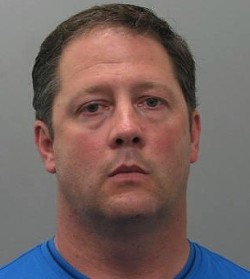 A St. Louis county middle school physical education teacher and high school coach is accused of having a "long term sexual relationship" with a minor -- seventeen years ago.

Allegations surfaced this summer, concerning acts that took place between August 1, 1996 and September 21, 1997, police say. At the time, the victim was a sixteen-year-old Lindbergh High female sophomore, who had Wilder as her girls cross country and track coach, cops say.

She apparently had a "mentor/student relationship" with him, officials note.

Wilder coaches at the high school today and also teaches gym at the middle school -- where he has been employed for twenty years.

The probable cause statement doesn't have a whole lot of detail, but says that Wilder engaged in oral sex with the victim multiple times when she was sixteen.

Some of the acts may have happened at Lindbergh High School, according to the Post-Dispatch, which notes that Wilder was arrested in 2008 for sex abuse allegations involving a different girl, but wasn't charged.

The counts are considered Class C felonies, punishable by up to seven years behind bars. Wilder lives on the 800 block of Totem Woods Court in Manchester, police say.

Beth Johnston, director of community relations for the Lindbergh School District, told the Post, "We are troubled and disturbed when we receive allegations such as this. We want our parents to know we'll do whatever we can to cooperate with police."

Here's the short probable cause statement from county prosecutors: