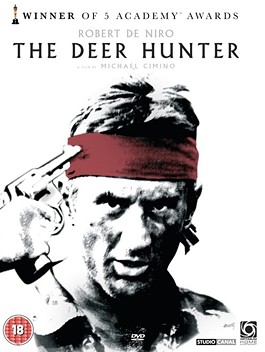 Image via
Sequels are never as good as the original.
Almost everyone has had a moment driving down a rural highway when a deer ambles into the roadway and freezes in the headlights. Most people slam on the brakes, honk the horn and thank God that they didn't kill the poor creature and put their car to the body shop in the process.

Jarrod Lee Hayn, however, is not your typical motorist. He reportedly filmed himself mowing down deer with his pickup truck in his hometown of Kampsville, Illinois (about an hour north of Alton) and then attempted to sell DVD's of the exploits entitled The Deer Commander - Sudden Impact.

Perhaps if he'd recruited Robert De Niro and Christopher Walken for the flick Hayn would be receiving Oscar buzz. Instead, federal prosecutors charged the 38-year-old with two counts of "possession of depictions of animal cruelty with intent to place those depictions in interstate commerce for commercial gain."

Hayn was indicted on March 11 by a grand jury in St. Louis. The indictment (available in full below) was unsealed earlier this month after Hayn's arrest. He has since posted bond and been released.

Prosecutors allege that Hayn "hit, maimed and killed" deer with a vehicle driven on public roads between April 15 and November 18, 2009 and attempted to sell videos of the acts online.

No trial date has been set but the case has a hearing in Eastern Missouri federal court scheduled for April 22. If convicted, Hayn faces up to three years in prison.
Jarrod Lee Hayn Indictment