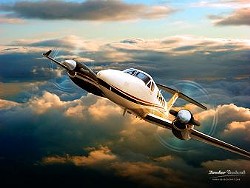 This was inevitable. Last week the new $5.6-million airplane allegedly purchased to shuttle Gov. Jay Nixon around Missouri was the talk of Jefferson City. And as any controversy goes these days, "PlaneGate" now has its very own Twitter handle @KingAirJay.

The first (and so far the only) tweet went out on Friday and tracked the airplane's flight from Rolla to Jefferson City using the website flightwaware.com. And while @KingAirJay has been fairly idle since its debut, the plane it intends to mock has not.

Records (below) from flightaware.com show that the nine-passenger turbo-prop has made seven trips since arriving to Missouri on January 18 from its manufacturer (Hawker Beechcraft) in Kansas.

Four of those flights (round-trippers to St. Louis) occurred on Wednesday and Thursday of last week. Nixon, for what it's worth, was definitely in St. Louis on Thursday. That same day state lawmakers held up the nomination of Nixon appointee Doug Nelson as commissioner of the Office of Administration. It's Nelson who approved the purchase of the airplane (paid for by funds from the Missouri Highway Patrol) and who is shouldering much of the criticism over the plane.

But who is behind @KingAirJay? Your guess is as good as mine. Whoever it is, though, needs to take a cue from the overachiever (and eater) at @BuffetJayNixon. You want to create some turbulence for Missouri's top pol? There's the model.